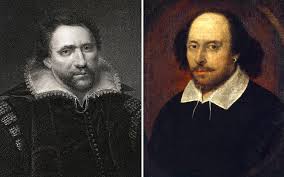 This month, in our time of modern-day plague, I shall not write yet one more claim that Shakespeare wrote King Lear or Macbeth while quarantined for the "pest," as they called it. (He did not.) Instead, I am offering my parody of a poem by Shakespeare's greatest rival, his brilliant contemporary, the playwright and poet Ben Jonson (pictured left of Will), who inhabited the early modern theater world alongside Shakespeare and enjoyed insulting him from his bully pulpit of the stage. All evidence suggests that Jonson and Shakespeare were friends, though they
varied greatly in their temperaments and in their ideas of how to write comedy. In fact, plays by each written during the "Theater Wars" of 1598-1601 hilariously satirize not just each other's ideas, but each other. Shakespeare's melancholy Jaques in the 1599 As You Like It, with his penchant for useless social commentary, lampoons Jonson, while Jonson's Sogliardo -- a social climber from the country with a new-bought gentleman's crest, in his 1598 Every Man Out of His Humour -- is a parodic figure of Shakespeare. It's hard to know how tense Jonson's and Shakespeare's relations sometimes were, or whether the mutual mockery was all in good fun. We can only guess it was good for business. We also can't know whether Shakespeare was ever a guest at one of Jonson's famous poet-gatherings at London taverns, attended by aspiring writers who called themselves the "Sons of Ben" (Robert Herrick was one). At eight years Jonson's senior, Shakespeare is not likely to have considered himself one of Ben's "sons," and whether his spirit lent itself to the kind of convivial festivity we see among Sir Andrew Aguecheek, Feste, Fabian, and Sir Toby Belch in Twelfth Night is part of the mystery surrounding Shakespeare's private life. Still, I like to think the pair hung out together on occasion, and such possible tavern episodes are the basis of scenes in two of my novels about Shakespeare, Will and Gunpowder Percy.


INVITING A FRIEND TO SUPPER IN KALAMAZOO, MICHIGAN, APRIL, 2020

Tonight, my friends, my dusty house and I
Do equally desire your company,
Though ’tis illegal now to hold a party,
Since dread as deep as Holmes’ of Moriarty
Governs assemblies, and chills family meetings,
Casts doubt on friendships, and stills jovial greetings.
Despite that, bearing fresh dust masks and spray,
We’ll plan a banned, illicit holiday.
But where to get the beer? Oberon’s lacking.
A trip to Bell’s might get the township tracking
My vehicle, and strict town sheriff crying,
“Is amber lager worth the risk of dying?”
For carry-out, there’s Saffron, for to pick a
Fine chutney, though they’re out of chicken tikka.
Some wine I’ll serve, actual, though now potential,
If I can make that errand seem essential.
We’ll fear no plague at our convivial feast,
We’ll sit, aye, six feet distant, at the least.
My man will scrub the tarts (if we can get ’em)
And not doff plastic gloves. We will not not let ’im.
Fear not that I’ll read poetry. All verses
On paper, whether elegies or curses,
Are now stored in the bathrooms, behind locks,
Placed there to reinforce our dwindling stocks.
No civic spies, no tell-tales, we’ll allow
At table, to inform good townsmen how
We broke the rules of quarantine, all sitting
At board together, social talk permitting.
How would they know? They cower in their dens,
Consuming Netflix, eating M&Ms.
Yet we’ll stay safe, some garbed in haz-mat suits,
Sneezing in elbows, disinfecting fruits,
Hands sanitized, waving across the room,
Thinking, perchance, we should have met on Zoom.
All things must pass. Tonight we’ll drink to that:
To Lysol, latex, and a curve that’s flat.

Posted by Grace Tiffany at 6:40 AM