An Easter Meditation on UnShakespearean Language 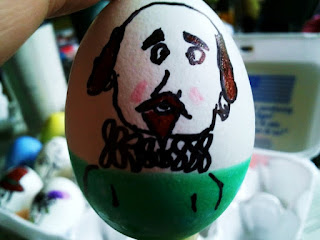 Every April Fool's Day I used to post a joke article about Shakespeare that I thought was funny, even if nobody else did. The first one, in 2013, was a claim that a missing scene from Romeo and Juliet had been found. Then there was the one about Macbeth's remains having been located in a supermarket freezer in Aberdeen. I'm not going to write a joke post this year, because too many people always think they're real, and also because nothing seems incredible enough to be amusing since Donald Trump got elected president. That was when irony died. I considered, "Donald Trump Claims MAGA Speeches More Popular than Shakespeare's Hamlet," but the only incredible thing about that headline is its implication that Trump has heard of Shakespeare. Then I thought, maybe, "Banquo's Ghost Authored The Art of the Deal," except I think that is actually true.

So, in lieu of a joke post in the month of Shakespeare's 455th birthday, I'm going to make yet another list of modern terms and phrases which I don't like, and which I'm convinced Shakespeare would make fun of. There are so many! But, as in the past, I've limited my list to ten.

1. A piece of whatever. People who are speaking publicly in front of other people about some allegedly important subject, whether they are on the radio or the TV

Read more »
Posted by Grace Tiffany at 5:36 AM No comments: