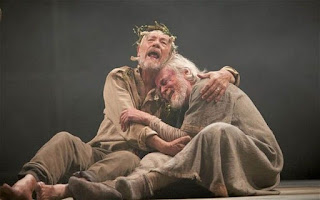 Indeed, English Renaissance writers tended only to fantasize about what we would call socialism. In his 1513 Utopia, Thomas More envisions a society in which all property is equally shared, but in real life, he lived in a manor, and expended no effort, in his influential role as Lord Chancellor, to urge laws that might redistribute royal wealth, or the wealth of privileged men like himself. In The Tempest, written nearly a century later, Shakespeare's kindly old nobleman Gonzalo imagines a "commonwealth" where there will be neither riches nor poverty, no commerce or forced labor, and no "sovereignty," but places himself as "king on't," as though "the latter end of his commonwealth forgets the beginning." Renaissance literature is full of ideas about equalizing wealth and eliminating poverty, but the ideas are always
humorously or wistfully framed. They are exhortations to kings to be saintly reformers who exercise extreme charity, or they are expressed by unrealistic would-be social reformers (like Gonzalo), or by dreamers who, if more logical than Gonzalo, lack all power to bring their proposals to pass.

But the idea -- or the ideal -- is still there. Here are a few Shakespeare passages where it's articulated.

"Why, I have often wish'd myself poorer, that I might come nearer to you. We are born to do benefits; and what better or properer can we call our own than the riches of our friends? O, what a precious comfort 'tis to have so many like brothers commanding one another's fortunes!"
Timon, Timon of Athens

"They say he is already in the Forest of Arden, and a many merry men with him; and there they live like the old Robin Hood of England. They say many young men flock to him every day, and fleet the time carelessly, as they did in the golden world."
Charles the Wrestler describes Duke Senior's money-free wilderness court, As You Like It

"If [this bill] pass against us, / We lose the better half of our possession; / For all the temporal lands, which men devout / By testament have given to the Church, / Would [Parliament] strip from us [for] / relief of lepers, and weak age / Of indigent faint souls past corporal toil .... "
The Archbishop of Canterbury, Henry V

"He hath left you all his walks, / His private arbors and new-planted orchards, / On this side Tiber; he hath left them you, / And to your heirs forever -- common pleasures, / To walk abroad and recreate yourselves."
Mark Antony, Julius Caesar

And finally, two from that most socialist of plays, King Lear:

"Poor, naked wretches, whereso'er you are, / That bide the pelting of this pitiless storm, / How shall your houseless heads and unfed sides, / Your loop'd and window'd raggedness, defend you / From seasons such as these? O, I have ta'en / Too little care of this! Take physic, pomp, / Expose thyself to feel what wretches feel, / That thou mayst shake the superflux to them, / And show the heavens more just."
King Lear, King Lear

"So distribution should undo excess, / And each man have enough."
Gloucester, King Lear

And each woman, too, we might add. For centuries poets like Shakespeare have imagined economic equality, the "shaking" down of the "superflux" or  "undoing" of "excess." But who will begin it?
Posted by Grace Tiffany at 8:22 AM