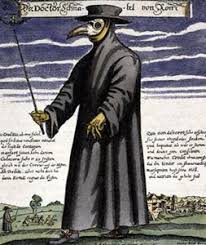 In the late sixteenth and early seventeenth centuries, when Shakespeare was writing his plays and living, for the most part, in London, plague was an occasional but expected social evil. At various times from the middle ages through the seventeenth century, the bubonic plague moved from country to country via flea-bearing vermin on ships, and so entered port cities, London being one, and spread from there. Those who could afford it, or had rich friends who owned country manors, fled the town. Those less fortunate "sheltered in place," or didn't, in London, and many caught the "pest." The proportion of fatalities was astronomically higher than any nation is experiencing from Covid-19. In the 1592-93 outbreak, ten percent of the London population died. By comparison, in New York City at the time of this writing, fewer than two-tenths of one percent of the population have died of Covid-19. Not as many people recovered from the plague as now get over Covid, though a lot did, especially as its strain apparently mutated and grew less virulent. People could hope.

There was a second outbreak of plague in London while Shakespeare was there, in 1603, and a milder one in 1605. During none of these plague years did civic authorities outlaw church services, and they rarely interfered with people's shopping, but they did outlaw morally sketchier gatherings in which people pressed
close to one another. Playhouses and "leaping houses" -- brothels -- were torn down. With their livelihoods at stake at these times, playing companies frequently hit the road, performing in town halls and market squares throughout England. In 1593, Shakespeare might well have done a stint as a traveling player, though by 1603, he was wealthy enough not to have had to.

England crowned a new monarch, James I, in 1603, but because of the plague, he refused to come down to London to reign until 1604. Queen Elizabeth had died (not of plague) in the spring of 1603, but her successor, Scottish James, would do no more than dip his toe into England until the plague numbers had gone down. He had himself crowned at York, just south of the border. Not until after his triumphal entry into London would Shakespeare's company perform as the King's Men, with James as their official patron.

Many London poets contributed to the celebration of James's post-plague arrival with songs and recitations. We have no record of any contribution by Shakespeare, but among those first in line to flatter the new king was Ben Jonson, mentioned in my last post. Records of the triumphant procession refer to encomia presented to the king at Fenchurch Street, poetic speeches written by Ben Jonson, who, like Shakespeare, would be a favored artist at James's court. We can wonder if, while writing these, the career-minded Jonson was struck by any guilt over the fact that he had left town the year before, for the home of a wealthy patron, leaving his own family to try their luck in London. His young son died of plague in 1603, with his father absent. The lad posthumously received a poem for his pains (Jonson's short, sad "On My First Son").

Shakespeare too had by then lost a young son, the eleven-year-old Hamnet, though Hamnet lived not in London but in the Midlands town of Stratford, and we don't know how he died. Loss of children to disease was common. Shakespeare himself might easily have been taken by plague as a child, and we never have heard of him. Two of his siblings died of it, in the late middle of the sixteenth century. Will was apparently plague proof. As a child, and in London in 1592, 1593, 1603, and 1605, he proved immune. Or anyway, he didn't get it. He lived to write thirty-seven plays and one hundred and fifty-four sonnets, none of which seem much concerned with plague at all. There are stray references to "takings" (away of life) and to a "plague-sore" in King Lear, to houses in which plague victims were locked in Romeo and Juliet, to a "planetary plague" in Timon of Athens. Nearly all these references are metaphorical. They show an author less interested in the plague itself than in the emotional experiences for which it can be made to stand. "Plague-sore" is just another insult Lear hurls at his daughter (along with "carbuncle"). As far as diseases go, Shakespeare was much more interested in the sexually transmitted ones. The lewder characters in his history plays and in some of the darker comedies (like Measure for Measure and Troilus and Cressida) are always complaining about the pox.

Shakespeare lived to be 52. We don't know how he died, but to us it seems he died young. And, in fact, he did. Despite what many people think, there were, in Shakespeare's time, men and women who lived into their eighties and nineties. (His own daughter, Judith, lived to be 77.) But such long-livers were not the norm. In the sixteenth and seventeenth centuries, too many diseases lay in wait for you, and folks lacked anything like vaccinations, let alone antibiotics. If you managed to get born alive, and made it out of infancy and childhood, you might still be laid low, by plague, or by a sweating sickness or a consumption, by the bloody flux, by spotted fever or "surfeit" (pox). If you were female, you could die in childbirth. One seventeenth-century month's register attributes 954 deaths to "teeth."

Maybe this -- the prevalence, variety, and proximity of threats to life -- is why the plays Shakespeare and other playwrights wrote during the plague years are not overly interested in plague. Those playwrights weren't like us. In 2020, none of us can talk about anything else but Covid-19. That's because, as a friend of mine said recently, "Vaccinations have made us complacent." When that complacency is disrupted by a novel disease, all hell breaks loose.

But in early modern England, folks were used to the various deadly afflictions that smote them and their loved ones from all quarters. Plague was part of the background. To poets, it was far from the most compelling subject. True, Thomas Nashe wrote a short "Litany in Time of Plague," sounding the grim refrain: "I am sick, I must die, Lord have mercy on us." And another of Shakespeare's contemporaries, John Donne, evoked the bell signaling another plague-death to exhort his readers to a sense of brotherhood in suffering: "Ask not for whom the bell tolls; it tolls for thee." But in this play-mad city, no plays were written that focused centrally on the actual (and not metaphorical) bubonic plague, even during the seasons when it raged. Ben Jonson's 1610 The Alchemist, a comedy featuring a wily London con artist, uses plague as a brief plot device to get a rich man out of town so the con-man and his humorous associates can use the lord's fine London home as a base for their criminal antics. The play is about their antics. John Donne could complain, in a poem, to a busybody acquaintance that his activities didn't "add one more to the plaguey bill," a casual way of saying, "I'm not hurting anyone." Plague was a known bane. It was a recurrent distemper, a pest, another of fortune's slings and arrows. All in all, it was just one of the myriad ills attendant on being human.

Lord, have mercy on us.
Posted by Grace Tiffany at 7:35 AM