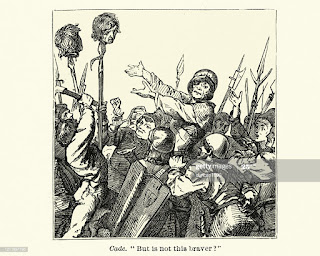 So, we may ask, in this day of angry crowds demonstrating and, sometimes, looting in cities across America, in the wake of the latest police murder of a black man --
What Would Shakespeare Think? And to begin to answer that question, we need to look carefully, not at one idiot like Jack Cade, but at the complex situations which give rise to demonstrations in Shakespeare, and the various ways those mob actions are performed.

Probably the most famous riot, and the least attractive depiction of a mob action, is that in Julius Caesar, where a violent and bloodthirsty band murders the innocent Cinna even after being made to understand he is not the guilty party whom they seek. Bent on punishing Caesar's assassins, one of whom shares a name with this Cinna, the angry mob won't hear Cinna's complaint that he is not that Cinna but "Cinna the poet." "Tear him for his bad verses!," they cry, and they do. Not Shakespeare's most appealing joke. This is the general Roman population, easily swayed by Brutus's arguments for Caesar's assassination, and then as easily turned against the assassins -- indeed, turned into assassins themselves -- by Mark Antony. Their depiction would seem to suggest Shakespeare held a low opinion of common citizens' ability logically to weigh arguments, restrain themselves from passionate action, and think for themselves.

But wait! These are Italians. Or rather, these are an Elizabethan Protestant Englishman's representation of Italians for his English Protestant audience. Are English crowds presented differently?

Well -- not necessarily. To address this question we look, again, at Jack Cade and his followers in Henry VI, Part 2. Here Shakespeare, himself from a working-class glover's son, lampoons Cade's "leather-apron" (tradesman) followers for being as excited about violence as his Roman citizenry would be when he put them on stage a few years later. The English crowd criticizes book-learning, champions illiteracy, and declares that only laborers should rule. As suggested above, their talk is full of nonsense, and their choice of Cade as a leader shows their inability to discriminate between reason and folly.

If we stopped here, we might need to assume that Shakespeare was a self-hating tradesman who saw only danger in gatherings of men of his class: that he saw commoners' assemblies as natural prey to the demagoguery of some manipulative leader, and easily tipped into violence. Certainly these plays show that Shakespeare was aware of this danger. Yet a broader look at his work reveals that the tendency toward unreasoning collective violence is, at least, not limited in Shakespeare to the lower classes. In Romeo and Juliet, the fine families of Verona are straw awaiting a spark, barely containable in their ardor for prideful duelling. The Montagues and the Capulets are gentry, but they're as hot-headed as Jack Cade. And in Henry V, the king makes plain that all the soldiers he leads into France, highborn and low, given license to kill, will lay waste to everything in their path. Maybe it was human nature -- or the nature of men -- that Shakespeare suspected.

Still, all this might simply mean that Shakespeare was not, finally, classist in his presentation of the destructiveness and unreasoning nature of mobs. What we want to know is whether Shakespeare ever presents assemblies of citizens in a more positive, reasoning light.

In fact, he does. In Richard III, crowds of Londoners repeatedly resist wicked Gloucester's attempts to manipulate them in the way Mark Antony easily manipulates the Romans. They express their staunch opposition to wicked Richard in private conversation with each other and with the audience. Richard's henchman Buckingham returns from Parliament complaining that he had to hire some people to cheer for their plot to overthrow of the legitimate monarch, since the rest "spake not a word," and only stared incredulously at their would-be rabble-rouser.

We also see a thinking crowd -- as opposed to an unreasoning mob -- in another play set, in all places, in Italy. Indeed, Shakespeare makes this Italian "mob" contrast markedly and positively with the insulting description of it given by the play's protagonist. The play is the late tragedy Coriolanus, set in the time of the pre-Imperial Roman republic. For all his admirable qualities, Caius Marcius Coriolanus, warrior and patrician, is marred by his incurable antipathy for the gathered people of Rome. Like Julius Caesar's snobbish patrician Marullus, who calls the Roman tradesmen "blocks, ... stones, ... worse than senseless things," Marcius insults the plebeians because they aren't soldiers, but, instead, folk who contribute to the welfare of the city in "contemptible" ways: they raise food, they make clothes, they build houses. To their faces, he calls them "curs" and "geese" and "dogs." It disgusts him that, having fought battles in Rome's name, he must then ask the non-combatants to approve his election to consul. He despises "popular man" and resents the custom that requires him to appear among a crowd and solicit their voices.

But this crowd, though despised, isn't despicable. They are reasoning and judicious enough to see the contempt would-be consul Marcius has for them, and to doubt his concern for their welfare. "Certainly, he flouted us downright," says one offended citizen. It is not their tribunes, who hate Marcius, but their own deliberations which lead them to withdraw their support for this arrogant Roman champion.

Further, while these angry citizens demonstrate -- for corn, at the outset of the play, and for Marcius's recall, in the play's middle -- they aren't violent and they don't loot. Who does? The only class of Romans Marcius pretends to respect: the soldiers. They follow Marcius to wage war on the Volscians, but -- also ironically -- earn their leader's contempt by pausing to enrich themselves (as soldiers have always done) with the property of those they've terrorized. "This will I carry to Rome!," says one, emerging on stage "with spoils." "And I this," says another. "A murrain on't! I took this for silver," says a third. Coriolanus finds his followers beneath contempt because they stopped letting blood to carry off "cushions" and "leaden spoons."

If the late play Coriolanus tells us anything about Shakespeare's attitude toward mobs and looting, it is that the subject was complex for him from the beginning. The proudly illiterate rebel leader Jack Cade of Henry VI, part 2, sprung from Shakespeare's pen before he was 30, but he wrote Richard III only about a year later. Julius Caesar came when he was 35. Coriolanus came nearly a decade later, close to the time of his retirement from the London theater world. For whatever reason, at varous times in his life Shakespeare was able to present a  "commonalty" who were less passionate in their judgments, and more rational, than the governors who looked down on them. By the character of Coriolanus and his ill fortunes, especially, we see expressed a profound skepticism for aristocratic hauteur, and even less admiration for war than we find in the ambiguous war-play Henry V (written around the same time as Julius Caesar). And while Coriolanus may invite us to share Marcius's contempt for looting -- for using some high-purposed action for personal gain -- the play also leads us to sympathize for the sneered-at common citizens who constitute the greater but most neglected part of any polity. The citizens of this play are more dignified than their patrician rulers allow, and their impromptu assemblies are not riots, but deliberate calls for justice.
Posted by Grace Tiffany at 7:29 AM