More Things People Should Stop Saying Because Shakespeare Wouldn't Like Them 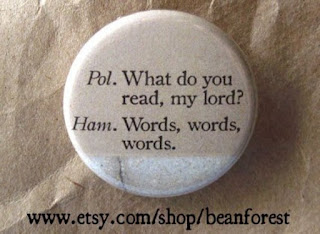 It's once more time for me to complain about words and phrases that I want people to stop using. Instead, people should read Shakespeare and find superior Elizabethan terms, and reintroduce them into our twenty-first century lexicon. Are you ready?

1. "Special ask": I heard this one over the radio during NPR's last pledge fund drive, as I was sitting in my car not pledging money because I assumed someone else would do it in my place. What confirmed me in the wisdom of my decision was the NPR fundraiser's suddenly making "a special ask to everyday listeners." If only she had made a special request, I would have stepped up to the plate. But I could not in conscience respond to a "special ask." In place of this vile term, I recommend what Orlando says in As You Like It
when he's really hungry and comes across some people eating venison in the woods: "Let me have it."

2. Pronouncing "negotiations" as "nego-cee-ations." This is not Spain. In the U.S.A., the double suffix "-tiations" is pronounced "shee-ay-shuns." There are no soft "c"s in "negotiations." Look again. LOOK AGAIN. Then ask yourself, "Why am I talking this way? What am I trying to sound like? What's wrong with me, that I would put aside things I learned in elementary school, and intentionally commit a basic pronunciation error? What are my character flaws?" Take a rigorous moral inventory.
Then, read Shakespeare's scenes where he makes fun of people trying to sound Continental. There are so many! Here's Rosalind, from (again), As You Like It, who says to Jaques, "Farewell, Monsieur Traveller! Look you lisp, and wear strange suits." (She's also making fun of English people who try to dress like the French. Shakespeare seems to forget that Rosalind and Jaques actually are French.)

3. "We're pregnant." No, happy couples. One of you is. Shakespeare may have lived 400 years ago, but he knew that men did not get pregnant. In fact, it's kind of a big deal in some of his plays, this fact that pregnancy is something that happens only to females, and further, that men, while they can always be confident that they are not pregnant, cannot really be sure they are the fathers of "their" children. Lacking paternity tests, Renaissance dads have to rely on trust, and, when trust fails -- as it does in The Winter's Tale and, quite possibly, in All's Well that Ends Well -- they must rely on physical resemblances. "[T]hey say we are / Almost as like as eggs," Leontes muses in The Winter's Tale, as he looks at his son. But that's no proof, because it's only "women [who] say so," and they "will say anything." Can't trust 'em. He's not really sure the new child his wife is presently carrying is his, either. All this is to say that Leontes would never claim, "We're pregnant." Nor should you, unless you are.

4. What's the difference between categorically denying something and denying something? Nothing. Or rather, five or six useless syllables. I love (as one of my graduate students once put it) "ruthlessly crossing out words on [students'] essay-pages." "Categorically" would be one of the first to go. Why? Because it's good to speak like Kent instead of Osric. Osric is the "waterfly" in Hamlet who (to borrow a phrase from The Merchant of Venice) speaks "an infinite deal of nothing," taking about thirty lines to deliver a challenge from Laertes to Hamlet. Kent is the loyal courtier in King Lear who speaks much more to the point-ly. "What wouldst thou?," Lear asks him. "Service," says Kent. "Who wouldst thou serve?" "You." In other words, just say it.


5. When did teachers become "educators"? Oh, I know. Around the time people guessed that doubling the syllable count added dignity to speech. It doesn't. For Shakespeare's view, see number 4.

6. I have not had the ill fortune to encounter this locution yet -- okay, okay, I mean I haven't had the bad luck to meet this word yet -- but a friend of mine says that in her job they are starting to speak of "learnings" instead of "lessons." Once we have assimilated all the learnings from our educators, we will be so smart! Thank you, but "I'll learn my lessons as I please myself," as Bianca says in The Taming of the Shrew. (I too am a shrew.)

7. I also hate when people on NPR talk about taking a "deep dive" into some controversy. This one really makes me cringe. It makes me think of dumpster diving, which is also a gross phrase, but which is at least intentionally gross. Instead of deep diving into a discussion of the recent government shutdown, why don't we just plunge into the subject gradually, first "knee-deep" and then eventually "o'er head and ears," as Leontes says? (The Winter's Tale, again.) That sounds safer and more hygienic.

8.  And while I'm critiquing NPR, could people please stop saying "drank the Kool-Aid" to describe any kind of wishful thinking? I happen to know someone who lost his wife and son in the Jonestown disaster, and even if I didn't, I would not see any reason why that horrible, painful tragedy should be turned into a funny little phrase to apply frivolously to political arguments. I'm sure by now most people don't even know what "drink the Kool-Aid" actually means, but they still say it. I once heard Diane Rehm interrupt a guest who used the phrase and say, "I really, really detest that phrase." Right on, Diane! Let's once more consult Leontes for superior wording. He says, "There may be in the cup, / A spider steep'd, and one may drink; depart, / And yet partake no venom (for his knowledge / Is not infected), but if one present / Th'abhorr'd ingredient to his eye, make known / How he hath drunk, he cracks his gorge, his sides, / With violent hefts. I have drunk, and seen the spider." I would love to hear someone on NPR say this instead of "I drank the Kool-Aid."

9. This next one reminds me of people in restaurants saying they are going to "do" a hamburger (see 2018 post). More and more, people are forgetting the sexual suggestiveness of things they are saying. This morning I received a robo-call from the garbage pickup company saying they would "service" our trash as soon as they could get to it. Now, if robots or garbage trucks want to have sex with people's refuse, I have no objection, but I don't need to be notified about it by phone. The fact is that "service" is either a noun, or it's a verb that means "providing sex for someone" (or for something, as the case may be). Evidence? See King Lear, where Edgar calls the lewdly inclined Oswald a "serviceable villain, as duteous to the vices of thy mistress as badness would desire." The implication is that he is available for sexual service as well as other kinds of monkey business. Again, I don't judge behavior, just diction.

10. "Calculus." People who use this word on the radio have no idea what calculus is. People who do know what calculus is never use the word on the radio. People who talk about the "different calculus" of the 2020 election think that if they say "calculus" they will sound smart, like mathematicians. What they mean by "calculus" is "some calculating thing." What does Shakespeare say? As always, he agrees with me. He only uses math metaphors when he knows what they mean. Here's an example from Henry V: "[S]ince a crooked figure may /Attest in little place a million, / ... let us, ciphers to this great [account], / On your imaginary forces work." This is a cool way of having an actor tell the audience, humbly, "We actors are zeroes, but think of how adding a bunch of zeroes can increase the value of any figure, and let us be those kinds of zeroes, and greatly influence your crooked imagination, in this great round theater that is also shaped like a zero but can likewise hold infinity."


I have an infinite number of additional complaints, but I'm stopping at ten.
Posted by Grace Tiffany at 5:48 AM