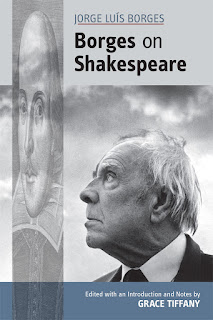 That tape is the only record of a talk Borges gave in Washington, D.C., on the occasion of Shakespeare's 412th birthday, in 1976. Borges himself was 77, and mostly blind. He was helped to the microphone, but, unfortunately, not helped close enough to the microphone. According to one eyewitness, the audience was too
reverent and awestruck to send someone up to adjust the mike once he had started speaking. So most in the crowd could not hear what Borges was saying. The audience member whose account I read claimed to have heard only the name "Shakespeare . . . Shakespeare . . . Shakespeare," repeated over and over, which he thought was Borges' way of suggesting that everything that could be said about Shakespeare had been said already.

That's a good story. It sounds like one of Borges'. But I have a better one. It, too, is Borgesian. My twenty-five passes through the audiotape, to which I listened through noise-reducing earphones, revealed to me that Borges said much more about Shakespeare that day than "Shakespeare . . . Shakespeare . . . Shakespeare." In his beautifully but thickly accented voice, he spoke of some people's strange inability to believe that Shakespeare wrote all his plays. As he had in some previous writings, both fiction and essay, Borges attributed that inability to the natural difficulty of imagining any single consciousness capable of inventing the vast variety of characters who inhabit the Shakespeare universe. Shakespeare, Borges said, was like the Old Testament "I Am":  a god who became whatever he would be, ever-changing, ever-remaking himself into new forms. Borges spoke of the "vast hospitality" of Shakespeare's mind, which harbored Iago, and Richard the Third, and Romeo and Juliet, and Cleopatra, and Prospero, and the Witches on the heath near Dunsinane. These characters are made of a special idiom, which Borges, quoting Robert Louis Stevenson, called "Shakespearese." Borges was fascinated with Shakespeare's ability to come up with transcendent verbal effects by continually combining the Latin and Germanic registers of English. Phrases and clauses like Macbeth's "multitudinous seas," Hamlet's "glimpses of the moon," and Romeo's "shake the yoke of inauspicious stars / From this world-wearied flesh" are not only poetry, said Borges. They are a new language.

As I said, I caught 95% of Borges' lecture. But one thing eluded me. Near the conclusion of his talk, Borges spoke of "a word" that "might be found" to "help us understand" Shakespeare. A magic Borges word! The key to Shakespeare! Was it the world-holding "aleph," or the mystical "Kaulakau," which, in one essay, Borges, citing the sage Basilides, called the "universal key to all the heavens"? I listened. And listened. And listened. But I was disappointed. Just after promising us this word, Borges stepped even farther back from the microphone, or knocked it with his hand, or threw a coat over it, and the next thirty seconds sounded like this: "mbmblmblmbl." Then the sound was restored to its prior imperfect quality, and I heard Borges saying, "Our final conclusion is this . . . . we know as little about Shakespeare as we know about God."

Ah, Borges and Shakespeare and Jaweh. You all had the last laugh.