For Shakespeare, Being Is Behaving 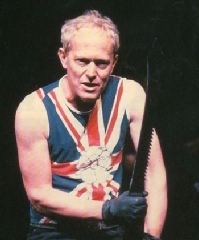 I'm getting tired of the truistic (my invented word) argument that Trump's golem-like behavior (sorry, that was an insult to golems) "taps into" some pre-existing anger and racism in the American psyche. "It has to be there first before it can be exploited," I hear, over and over, in various formulations. What does that mean? What has to be there first? The human capacity for evil? With this I agree, but it's no great discovery, or shouldn't be.* Evil isn't regional. The idea that there is some special pool of racism in the collective American heart, or in any heart, is dumb. There is naturally a human capacity to hate and fear other people who seem "different from us," and who seem likely to try to take something away from "us" (whoever "we" are). It's always been easy for some demagogue to get power by
appealing to people's fear and selfishness, since we are fearful and selfish by default. It doesn't take much -- a few trumpeted slogans and buzzwords -- to inflame our baser natures. Getting elected on that basis is not evidence of intelligence or talent. Why are people surprised that the world's demagogues (Hitler, Mussolini, Duterte) are crude and stupid? They have to be. They're satisfied by the easiest task: getting folks to hate each other. Trump is "good" at inspiring people to be at their worst: their most selfish, their most fearful, their most angry, their most egotistical, their most callous, their most deaf to the arguments of those they dislike -- because you don't have to be smart or talented to get people to act like that.

The general moral challenge is to be anything but crudely fearful and selfish, and the political moral challenge is to model and inspire higher values in the people. Doing this requires tapping into the human potential for generosity, high-mindedness, and love. That takes a lot more work, on both the part of the leader and of those led. It's frighteningly easy to slip backward. My point, if I may drive it into the ground, is that there's no wellspring of love or hate in people, because people aren't wells. Human beings are just that: be-ings. They are brought into existence by their behavior. A good American is an American who does good things. I think doing good things includes engaging in civil discourse, voting, abiding by laws, and working hard, but in any case it's doing something. A bad American is an American who behaves badly.

Why have so many supposedly educated people forgotten things the sages always knew? And by "sages," of course I mean Shakespeare.

Maybe Shakespeare became a playwright because he saw that acting was the essence of identity, or perhaps he learned that lesson while working in the playhouses. In any case, the idea gripped him, heart and soul, to the point that he wrote play after play in which men and women create themselves through deliberately choosing and enacting roles. This is true in both his tragedies and his comedies. Hamlet tells Gertrude, "Assume a virtue, if you have it not. / That monster custom . . . of habits devil, is angel yet in this, / That to the use of actions fair and good" he ("custom") imparts the tendency to perform those actions. (Believe me, that paraphrase was easier to understand than Hamlet's actual next line.) In the romantic comedy The Taming of the Shrew, Kate discovers that the way to become patient and generous is to behave patiently and generously (while adopting a sense of playfulness in doing so. It's performance). As Eleanor Roosevelt said, "The way to begin is to begin." Again and again in Shakespeare, characters remake themselves by choosing modes of performance, or action. Macbeth declines into a heartless automaton through repeated acts of ruthlessness, which he performs to secure his own power. Those rash and heartless actions don't reveal the automaton, they create the automaton. And repeatedly in Shakespeare, the worst, least honorable, and stupidest leaders find it the easiest thing in the world to whip a crowd into a selfish, bestial frenzy by suggesting to them that some group is trying to take away what is rightly theirs. Check out Henry VI, part 2 (a scene from which is pictured above left). I think you'll agree, Jack Cade is no John Kennedy.

That we currently have such a golem (again, sorry, golems) as president is horrible. (As Hamlet's father's ghost would say, it is "Horrible! O, horrible! Most horrible!," and in Macduff's more succinct phrase, it's a "Horror! Horror! Horror!") But can we not compound the outrage by ascribing to Trump some kind of evil genius of timing? Can we not suggest that he knew just how and when to tap into a tide of racism and fear in America? What time is good to do that? Any time, in America or anywhere else! And let's stop paying ourselves the unrealistic compliment of suggesting Americans are capable of eradicating their racist/sexist/homophobic/whateverotherist tendencies, nor the unjustified insult of believing we are worse -- more racist, more angry, more fearful -- than people of other nations. We're human, like everyone else. Fortunately, that means we have noble tendencies as well as ignoble ones. Shakespeare knew people could always do better. If we practice for two years, in 2020, we can, too.

Posted by Grace Tiffany at 6:25 AM