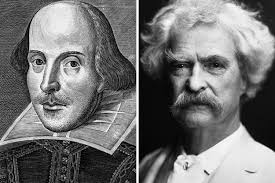 The Prince and the Pauper is a work of social criticism set in mid-sixteenth-century England. Superficially, the plot is that of a fairytale. A prince (in this case young Edward, son of Henry VIII) and a London pauper, of inexplicably identical appearance, meet by chance, spend a morning together, and at one point exchange clothes, after which circumstances drive them apart. Since no one will then believe their claims that they are not who they're dressed as, the pauper spends some months living as a prince -- and, soon, a king -- while the prince endures the hardships of poverty. Eventually the true young king's public revelation of a secret only he would know, and the pauper's weariness of royal life, ensure that order is restored. In relying on comic accidents and feigned and mistaken identities, Twain was imitating the tricks of Shakespearean comedy. But the book isn't comic. Twain
simply uses the recognizably comic devices to explore, with occasional humor but consistent anger, the injustice of laws that punish women, the poor, and religious dissenters, while favoring men blessed with hereditary wealth. In its trenchant satire, The Prince and the Pauper is far more like Huckleberry Finn and A Connecticut Yankee in King Arthur's Court than it is like Tom Sawyer. It's also less like Twelfth Night than it is like another work of social criticism that begins as a fairytale: King Lear.

I'm not the first to notice that Twain patterned young King Edward VI's brutal education on unkinged Lear's stormy journey. Fifty-five years ago the scholar Robert Gale wrote of Twain's book's indebtedness to Shakespeare's tragedy, and also of Twain's careful, deliberate efforts to render his book "historically and linguistically accurate" by reading not only Shakespeare and other Elizabethan and Jacobean playwrights but David Hume's History of England and Richard Head and Francis Kirkman's The English Rogue. Of all these informing works, King Lear was the most central to The Prince and the Pauper's plot. In Twain's tale the unfortunate royal Edward falls in with a group of English outcasts, some of whom are willful criminals and some of whom are displaced victims of noblemen's mercenary enclosures, for private gain, of what was once public land. He's also befriended by a fallen earl (of Kent, no less) who, while fighting the king's wars, has been swindled out of his estate by a nasty brother (merging Lear's disguised-earl plot with that of Edgar and his treacherous brother Edmund). As Edward traverses the English countryside, accompanied by rogues who think he's insane, he encounters an English farmer's wife who shows him kindness and generosity despite her straitened circumstances, and an unhinged Catholic monk who, madly believing Edward's crazy (though true) claim that he's the new king, attempts to sacrifice the young royal in revenge for his father's appropriation of monastic lands. Finally he falls into the hands of a cold country judge who jails him and his companion earl for vagrancy, orders severe whippings of citizens for trifling offenses, and, as suggested above, burns two young Baptist women at the stake. Among the prisoners in the English jail the young king also meets "an old lawyer" who "had written a pamphlet against the Lord Chancellor, accusing him of injustice, and had been punished for it by the loss of his ears in the pillory and degradation from the bar, and in addition had been fined three thousand pounds and sentenced to imprisonment for life." The lawyer shows the king "the mutilated scars of what had once been his ears," declaring them badges of honor. Like Lear's encounters with the miserable, these experiences inspire Edward to a vision of compassionate governance. "The world is made wrong," he declares. "[K]ings should go to school to their own laws at times, and so learn mercy." Here Twain was clearly inspired by Lear's epiphanic declaration to the powerful, and especially to himself: "Expose thyself to feel what wretches feel, that thou mayst shake the superflux to them, and show the heavens more just!" Like Lear, the young monarch is forced to acknowledge the evil of laws whose punishment falls disproportionately on those without land and power. Twain adds a particular criticism for oppressors of those who dare to criticize institutionalized injustice.


Mark Twain's deserved reputation as a humorist tends to obscure the fact that he was a magnificent prose stylist. The Prince and the Pauper reveals the beauty of his writing, and justifies its invocation of Shakespearean tragedy. In a scene that evokes one in Lear's second act, the young (true) king sees his friend, the disguised earl, set "in the degrading stocks, the sport and butt of a dirty mob -- he, the body servant of the king of England!" In the jail "men . . . came, by day, to gaze at the 'impostor' [earl] and repudiate and insult him; and by night the carousing and brawling went on, with symmetrical regularity." The novel also shows Twain's commitment to rendering a fair facsimile of the language of the period, which underlies his powerful descriptions and eloquent dialogue. Back in the palace, the pauper-made-king muses to his puzzled servant, "'Tis strange how my memory doth wanton with me these days . . . . But mind it not -- I mend apace -- a little clue doth often serve to bring me back again the things and names which had escaped me. (And not they only, forsooth, but e'en such as I ne'er heard before -- as this lad shall see.) Give thy business speech."

When, in the end, the impostor-royal is happily restored to the London streets, and the true king to his throne, the king, like Lear, has been not only chastened but permanently transformed by his immersion in the gritty lives of his kingdom's less fortunate citizens. Also like Lear, Edward doesn't long survive his educational experiences, though he lives long enough to put certain reforms into practice. In presenting Edward VI as a kind and just monarch, Twain was guilty of some wishful thinking, or perhaps influenced (despite his agnosticism) by the Yankee Protestantism of his culture. Twain was no fan of smug Baptists and Presbyterians, but the association his book makes between Catholicism and superstitious irrationality was as common to late-nineteenth-century Protestant Americans as it was to sixteenth-century English Reformers, and this is doubtless why Twain overlooks Edward's government's harsh repression of Catholics during his short reign. Still, Edward VI looks good next to his father, Henry VIII, and his successor, Mary Tudor ("Bloody Mary"), so Twain may be justified in concluding that "The reign of Edward VI was a singularly merciful one for those harsh times."

As fanciful, fun, and fairytale-ish as its overarching plot seems, The Prince and the Pauper belongs in that category of Twain's writings which demonstrate his outrage at all forms of social cruelty: enforced servitude, religious and philosophical intolerance, the ravages of imperialistic wars (for it is these which reduce his hero-earl to poverty), and the subjugation of women. (Twain's final chapter notes that though the earl's duplicitous brother has terrorized his wife into a kind of slavery, the law prevents her from testifying against him in court.) All these issues interested Shakespeare, and he built whole plays around some of them. No wonder Twain turned to him for guidance and inspiration when he conceived of The Prince and the Pauper.
Posted by Grace Tiffany at 4:38 AM