Words and Phrases I Hate That Shakespeare Would Have Too 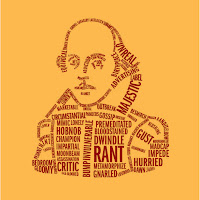 It's time for me to list more words and phrases that people should stop using because I don't like them. I will explain what is wrong with them, and why Shakespeare would also not have liked them.

How would Shakespeare say it? Well, here's how Polonius praises the traveling players in Hamlet: "The best actors in the world, either for tragedy, comedy, history, pastoral, postoral-comical . . . these are the only men." Of course they aren't the only men for those things, but "only" is understood to mean "best." For irreverent humor, Sacha Baron Cohen is the only man.

2. Saying there's an uptick in something. "There's been an uptick in crime." What the hell is an uptick? The people who use this word don't know. It sounds like an insect. They are just parroting an opaque, trendy noun. Bad, bad. Your freshman writing teacher told you to avoid cliches. Do it. Use a fresher word. Proposed Shakespearean substitute: "We have seen the best of our time. Machinations, hollowness, treachery, and all ruinous disorders follow us disquietly to our graves."

3.Saying someone should dial back something. "Can you dial back that outrage a tad?" First, no, I can't, and second, nobody knows what a dial is anymore. I don't think my teenage son would recognize the purpose of one or know how to use it. A sentence that used the word "reboot" might work. But here's what Shakespeare says: "Check thy hideous rashness."


4. Calling something "iconic" that isn't a picture. This one is misused all over the place. "'Diversity' is the iconic phrase of the left." Nope. Words can't be iconic, because icons are images. You don't read icons, you look at them. You could say "The Confederate flag is the icon of the Alt Right," or you could at least argue it with some plausibility. Shakespeare would shudder at the misuse of "icon." He knew that visual images carried powerful symbolisms that were different from those generated by words. This is what Hamlet is talking about when he tells actors to "suit the action to the word" so as to show "scorn her own image." Shakespeare did not use the word "icon," but he knew how to use a sacred image (icons are actually images of saints). That's why he had King Henry V kneel and pray and ask to be delivered before the Battle of Agincourt. Henry V wasn't Christ, but he could be made visually to resemble him.

5. Saying you are doing some aspect of lunch. People in restaurants should no longer use any form of the verb "do" in relation to the food they are ordering, as in, "I think I'll do the wilted arugula salad with dessicated goat cheese." I can't overstress how perverse that sounds. Don't people know what "do" means? And it meant the same thing to Shakespeare. It's one of those words that always means something ribald, even in an age when people no longer use the word "ribald." One of the Witches in Macbeth says, "I'll do, I'll do, and I'll do!," making naughty and slutty gestures to show what she means. And a woman in Measure for Measure who has been married nine times is named "Mistress Overdone." Need I say more? Stop making people listening to your disturbing claims that you will "do the bacon cheeseburger."

6. Asking restaurant patrons if they are "still working on" their meals. People eat their meals, or they don't eat them. Sometimes they toy with their food. If rude, they may fling it about. But the ones who "work on" the food are the chefs in the kitchen, so this question should be reserved for them. Here are some Shakespearean alternatives.  "What! Hast thou dined?" (The Taming of the Shrew). "Wil't please you taste of what is here?" (The Tempest).  "'Twill fill your stomachs, please you eat of it" (Titus Andronicus).

7. Saying "I'm not comfortable with [whatever]" as a way of declining to do something. "I'm not comfortable doing that." Were you asked if you were comfortable? Most likely not, so you are answering a different question than the one you were asked. Why can't you say what you mean? "I think that's an illogical solution," or "I'm too lazy to do that," or "I'm too selfish to do that," or, "That sounds really scary," or, "I don't understand anything you just said," or even, "Nope. Don't feel like it." "I'm not comfortable" is really interesting, because it proceeds from the unexamined premise that the speaker is supposed to feel comfortable, and be made to feel comfortable. This is an understandable goal on the part of the person who says "I'm not comfortable with that," but it's illogical to assume that it would be the goal of the person to whom he or she is saying it. This is what King Lear discovers. The gods don't care whether he's comfortable. Once he figures this out, he stops asking to be made comfortable and says, "Let fall your horrible pleasure!," meaning, "Do your worst!" So "Let fall your horrible pleasure!" is the Shakespearean substitute for "I don't feel comfortable with that."

8. Saying, "Oh, no, you're fine" when someone says "I'm sorry." Again, this is a response to a question that wasn't posed or a comment that wasn't made. "I'm sorry" does not mean "Am I okay? Please, tell me whether I'm fine." It means, "I'm sorry." Appropriate responses would be, "No problem," or "That's okay," or even this really old-fashioned one: "I forgive you." That last one is the closest to being Shakespearean. I will here quote one of my favorite instances of  "I forgive you" in Shakespeare, which is Prospero forgiving his wicked brother Antonio near the close of The Tempest. He says, "I do forgive thy rankest fault." This statement would really make a sorry person feel okay.

9. Referring to the first decade of the twenty-first century as "the aughts" or, worse, "the oughts." Somehow, I feel like I've complained about this before, but I'm not sure where, and journalists didn't stop doing it, so I'm complaining again. "Oughts" are things you should do. "Aughts" is the plural of "aught," which means "anything." So when you call the first decade of the twenty-first century the "oughts" you are suggesting that we should have done something during them that we didn't do, which is very, very true, but make sure that's what you mean. And when you call that same decade the "aughts," you are calling it "the anythings." I think what people mean to do is call this decade the "naughts." "Naught" means "nothing," and is an appropriate way to refer to a decade whose years (after the century designation) begin with zero. You can read King Lear and learn about this as well as about everything else you would ever need to know. The word "nothing" is an important word in that play, and when Lear's mean daughters are called "naught," they are being called nothings. As for "aught," we can consult Hamlet again, who, when Ophelia gives him back his love letters, says, "I never gave you aught." He is lying, but he knows that "aught" means "any."

10. "I can help who's next." In fact, so this post is not entirely negative, I am ending on a positive note. It's okay to say "I can help who's next"! It's okay because it's Shakespearean, and "Shakespearean" is synonymous with "okay." During Elizabethan times, "who" was a synonym for "whoever," as we see, again, in Hamlet, when he says, "Who calls me villain . . . . I should take it." Editors and readers get puzzled by the lack of a question mark after "villain," and sometimes, mistakenly, they stick one in there. But Hamlet isn't asking, "Who calls me a villain?" He's saying, "Whoever calls me a villain, I should take it, because I am one." Read it and see if you agree. (It's the last speech in act 2.) So, in any case, I like to hear people saying, "I can help who's next," because they sound like Hamlet, who, despite his serious flaws, is extremely articulate, as we should all strive to be.