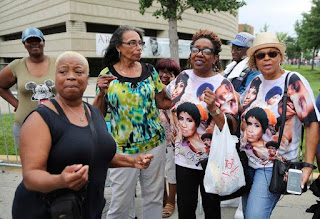 That's not to say there weren't plenty of men there. There were just so many more women! This made sense to me, listening to the songs cranked out by a local radio station broadcasting from the site, enlivening the crowd, who were mostly singing
and dancing, like I said. As I passed by one side of the museum, the station played "Who's Zoomin' Who," a song celebrating female aggressiveness. As we rounded the corner, the station switched to the slower tune, "Until You Come Back to Me," which is not about a woman sitting around waiting for a man to come back to her, but about a woman who goes over to his house and harasses him so he'll come to his senses. "I'm gonna tap on your door . . . rap on your window-pane . . . ." Women can be stalkers, too!, this song says. Finally, as I approached the museum's entrance I heard the beginning of Aretha's greatest hit, "Respect," which brazenly sets out the unconditional terms for a relationship, and further proclaims that it's the man's job to find out what respect means to a woman if he doesn't know already. I understand -- and respect -- the comment a man in line made, to the effect that the "Respect" lyrics were a demand for respect for her race, by a singer who had lived through the era of segregation. No doubt he's right. But -- like "Think," Aretha's warning to a guy that he's risking losing her -- it's also a woman's anthem.

I can't help but think it's Emilia, the servant and worldly friend of innocent Desdemona, in Othello, a play which deals centrally with marriage relationships. Emilia is saddled with the worst husband in Shakespeare. Iago publicly belittles her, lies to her, and exploits her friendship with Desdemona to get what he needs to destroy Othello's happiness. Emilia's great speech comes near the end of the fourth act, after we've witnessed Iago's bad treatment of her and are thus prepared to appreciate her general comments on the condition of women in a man's world. She says that if husbands "break out into peevish jealousies, throwing restraint upon us" or "strike us," well, wives "have . . . some revenge." She concludes, "Let husbands know that wives have sense like them." At the close of the play, even though she dies for it, Emilia frees herself from Iago. He tells her to shut up and go home, and she refuses. Instead, she turns heroic. She provides the evidence that convicts Iago of his murderous duping of Othello.

Emilia's stuck in a tragedy, of course, and also in the early seventeenth century. Aretha wasn't. Her life had hard moments, but in the end it was more like a comedy, in the classic sense that with her, more things came right then went wrong. Unlike Emilia, Aretha was able to share her inspirational and righteous demands for respect in a way that worked, in the most melodious mode imaginable, and to inspire whole generations of women thereby. In the line in Detroit I saw women in their twenties, women holding little girls by their hands, middle-aged women, and old women with walkers. The whole line was moving to the music. I thought how lucky I was to have first heard "Respect" in grade school. I was in high school for "Until You Come Back To Me," and in graduate school for "Who's Zoomin' Who." I grew up with Aretha Franklin in my consciousness as an emblem and example of strong, sassy womanhood. I never felt inferior because I was female. What? How ludicrous! I thought girls were the coolest. Aretha Franklin had something to do with that.

Inside the museum, the line moved briskly. I was handed a card that said that in 1985, Aretha's voice was declared a "natural resource of the state" by the Department of Natural Resources of the State of Michigan. Why not? Sleeping Bear Dunes, Grand Traverse Bay, and Aretha. I passed by the gold plated casket, wherein lay the former Aretha, looking happy, decked out in a scarlet dress and high heels. She was a facsimile of herself, an excellent mockery, which is all even the best embalmer's art can accomplish. The real Aretha was out in the open, singing and dancing in line. That's what I'd come to be part of, so I went back outside.

Posted by Grace Tiffany at 5:42 AM