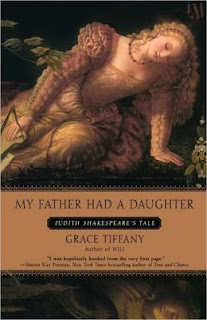 I know, you want dates. Here they are. Judith Shakespeare's life spanned the years from 1585 through 1662. At the age of 77, when she took her last breath, she'd lived through the second half of the reign of Queen Elizabeth I, the entire reign of James I, the full tragic reign of his son Charles I, the Interregnum, and the first two years of the reign of Charles II. She was born two
years before Mary Queen of Scots was beheaded for treason. During her girlhood England defeated the Spanish Armada and Sir Walter Raleigh traveled to Virginia. In her young womanhood the Gunpowder Plotters were executed, Jamestown was founded, and the Pilgrims landed at Plymouth Rock. In her late middle age the English Civil War was fought, Charles I was beheaded, and Oliver Cromwell became Lord Protector. When she died, Charles II was on the throne, Cavaliers were spitting on Cromwell's grave, and women were performing comedies of manners on the London stage. The only life span I know of that comes close to matching Judith's in novelistic interest potential was that of George Bernard Shaw, who also had, to say the least, notable connections to the world of theater. Shaw lived from 1856 to 1950. That means he (a precocious seven-year-old) read real-time accounts of the Battle of Gettysburg in British newspapers, and died five years after atomic bombs were dropped on Nagasaki and Hiroshima. Now, that's dramatic.

Maybe someday I'll write a novel about George Bernard Shaw. But at the moment, it's Judith Shakespeare who commands my pen. (Or keyboard.) My first book followed her only up to the time of her marriage and first pregnancy. The second revisits her in the year 1646, when England was in the final throes of the battle between its king and its parliament known as the English Civil War. What might the daughter of Shakespeare have seen, in this battle-plagued time, when brother fought brother? What audacious behaviors might she have performed? How might her memory of her father, and of his deep investment in English politics and history, have colored her thoughts about the violence that raged around her? Did she ask herself whether Shakespeare would have proved Royalist or Parliamentarian? And which side, in the end, did she choose?

"Lord, we know what we are, but know not what we may be." This line from Hamlet serves as epigraph for the novel. It's spoken by mad Ophelia, before her drowning (obviously). In my first Judith novel, a tragic drowning during her childhood radically alters the course of her life, and involves her in the Elizabethan theater world against the will (second pun) of her father. Now Daddy's dead and Parliament's Puritans have torn down all the playhouses. But there's still a sphere of action for a woman as wild as Judith. It's called the theater of war.

If you like Shakespeare, or historical fiction, or seventeenth-century female surgeons, or good stories, or any of the above, stay tuned for Judith's Part Two.