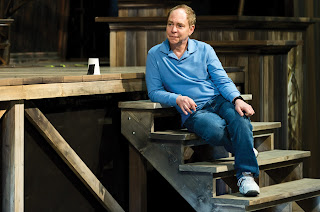 Anyway. The purpose of this post is to provide a short review of the recent production of Macbeth by the Chicago Shakespeare Theater, which performed the play in their smaller space, known as the Yard. CST's productions are generally excellent, but this production had the added draw of being co-directed by Teller, one-half of the magician duo Penn and Teller. (The other co-director was Aaron Posner.) Having
seen two years ago a truly wonderful Posner-Teller production of The Tempest, in which cool stage-magic was everywhere (even off stage, among the audience), some friends and I were excited to see what magical tricks would be wrought by Teller with Macbeth.

Well . . . . we were disappointed. Not that this wasn't a perfectly adequate production of the play. But we wanted more than adequate. We wanted something radically new. Yet, as it turned out, Posner's and Teller's biggest departure from convention may have been their casting a man as Macbeth. (Yes, I'll be glad when the current fad of reverse-gender casting for Shakespeare tragic leads runs its course.) My friends and I saw illusions, but we did not experience the degree of magical illusionism we had come for. Perhaps because Teller is relatively new to Shakespeare, he doesn't seem to have understood that every production of Macbeth fabricates illusions for the audience, because central scenes are devoted to them. Every director has to figure out how to make the Witches vanish, and how to have Banquo's Ghost appear suddenly, so that even though we know he's coming, we are startled like Macbeth when we see him. Every director has to concoct four marvelous visions for Macbeth when he visits the Witches' cavern in act four, and I don't think I've ever seen a production of the play that didn't provide a real magical dagger to point Macbeth towards the place he was going anyway -- namely, the king's chamber, there to assassinate the hapless monarch. The Tempest includes fanciful monsters and airy spirits, but Macbeth is full of horrible illusions. So Posner and Teller would have had to come up with something really spectacular to make their production stand out.

That they didn't -- that their illusions were only average -- suggests that they didn't really consider the performance history of the play. Some of Teller's comments in a recent interview indicate as much. As an example of how their Chicago production would go "a little bit beyond" what was usual, Teller said, "If Macbeth sees a dagger, we [the audience] see a dagger . . . That way, the audience has to go through the experience that the Macbeths go through." Okay, but, like I said, we always see a dagger. And an armed head emerging from a cauldron. And Witches vanishing (somehow) into air. And Birnam Wood on the move. So it's a high bar.

As I also said, the directors didn't meet it, or at least didn't top it. Here's what they did do. Macbeth saw the "air-drawn dagger" in a large mirror placed at center stage, then somehow reached into it and grabbed the dagger. That was good, except for the fact that in the script, he never touches the air-drawn dagger, and in fact is at the moment he sees and follows it grasping his own, which he ends up using. That distinction is important. During the Banquo's Ghost scene, actors crowded together to allow the Ghost to emerge from some furniture behind them, then parted to reveal the Ghost -- which was funny when, the second or third time they did it, there was no Ghost there and he had appeared at another spot at which the audience wasn't looking. And how he did that, I couldn't tell. That was good magician work. But the most spectacular scene was a let-down. A cool creepy head floated up from the Witches' cauldron and spoke ("Beware the Thane of Fife!"), but it wasn't an armed head, and then the Second Apparition, which was supposed to be a bloody child, appeared simply to be the same creepy head. The crowned child rose next, and I give him full marks. He was a boy to whose hands branches and twigs had been affixed so his arms really looked like tree branches. But the Fourth Apparition wasn't there! Let me say that again: The Fourth Apparition wasn't there! The parade of eight kings holding a mirror DID NOT APPEAR! We were flabbergasted.

In short, the Posner-Teller team decided to substitute some script emendation for the wild illusionism they should have known their audience was expecting. The problem is, they hadn't studied Shakespeare or the play deeply enough to pull this off. Their version of the play began with a wordless scene in which Lady Macbeth mourned over a dead child (a cliche, based on the contradictory evidence the script affords about whether they've had children, and furthermore a cliche which disturbingly suggests a link between maternal bereavement and murderous vengefulness. In other words, "Since our child died, let's kill people." Do we really want to suggest this connection?) In the scene wherein Macbeth hires the Two Murderers, the second part of his catalogue-of-dogs-and-men speech, when he twistedly explains that to be one of the highest in the catalogue one must be willing to commit murder -- that part was cut. So was the Third Murderer. I'll say that again: SO WAS THE THIRD MURDERER. Think about all the fun directors have had over the years sending a Witch, or Ross, or Lady Macbeth, or even Macbeth himself on stage as this mysterious Third Murderer, who isn't seen in the earlier scene and claims to have been sent by Macbeth. But Penn and Posner simply noticed that Macbeth had only hired two men, and axed the third. Arrgghhh!

What else? Oh -- the unkindest cut of all (to audiences, as well as to Macbeth) came at the end, when, after declaring in his grimly humorous way that he'd not play the Roman fool and die on his own sword because "whilst I see lives, the gashes do better on them," Macbeth ran straight onto Macduff's sword. I have no further comment on this.

My mom used to say that if I couldn't say anything nice I shouldn't say anything at all. Those who know me know I hardly ever follow that advice, but I hate to be completely critical, so I'll conclude this review with some compliments about this resoundingly average production. First of all, as I said, it was at least adequate. Not up to the Chicago Shakespeare Theater's usual excellent standard, but basically good, despite the weird omissions and changes, because the acting was competent. I was particularly impressed with the attention given by directors and actor to Macbeth's humor. Teller directed actor Timothy Stickney to make the most out of lines like this one, delivered by Macbeth on the morning after the bloody regicide, in response to a visiting thane's eloquent and lengthy account of the horrible and portentous stormy night he has just experienced: "'Twas a rough night." That's Macbeth at his laconic best. Rarely is Macbeth's dry, understated humor sufficiently emphasized, and Stickney made sure it was noticed at that moment and others. His best moments came near the end, when, his castle surrounded, Macbeth's mounting despair spurs him to flights of humorous taunting of his servants. I have never seen a funnier rendition of the scene wherein he calls a messenger a "cream-faced loon" (one of my favorite insults since I encountered it in my tenth-grade English class).

And there was more to praise. The Witches, hanging around at stage-edge throughout the production, were appropriately ghoulish, and the men's kilts were nice (although it was strange when they morphed into evening gowns in act two) .Chaon Cross did a perfectly adequate job as Lady Macbeth, and grew a little more than adequate during her last, mad speech. Her "Then 'tis time to do it," said with sudden resolve, seemed to mean not "Time to kill Duncan," but "Time to end my life." Which she then does. And finally, while some audience members must have hated the drunken Porter, whose speech was updated and turned into knock-knock jokes which he delivered at the expense of certain audience members, I thought it worked. The Porter's comic speech always seems bizarrely unassimilated into the rest of the tragedy, and it's also the only part of the play where the audience is directly addressed, so why not play it to the hilt? Plus, some of this actor's jokes (unlike those of Shakespeare's Porter) were actually funny. Like: "Knock-knock." "Who's there?" "Interrupting Hell-Hound." "Interrupting Hell-" "YAAAAHHHHHH!!!!" Get it?

Final verdict: not a very magical Macbeth. But yes, a Macbeth.
Posted by Grace Tiffany at 6:45 AM