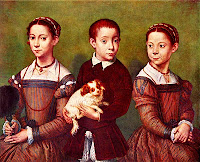 Shakespeare and his Elizabethan contemporaries might have been puzzled by modern parents' sadness and trepidation when kids fly the coop heading for college, the Alaskan wilderness, or a six-person roach-infested-apartment share
downtown. In fact, Elizabethan families of varying levels of wealth kicked kids out of the nest a lot earlier than we do. Children as young as ten went to work as servants in other households, while youths of twelve or less left home to train as live-in apprentices at the homes of craftsmen or tradesmen.  Though of course many grown children stayed to help care for parents and to work on family farms or in family businesses, for most households, space was such a problem that the same families were always trying to shove people out. Shakespeare's own family (who were glovemakers) bought and annexed the house next to theirs so they could push people into it. As for university, if you were lucky enough to attend (Shakespeare wasn't), the age at which you entered was more likely to be 16 than 18. And for the vast majority of the population -- that is, those who earned money by labor, not through inheritance -- the kids were ultimately expected to take care of their feeble old parents. So parents were understandably eager for their young to get out there and earn.

Now that I've written that last sentence, I'm thinking the Elizabethans weren't fundamentally all that different from us, after all. So perhaps we twenty-first-century parents are well suited to digest FIVE THINGS SHAKESPEARE HAS TO SAY ABOUT EMPTY NESTS.

1. Grief and nostalgia are normal parental reactions to a child's leaving home. One of the most poignant expressions of sadness in all of Shakespeare is Constance's speech in King John about the loss of her son, who's been taken to England while she's had to remain in France. She says, "Grief fills the room up of my absent child, / Lies in his bed, walks up and down with me." A mother viewing her grown son's vacated childhood bedroom, remembering him as a laughing child of three, or five, or seven, or ten -- she knows what Constance means.

2. On the other hand, you can rent that space out for cash. My parents actually did this with my bedroom when I was a junior in college. No Gertrude and Claudius they, they welcomed my return to university. Maybe Shakespeare gave them the idea, with all his parents who cackle with glee when they get their daughters out of the house. Shakespeare's dads are so practical and money-minded that they're glad to barter off their female offspring to the highest bidders. "I must confess, your offer is the best," says Bianca's father to the favored suitor in The Taming of the Shrew. While wily daughters often thwart their dads' choices, there is never a fortunate marriage in Shakespeare that's not lucrative for the families. Of course, most of our daughters have many more options than marriage and motherhood as career choices. Shakespeare, however, reminds us that whatever life their sons and daughters pursue, parents are not unreasonable to expect some kick-back for their efforts.

3. And don't be too free with the checkbook. Look what that wild Lucentio does in, again, The Taming of the Shrew when he heads off to the University of Padua with not one but two servants, and commences a life chasing women (well, one woman) and engaging in  various hijinks. His servant tells him only to study "mathematics and . . . the metaphysics" when he feels like it, and he never feels like it, so he doesn't study. He just spends his dad's money. When Dad shows up for a visit he laments that "my son and my servant spend all at the university." Why does that complaint get the biggest laugh of the play from audiences? You know why. So what's the moral? Insist that your kid pass his classes, or cut purse-strings. Lucentio does make good in the end (by marrying a rich woman, which is one way to do it).

4. Still, don't too closely scrutinize or harshly judge your child's choices. Remember your child isn't you. He or she is not some contemporary version of what you were at that age. You'll save yourself so much pain. Expecting him or her to do what you did, to want what you wanted, is a way of blinding yourself to your "grown and flown" child's personal strengths and successes. Discipline yourself to have some faith, patience, imagination, and trust. The most famous example of the father who lacks such trust is Shakespeare's King Henry IV, who can't perceive his own son's original brilliance because he never acted like Prince Hal when he was young. He sees only a dissolute, undisciplined kid who is wasting his opportunities, and tells him, "The hope and expectation of thy time is ruined." Sadly for Henry IV, he dies before he can see how wrong he was about Hal, who becomes -- partly because of his unorthodox self-training -- one of the greatest royal military leaders in England's history.

5. Also, don't compare your kid to your friends' kids. This odious "I wish my (son or daughter) were like (fill in blank)" habit comes from our sense that other people are looking at our kids and judging them comparatively -- seeing them as not the one who got into University of Michigan Law School, or won the scholarship, or graduated as valedictorian. This is highly unlikely, even if such worldly accomplishments were the most important things in life, which they're not. Still, many of us adopt this weird imaginary-third-party-audience point of view, which is hard on ourselves and our kids. We're like wicked Dionyza in Shakespeare's Pericles, who hates her daughter's friend Marina because Marina seems to do everything right and "gets all praises" -- even though her own daughter has no problem with Marina. Dionyza ends up plotting murder. Don't go there! Spectacular though Dionyza is, my best negative example in this category is, once more, King Henry IV, maybe because I understand him so well. He tortures himself by constantly comparing his wayward son not only to his own exalted younger self, but to Hal's accomplished young rival, Hotspur, who earns universal praise on the battlefield. Henry IV even wishes he could learn that some "fairy" had "exchang'd / In cradle-clothes our children" -- i.e., that Hotspur, not Hal, was his real son. Ouch! That line gets a rueful laugh in theaters, too. But it's sad. The king sacrifices so much love for his son to this pointless wish that the kid were other than he is. And King Henry turns out to be wrong. As noted above, Hal blossoms gloriously, in time, in a way that exceeds Hotspur's qualities. So the Shakespearean bottom line is: don't compare. Instead, watch what's there. The shape your child's life takes is likely to surpass your imaginings. Let it.
Posted by Grace Tiffany at 6:27 AM