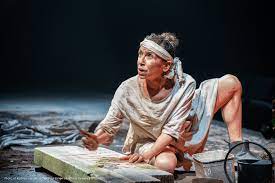 Yesterday I heard part of a discussion on NPR, concerning the current reopening of theaters as well as other ticketed events in the wake of Covid. (I wish we were in the wake of Covid; I'm speaking hopefully.) Although most of this discussion was related to the ways people are being ripped off by scalpers, the program host began by posing a different question to the radio audience: what was the last live performance you saw before Covid shut us all down?

It's interesting how easy it is to answer a question like that. It's like -- on a more or at least differently tragic scale -- the question of where you were when you heard President Kennedy had been shot. If you were five or over, you remember. (I was five, and I remember.) You remember what you were doing before a completely unexpected thing descended and instantaneously changed your world in a way you did not like. Quite likely you were doing something you enjoyed, but that kind of enjoyment was going to depart for a while. (Yes, in November 1963, this was true even for kindergartners, because we lived in families which contained adults who understood things better than we did.) But this is too grim! I didn't mean to go there. I just want to say that I do remember the last live performance I saw before Covid hit, as do the people with whom I attended it, and we all looked back on it with a kind of appreciation that we had taken the trouble to go to it, since we weren't going to be able to see anything else like it for a very long time. Of course, this being a Shakespeare-ish blog, it will not surprise readers to know that the performance was a production of a Shakespeare play.

The work was Timon of Athens, a weird and melancholy play caught somewhere between the genres of tragedy and satire, like several others Shakespeare wrote in the first decade of the seventeenth century (e.g., Troilus and Cressida). It was directed by Simon Godwin of the Shakespeare Theatre of Washington, D.C., where I grew up (in the D.C. area, not inside the theater) and which I was visiting. Despite this theater's annoying habit of spelling "theater" with its "e" on the end as though we weren't Americans (Chicago Shakespeare Theater doesn't do that, by the way), I have never seen a play performed by the group that wasn't made spectacular by their acting. As a teenager whose mom held season tickets, I was lucky enough to see, not once but many times, luminaries such as the magnificent comic actor Floyd King (an unforgettable Don Armado), Franchelle Dorn (hilarious as Mistress Page in Merry Wives), and Edward Gero (in so many roles, but most recently as the tortured ailing monarch Henry IV in the second part of that play).

But this time, in March of 2020 -- truly right before it all shut down -- my friends and I were watching, in the lead role of this lesser-known Shakespeare play, a British import, Kathryn Hunter of the Royal Shakespeare Company. She was the main reason I'd wanted to go. Ever since I saw, on film, her extraordinary rendition of Puck in Julie Taymor's 2014 version of A Midsummer Night's Dream at the Theatre for a New Audience (oh, that final "e"), I had wished to see her again, in something! As Puck, the diminutive Hunter, though already in her 60s, exhibited flexibility and gymnastic skills worthy of an Olympic gymnast. She performed in a Charlie Chaplinish "Little Tramp" type outfit, and her voice, strange and gravelly, added to her boyish androgyny, as she crouched like a frog and scuttled like a crab across the stage, or allowed herself to be lowered head down from the rafters by means of her expanding elastic pants. (That Julie Taymor!) Still, I wouldn't have guessed the next Shakespeare role I'd see her in would also be a male one. Yet so it was.

Puck, like The Tempest's Ariel, is often played by women. As spirits, both seem somehow genderless. Timon, the savage, misogynistic, and very human hero of Timon of Athens, is different, which, I assume, is why Simon Godwin (if it was he; Hunter first starred as Timon with the RSC) simply made the character female -- a wealthy lady of ancient Athens, rather than a lord, however historically unrealistic that choice may have been. (It certainly isn't the only historically weird thing about the play, as is usual in Shakespeare. For example, Timon, an Athenian who lives centuries before Christ, spouts some terminology proper to the Christian religion, in references to church "canons" and "cherubim.") In general I'm a traditionalist who is skeptical about the contemporary craze for women playing male Shakespeare roles, but in particular cases I usually forget such distinctions immediately when the acting is good, and . . . this was Kathryn Hunter. Spectacularly, she rode the roller coaster from the first three acts of the play, where the spendthrift Timon feasts his friends on credit, to the final two acts, wherein Timon, after being rebuffed when he visits those same friends to beg loans, retires to the wilderness as a misanthrope, to curse thankless mankind. Hunter was clad in a gold gown and headdress for the first three acts, serving her friends in a gold-draped dining room on plates and platters of gold, which, when confronted with the evidence of their ingratitude, she throws at them (in one of my favorite scenes in Shakespeare). This tiny Timon went berserk! And her throwing arm was magnificent. But in the final acts, crouching half-wild in rags to deliver her great maledictions against mankind, Hunter outdid herself, preaching a savage indictment of money and those who lie, cheat, steal, and kill to possess it. "Gold" is a "yellow slave" that will "knit and break religions," "place thieves and give them title"; it's "the common whore of mankind." Delivering these lines, Hunter, mud-besmirched and crouching, simian-like, close to the earth, seemed a demonic version of the Puck she'd once played -- or perhaps a harbinger of Caliban, whom I'd love to see her enact one day.

For its excellence, her performance would have burned itself into my brain no matter when I'd seen it. But there was something particularly memorable about the timing, with the play opening in Washington a few weeks before the coming of Covid, which of course cut the run short, and in the year of the U.S. presidential election, which so bitterly divided and continues to divide our nation. "The middle of humanity thou never knewest, but the extremity of both ends," Timon is told. In his person, he demonstrates the failure to find Aristotle's moderate mean of human behavior, choosing extravagance and then misanthropy, never achieving simple generosity. In the midst of our extremism and identity politics, in our world of victims and perpetrators, it was worthwhile to go into the sad season with a memory of this representation of human folly. Shakespeare's deluded protagonist first thinks everyone is noble, and then, when he gets disappointed, concludes people are all monsters. He never finds the middle, the place Jesse Jackson used to call "common ground." Humor, humility, acceptance of human imperfection, and the ability to listen -- Timon has none of it, though his play contains no lack of characters to point out what's missing. In the early months of 2020, I'm glad I was there to hear it.

Posted by Grace Tiffany at 1:04 PM