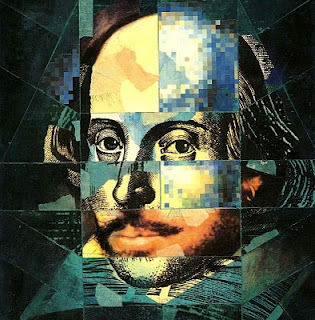 Going to a really well performed Shakespeare play provides its own answer to the "why" question. As a playgoer, you don't have to have read any Shakespeare before, to be struck by the beauty and insightfulness of Shakespeare's dialogue. You may not understand all of it. But you'll understand a lot of it, and the part you understand will be unlike anything you've heard before. Shakespeare takes on all subjects, all fundamental human experiences, sees them from the inside out, and articulates them with bone-chilling precision. What is that worth? If a central purpose of literature -- including dramatic dialogue -- is to hold a mirror up to human nature, to show us who we are (as Hamlet says), then Shakespeare succeeds. And if one purpose of that action is to make us feel recognized and known, he gives us that, too.

Because I have nothing better to write about today, I will offer two examples, from speeches which, set against each other, express diametrically opposed but universally recognizable human experiences. The person who wrote these speeches knew what he was describing, and he knew how to describe it.

First: apathy, listlessness, depression. Anybody feel that way these days? Has anyone felt these things over the past year? Hamlet is your spokesperson. In acts one and two, he's depressed, and he's depressed about the fact that he's depressed. ("Melancholy" would be his word.) What interests him? Nothing. What used to interest him? Everything. We think of Hamlet's goal as finding and punishing his father's murderer. It is, but his underlying goal is recovering the self he has lost. Ophelia, too, wonders where he's gone: "O, what a noble mind is here o'erthrown!" But Hamlet wondered first. Here are lines from his first soliloquy:

O, that this too too sullied flesh would melt,

Thaw, and resolve itself into a dew!

Or that the Everlasting had not fixed his canon

This is definitely suicidal thought. But the lines communicate the widely recognizable, garden-variety suicidal thinking of one who is finding relief in fantasizing about suicide because he lacks the energy to off himself, even though he finds life worse than a drag. Like Keats (doubtless inspired by this speech), who wished, in "To a Nightingale," "to cease upon the midnight with no pain," Hamlet doesn't want to take the initiative for such a choice. He just wants to melt into a goodbye (an "adieu." He's still got enough energy for a smattering of wordplay). He next claims that all that's stopping him is God's edict against "self-slaughter," with another little pun on the "fixed canon," which is both a rigid restrictive rule and a weapon aimed at that rule's violation. But Hamlet is full of reasons not to do things. This is his first. He's apathetic, listless, and unhappy, and nothing delights him. He says it best: "How weary, stale, flat, and uprofitable / Seem to me all the uses [customs] of this world!" No spark of interest resides in anything. It's all stale. Flat. Weary. Useless. He wasn't always like this; he doesn't know why he's like this now. He later tells Rosencrantz and Guildenstern, "I have of late -- but wherefore I know not -- lost all my mirth . . . and indeed it goes so heavily with my disposition that this goodly frame, the earth, seems to me a sterile promontory." Surprisingly, these sour lines are the lead-in to the famous exclamation, "What a piece of work is a man!," which, extracted from context, sounds exalted and appreciative. It isn't. Hamlet follows that line with, "And yet, to me, what is this quintessence of dust? Man delights not me." It's all not only dust, it's absolute, concentrated dust.

Yes, he's depressed, and he knows how to say so. In other words, Shakespeare understood depression -- the most enervated version of melancholy -- and knew how to remember and describe it.

Many excellent expressions of joy exist in Shakespeare, but one of the best is found in The Merchant of Venice, in lines spoken by young Bassanio, once it is confirmed that he has won the fairytale-like "casket test" which gives him the right to marry Portia, whom (maybe) he loves. He says he is too joyful to speak, although, of course, being a Shakespeare character, he still can, and in blank verse, too. He compares his (alleged) confused inarticulateness to the competing voices of a happy crowd which, "blent together / Turns to a wild of nothing save of joy / Expressed and not expressed." A wild of nothing, save of joy. All words unintelligible, canceling each other out, but the sound of happiness still audible. This is the paradox of joy unspoken, but still, somehow, spoken. So, whereas Hamlet has no joy, and many words ("Words, words, words" he drones), Bassanio has no words, and transcendent joy.

Countless shades of human experience reside between these two extremes. I would bet that many of them are inchoate, sensed but not clearly seen, until precisely described. Most people, even the wordiest, lack that level of precision. Where Shakespeare found it, what supplied him with that talent, is a mystery of the ages . . . .

Posted by Grace Tiffany at 5:59 AM