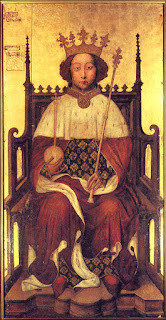 Richard II, pictured above on the right, is the less famous King Richard. He's the one whose bones weren't discovered in a Leicester parking lot in 2015. He died
some seventy years before the reign of bad Richard III, England's bogeyman. Richard the Second ruled in the late fourteenth century, during the time of Geoffrey Chaucer, and well before the Wars of the Roses tore England apart. This second Richard (the first was Richard Lionheart) was crowned king while still an adolescent, and his rule, which ended rather unsuccessfully with his deposition and murder, showed signs of immaturity. Shakespeare followed his historical sources in presenting Richard as a fashion-mad spendthrift who trampled on the rights and properties of his high partners in government, the members of the Houses of Lords and the representatives of the Commons. Shakespeare's Richard the Second's fatal error is to think England is summed up in himself. Believing he is God's direct representative (rather than God's indirect representative, which was how even fourteenth-century English folk, not to mention Shakespeare's audience, viewed their monarchs), he repeatedly asserts his absolute power to do exactly what he wants. Appropriate his neighbors' estates? He can! Intervene in judicial combats? He can! Why? Because he's king, innit? As Richard puts it, "Is not the king's name twenty thousand names? . . . a puny subject strikes / At thy great glory!" (He's talking to himself, there.) He goes on. "Not all the water in the rough rude sea / Can wash the balm off from an anointed king; / The breath of worldly men cannot depose / The deputy elected by the Lord."

Poor little Richard. He is, and was, so wrong! He got away with his God-voted-for-me act for about five minutes, but . . . . Let's depart from Shakespeare for a moment, and let two medievalist historians tell the story.

Richard II "filled the bureaucracy with servants completely obedient to him. He also created peerages for many of his favorites and appointed some of them members of his council. Thus he secured firm control of the council and a strong party in the House of Lords [the higher chamber of government, in the 1390s]." Richard also "pack[ed] the House of Commons" with his supporters. His enemies were then "arrested, convicted by the packed House of Lords, and either executed or exiled. Richard then made it plain that he proposed to rule as an absolute monarch in the future. Parliament was persuaded to delegate its powers to a committee chosen by the king. . . . By these maneuvers, the king had apparently emancipated himself from all parliamentary control."

But wait. Not so fast. The historians continue.

"In making this claim, Richard went too far. The English barons and people were used to quarreling more or less amiably with their monarchs over what limits should be set to the royal authority, but they had no intention of even considering the doctrine that there should be no limits. . . . Richard's enemies were determined to remove him from the throne, and were in a position to compel him to abdicate." Many "wanted to establish the principle that a king could be legally deposed."*  Although that principle would have to wait three centuries for its constitutional enshrinement, Parliament wasn't willing to wait that long to get rid of a king who comported himself like a god. By a formal procedure, they deposed him, and put someone in his place who, though far from perfect, better understood that the king was a cog in a larger wheel, and not the wheel itself.

Consider that date, next time you think you'll insult someone's politics by calling them "medieval."

Richard, like the average hop-toad, was smarter than our own would-be monarch, Donald Trump. Shakespeare's Richard is highly poetic. He knows some history, and can utter resonant terms ("you Pilates / Have here deliver'd me to my sour cross"; "I wasted time, and now doth time waste me"). No troglodyte, he can do more than dully repeat the same unconvincing phrases over and over ("No collusion!" "Fake news!"). Trump could not compete with Shakespeare's doomed king for stage presence. Certainly D.T. lacks the imagination to conjure the kind of theater Richard creates when he calls for a mirror, gazes into it, then smashes it on the floor in front of his political adversaries, declaring, "As brittle as the glory is the face." Alas! Richard learns to speak with the voice of the Preacher of Ecclesiastes, but the current U.S. president, the very stable genius, stays stuck at the level of a fifth-grader who hasn't digested lesson one about the three branches of government, and is unaware how dumb he sounds. Impeachment? "I don't think the courts would allow it." "My lawyers keep telling me I can use executive privilege. . . . Powers like you wouldn't believe!" Ignorance like you wouldn't believe, you mean.

Still, language and smarts aside, there are points of comparison between Trump and England's golden king Richard the Second. Indeed, when my class was discussing Richard's history, certain likenesses between the behavior of the self-flattering young ruler and the geriatric baby who now occupies our White House were too obvious to ignore. They were, however, too depressing to discuss. After I read aloud Tierney's and Painter's description of Richard's struggles with England's medieval Parliament, my students and I just looked at each other sadly, sighed, and moved on to Richard's death scene.

This was the first time I had ever found Richard II to be a depressing play. What saddened me was not the likeness of young Richard's grandiose self-regard to the colossal egotism of toddler Trump. No. What depressed me was the apparent superiority of the medieval House of Lords to our current U.S. Senate. I grew up thinking I lived in a country where separation of powers was a sacred principle, and where elected representatives took seriously their obligation to keep a power-mad president in check. I watched how the Senate behaved during Watergate. (Like a Senate.) Shakespeare's play made me notice that the earls and barons who comprised the medieval parliament took their similar obligation seriously in the 1390s. But in 2019, in what is supposed to be a democracy, arch-hypocrital Senate leaders Mitch McConnell and Lindsey Graham, and most of their followers, do not. They slavishly follow the Man Who Thinks He's King, the 73-year-old child whose obstruction of justice is now a matter of public record, and who uses "emergency powers" to trample on the law and bypass the will of Congress whenever it conflicts with his own. Our Upper Chamber, the Republican-dominated Senate, prefers its temporary seat in the sun to the rule of law. They'd rather have a king than a president, if he chooses judges they like. Why are they Americans? Are they Americans?

Let's not call our national situation "medieval." It's much, much worse than that.