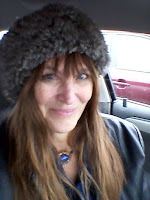 Grace Tiffany is a Shakespeare scholar who uses fiction as an additional medium for exploring the early modern world. She's edited Shakespeare's The Tempest and written articles and nonfiction books about Renaissance literature, as well as six historical novels set in the Renaissance or Middle Ages, including Will (Berkley 2004), My Father Had a Daughter (Berkley 2003), Ariel (HarperCollins 2005), The Turquoise Ring (Berkley 2005), Paint (Bagwyn Books 2013), and Gunpowder Percy (Bagwyn, 2016). Her first novel, My Father Had a Daughter, appeared on the Booksense 76 independent bookstores’ best-books list of 2003. Her fourth, Ariel, was listed as a best book by the National Library Assocation in 2006. Her third novel, The Turquoise Ring, is a retelling of Shakespeare's The Merchant of Venice from the perspective of the five women in the play. The book has been translated into Hebrew, Russian, and Hungarian (Magyar). Renowned Columbia University Shakespeare scholar James Shapiro has called The Turquoise Ring one of the six best creative adaptations of Shakespeare in history, grouping it with Millais' painting Ophelia and Tom Stoppard's dark comedy Rosencrantz and Guildenstern Are Dead. A recent novel, Paint, is based on the turbulent life of seventeenth-century poet Emilia Lanier, a reputed lover of Shakespeare and one of the first Englishwomen to see her writing in print. (Read Michigan Live's discussion of Paint at: http://www.mlive.com/entertainment/kalamazoo/index.ssf/2013/12/6_facts_about_the_scandalous_p.html.)

Grace Tiffany's latest novel, Gunpowder Percy, builds on the historical facts surrounding the 1605 Gunpowder Plot, in which Catholic extremists attempted to blow up the English House of Lords. The novel traces the intertwined fortunes of plotters Guy Fawkes, Thomas Percy, and Robert Catesby, two of whom are fanatical playgoers driven to regicidal fantasies by Shakespeare’s history plays at the Globe. Her latest academic book, from ACMRS Press, is a translation of selected works by the Argentinian author Jorge Luis Borges, entitled Borges on Shakespeare.