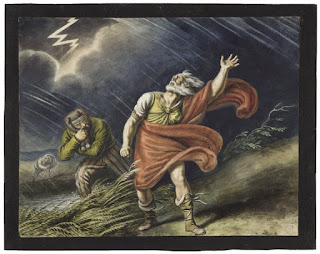 I spoke to Ian after our next class. I didn't tell him my suspicions, though he
probably suspected my suspicions. Perhaps other teachers had harbored similar ones, and had engaged him in similar conversations. In any case, after ten minutes of question and answer about the ideas expressed in the paper, I was no longer suspicious of Ian. Clearly his own mind and hands had generated the essay.

So I didn't doubt him a couple of months later when, in response to my invitation to students to write some "Fakespeare" for one assignment, he turned in the piece that I share with you below. "Fakespeare" in this case meant any Shakespeare scene rewritten, by the student, in the style of one of the other early English authors we had studied over the course of the semester. In this creative work, the students were to show their understanding of themes and literary conventions important, respectively, to Shakespeare and to the other author they chose.

Ian chose to rewrite the storm scene from King Lear in the style of the anonymous Beowulf poet. He had been struck by the play's ancient (in fact, pre-Anglo Saxon) British setting and by the relationship between mad King Lear and his retainers, the disguised Earl of Kent and the Fool, who follow him out on the heath and then into a hovel to give him succor during the storm. As loyal as the best of mead-hall thanes, they will not abandon their lord. Ian also saw a resemblance between the despair of the outcast, the wanderer, in a major Anglo-Saxon poem, and that of Shakespeare's king, rejected and thrust out of doors by his own daughters. And so, as Ian put it, "Here is act three, scene two, of King Lear as the Beowulf poet might have written it."

Crashing lightning, cold and swirling
winds, howling hard, and white ice-balls
pelted Lear: that lost and desperate
king who way-less, crownless drifted,
borne on brutish breeze, twice-betrayed
and tortured now, thus tearing at his beard,
his body and brain in the black of night:
both were in tumult, for his treacherous kin
had weakened his wits and worsened his fate:
the storm and the storm: one stinging his face,
the other his mind. In madness he went,
rage-refuge took in that raging tempest,
cursing the cruelty of the King of Heaven
and the wiles of women: web-weaving wretches!
The spit of fire, the spouting rain,
elements' rumble: all were nothing
to the tainted trust that trampled his heart;
for Lear's daughters, save Cordelia alone,
thanklessly taking the throne of Britain,
denied the king comfort or compassion,
gazed stony-faced, stood still as he fled
with none but the Fool to follow him out,
who mocked the mis-steps of the man he served.
Kent, as Caius, thus met craze-crested Lear.
Pity struck his heart; it pained him much
to see so fallen his once-great lord.
Battles numberless he'd bravely won;
as King, captain, Kent had followed him
time after time with troops to war;
Blood-thirsty blades, brain-bashing strength,
thus side by side they slew their foes.
Kent recalled this with keen memory;
still, seeing Lear he sobbed deeply,
for far-fallen was his friend and lord,
who ere age had overcome him
priceless pieces of princely gold
dispensed, sparing expenses none
for warriors worthy of winning fame.
But now a shade or shadow of Lear
or less remained of that mighty king,
haggard and desperate, helplessly lost.
All men thus meet the end of their days.
Kent spoke then, soft, his sire to recover.
"Bare-headed lord!" He begged him to follow.
"Hard by here a hovel there stands.
Friendship it offers from this frightful storm."
Lear was reluctant to lull his anguish,
preferring no friend but the fiend of night.
Yet, "Prudent wits awake in me,"
at last said Lear, by lingering grace.
"My boy, bring us to that bosom of straw;
mad-capped but cold, some meager comfort
I shan't refuse, so show the way!"
Prophesy-prone, the prancing Fool
made Merlinish talk ere taking his leave:
"When brewers mar their malt with water,
Tutoring lords their tailors instruct,
Heretics burn but in heat below,
And justly justice judges men,
When servants and squires forsake their debt,
When libel and lies should leave men's tongues,
tar-throated talkers truth-rinse their words,
cutpurses cruel crowds abandon,
usurers out in the open count
their gold, grim and godless sinners
construct churches, change to Britain then
will come: chaos, a kingdom confused.
That far-fetched time a few may see,
And going then will be gained by foot."

Ian is now studying Greek, Sanskrit, Germanic languages, and diachronic syntax and semantics at UCLA. Will he become a professor himself? Or a language consultant for the next iteration of Game of Thrones? Or both things, and many more besides? Time will tell. As for me, whenever I feel that my job is crazy, that I can't make old English literature meaningful to my students and that none of it makes any difference, I reread "act three, scene two, of King Lear as the Beowulf  poet might have written it," and then I don't feel that way anymore.
Posted by Grace Tiffany at 4:07 AM