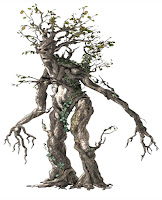 First, he was annoyed -- indeed, angry -- with what he saw as the damage done by Shakespeare to the English idea of Elves. Elves, Tolkien said, was "a word in
ancestry and original meaning suitable enough" to the proud beings of that name in his Silmarillion and The Lord of the Rings (see Letter 151, to Hugh Brogan, 18 September 1954). "But the disastrous debasement of this word, in which Shakespeare played an unforgiveable part, has really overloaded it with regrettable tones, which are too much to overcome." Not just reprehensible: unforgiveable! Tolkien was of course referring to the cute spirits of A Midsummer Night's Dream, which, though mostly called fairies, are sometimes called elves, as though the two kinds of beings were one and the same. Shakespeare's fairies have names like Puck and Cobweb and Peaseblossom, are generally about one inch tall, and travel around on the backs of beetles and suchlike. The most violent and heroic action any one of them gets into is Puck's pushing a housewife off a stool. These are not the kind of elves Tolkien wanted Legolas and Glorfindel to socialize with, or to be confused with by readers. Tolkien's Elves, as all Tolkienites know, are mostly taller than humans, can build houses, and also slaughter orcs, and sometimes dwarves, men, and even each other, with bows and arrows and swords. Unfortunately, A Midsummer Night's Dream was so popular that it forever affected the English fairy/elf tradition, or, as Tolkien saw it, debased it beyond redemption, with the image of cute little elves, causing Tolkien to regret that he had even chosen to call his elves "Elves." Perhaps that's why he gave them a variety of other names, such as the Eldar, and some other words that I can't remember right now.

Tolkien's other problem with Shakespeare can be summed up in a title and a name: Macbeth. Those who spend a lot of time at their basement computers researching these kinds of things know that Tolkien's Ents and Huorns, the militant marching tree-people featured (mainly) in The Two Towers, were born from Tolkien's disgust with Macbeth's Birnam Wood. In Shakespeare's tragedy, the Witches predict that Macbeth will not be dislodged from his ill-gotten Scottish throne until the forest of Birnam comes to his castle, "high Dunsinane Hill." Macbeth knows it's impossible for a tree to "unfix his earthbound root," so this prophecy cheers him up. Of course, he's foiled in the end because the soldiers advancing against him, like the wily Viet Cong, camouflage themselves with branches torn from trees, and thus the woods do come to Dunsinane, in a way unforeseen. Tolkien hate, hate, hated this. I don't exaggerate. Here are his words, from a letter to W. H. Auden: "[The Ents]' part in [The Lord of the Rings] is due . . . to my bitter disappointment and disgust from schooldays with the shabby use made in Shakespeare of the coming of  'Great Birnam wood to high Dunsinane hill'; I longed to devise a setting in which the trees might really march to war." Hence, the Ents. Take that, shabby Shakespeare!

Now, I think The Lord of the Rings is one of the greatest pieces of literature ever written, so I will not be condemning the Ents or the Elves or anything else in the work, except for Tom Bombadil, who is pointless. In fact, I greatly prefer Tolkien's elves to Shakespeare's, and am inclined to think that, as far as A Midsummer Night's Dream is concerned, Tolkien has a point. But I will say that Tolkien did not at all understand or appreciate Macbeth, which he mistakenly called a "fantasy." So adoring of fantasy was Tolkien that he could not entirely appreciate a work of another genre, especially if it had characters in it who in part derived from fantasy, such as witches. It is, in fact, the presence of the Witches in Macbeth that confused Tolkien as to its category -- not the presence of Banquo's ghost, since Tolkien knew very well the difference between a fantasy and a ghost story. However, because he associated witches with the medieval genre of romance (Morgan Le Fay and the like), Tolkien wrongly assumed that a play containing witches must be, or must have been intended as, a "Faerie" play. After all, Shakespeare had written one before, in A Midsummer Night's Dream (though he totally botched the elves). What, then, to do with a fairy play that passes up its grand chance to make trees magically walk? What but furiously reject it in these terms: "To be dissolved, or to be degraded, is the likely fate of Fantasy when a dramatist tries to use it, even such a dramatist as Shakespeare. Macbeth is indeed a work by a playwright who ought, at least on this occasion, to have written a story, if he had the skill or patience for that art" (Tolkien, Tree and Leaf, 1966).

Well. If he'd had the skill or patience to write a fairy-story instead of an inferior play, Shakespeare might have made a success of it. But he didn't. Talentless and impulsive as usual, Shakespeare threw the hastily written Macbeth up on the scaffold and peopled the disastrous work with actors, but then ran into a problem. He couldn't make Birnam Wood actually be walking trees, because on stage they wouldn't have looked real.

Take a breath, Shakespeareans. As we know, Macbeth was not conceived as "fantasy" but as a historical tragedy. It comments directly on politics and misguided human choices. The Witches, whom Tolkien calls "almost intolerable," are a puzzle, but Banquo and Macbeth do not themselves speak from a world of fantasy when Banquo asks them if they are "fantastical" (1.3.53). Asked within a fantasy tale, the question would be inappropriate. (Captain Kirk doesn't ask whether a Klingon visitor is a science fiction character.) English Jacobean audiences considered witches a part of their own, non-romance world. They were people who dabbled in black magic, not evil fairies stepped out of the pages of an Arthurian tale. Likewise, Banquo and Macbeth are not chivalric heroes but figures from relatively recent history, operating politically in a recognizable reality. The evil that permeates their world has its reflection in the Witches. But no one who paid very close attention to the play could doubt that that evil's source is the human hearts of Macbeth and his wife. A central, tantalizing question of the play -- left to readers' and audiences' speculation -- is whether the apparitions with which the Witches plague Macbeth (and which no one else sees) are evidence of magic, or simply illusions projected by Macbeth's power-hungry mind, responding to the Witches' suggestions. It is the Macbeths' ambition, and not "fairy" magic, that most interests Shakespeare. From his drama of human politics, equivocal statements, moral mistakes, and the claustrophobic effects of all these on the soul of a soldier, the fifth-act spectacle of walking trees could only have been a distraction.

Tolkien didn't get Macbeth. That is not to say that he didn't understand dramas of moral choice and even of politics. (Consider, for examples, the strategies and the fall of Denethor as portrayed in The Return of the King.) It's just that Tolkien found story, not play, a freer domain for any plot, and found all tales most enthralling when they unfolded in some Other World, where choices were deeply inflected by inhuman forces and potent talismans: by wizardry and Rings of power and virtuous stones and Elvish ropes which unknotted themselves and came home to their masters. This world, which Tolkien called "Faerie," was finally less interesting to Shakespeare than the world he actually lived in. To Tolkien, it was almost the only thing that mattered.
Posted by Grace Tiffany at 4:33 AM