Too Dumb For Tragedy

A friend who works in Washington tells me the only way people can understand current political craziness is to read Shakespeare. I know what she means. I think Shakespeare is connected to everything and vice versa. So many other folks also think this that Shakespearish interpretations of Trump have been a feature of news and commentary since well before the election. The New York Public Theater is staging a "Trump" Julius Caesar, and just the other day a Washington Post article compared the U.S. president to the mad and erratic King Lear. It's easy to understand the association. Like Lear, Trump is childishly sensitive to insult and makes rash decisions based on his sense of personal injury. And the actions of a president, which have momentous implications for an entire people, naturally prompt thoughts of tragedy, which since its origins in Aeschylus has represented mistakes in high places.

But at the same time I'm offended by these comparisons, not on Trump's behalf, but on behalf of King Lear, Richard III, and Macbeth. I consider these characters friends. The fact is, Trump is way too dumb to be a credible real-world analogue for any of them. Despite their huge flaws, Shakespeare's heroes are highly intelligent,
well-versed (in more ways than one) in their countries' histories, and, at least in the long run, painfully and astutely self-reflective and morally aware. They have the capacity to learn. At tragic cost, they do learn. And they speak well. So -- Nixon as Richard III, maybe. Jimmy Carter as Hamlet, possibly. Donald Trump -- no. (Is it a cosmic joke that his name sounds like "Donald Duck"?) Even the more intelligent plotters who surround him lack the ingenious Machiavellianism that imparts one kind of tragic stature. (Machiavellianism might be there, in a wannabe way, but not genius.) Betsy DeVos as Lady Macbeth might seem to hold promise if we consider that Lady M is finally found repeating over and over, endlessly and blankly, the same phrases she uttered on the night of King Duncan's death ("To bed, to bed, to bed!"). But this empty-repetition stage comes at the end of her career, after she's lost her mind. DeVos's vacant reiteration of catch-phrases like "I believe the states should have the right to make their own decisions about education" and "I believe families know best how to educate their children" (as though those beliefs were the same) -- her thoughtless reiterations of these mantras as "answers" to all questions about her views on education -- were her mode from the beginning. Of course, DeVos, like nearly everyone, is nicer than Lady Macbeth. The point is, she lacks tragic stature. Unlike the Scottish queen, she's had no higher mind to lose.

There's a similar basic difference between the present president and Macbeth, Hamlet, Richard III, and even mad Lear. Those Shakespeare characters' soliloquies show us the searching nature of their conflicted, probing minds. They can be terribly wrong, but they are never unaware, and never uneducated. (Imagine a Hamlet as ignorant about Denmark's history as is Trump about the American Civil War!) Most important of all, Shakespeare's heroes are never incurious -- quite the opposite -- and that's another way of saying they are never stupid. None of them is a Trump, who "knows" everything he wants to know already.

Yet can we believe that William Shakespeare, who made his stage the world, has not furnished us somewhere, in some corner of his plays, with Trumpish folk? We cannot believe this. Even though the least of Shakespeare's characters possess far more verbal skills and a bigger vocabulary than our current head of state, yet, still, on that great stage of fools (Lear says that, by the way), we should be able to find some Trumps. The trick is to start, not with tragedy, but with comedy.

TrumpBottom. Let's consider the resemblances between Trump the Dealer and Bottom the Weaver from A Midsummer Night's Dream. Bottom is the amateur actor who so hungers for attention that he tries to hog every part in Peter Quince's play. He's already got the starring role, but still cries, "Let me play the lion too! I will roar that it will do any man's heart good to hear me." We might think of Bottom when we regard Trump's recent action, at a NATO meeting, of shoving the gracious president of Montenegro aside so he could stand in the front of the group and preen. I would here supply the news clip, but it's too painful for any of us to watch the president of the United States acting this way. Like Bottom, Trump wants to be at the center of a one-man show, orchestrating post-election campaign rallies and televised "reveals" for his policy decisions. Also, Bottom's claim that he will play his various parts "in either your straw-color beard, your orange-tawny beard," or "your perfit yellow" might also serve for Trump if we changed "beard" to "hair." The Bottom-Trump analogy holds some water. It breaks down only when we consider that Bottom, though simple and naively egotistical, is mostly gentle and polite. "I pray you, commend me to Mistress Squash, your mother, and to Master Peascod, your father, Good Master Peaseblossom. I shall desire you of more acquaintance, too," he says to the fairies. It is impossible to imagine Bottom publicly calling a former associate a crazy nut-job. And though he enjoys an erotic interlude with Titania, his response is to plan a song about it ("Bottom's Dream"), not to go around bragging that he grabbed her by the pussy. Ultimately, Bottom is too kind and articulate and not nearly crude enough to be Trump. Let's move on to: 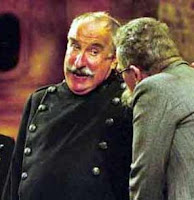 Trumpberry. The officious police constable in Much Ado about Nothing has much in common with our leader. "If there be any matter of weight," he says, "call up me." Dogberry's the man. His self-regard is matched only by his ignorance of the requirements of his job. In one interchange, he directs his deputy to arrest someone the deputy is not legally empowered to arrest -- "You may stay him!" -- and the deputy feebly protests, "Nay, by'r lady, that I think 'a cannot," only to be overborne by his superior, who claims he "knows the statutes." He doesn't. Later, a colleague frankly tells him he doesn't know the proper procedure for examining suspects. It would be nice if someone would as frankly inform Trump of his ignorance regarding the legislative process, including the rules of filibuster and reconciliation vote and the limits of executive authority. On a minor note, Trump commits misspellings, Dogberry malapropisms -- "suspect" for "respect," "dissembly" for "assembly," and he thinks "tedious" is a compliment. Dogberry considers himself a "wise fellow" -- "very good genes, very good genes," as Trump might say -- but in fact, he's an ass. Have we found our Shakespearean Trump? We've come close, but hold on for a moment. Yes, Dogberry is ignorant and vain. But he's not dishonest and he's not self-serving. He makes a fool of himself, but he does so in order to bring truth to light and punish real slanderers. In fact, he turns out to be one of the heroes of the play. We can only wish Trump's motives were as pure, and hope, dubiously, for as fortunate an outcome to some thoughtless comments. 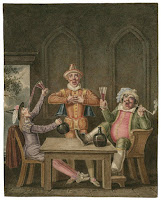 Well, what about Sir Trumpy Belch? Sir Toby Belch of Twelfth Night is in some ways like Donald. To begin with, he spends his time free-loading on an estate, eating his cousin's cakes and ale, perhaps getting double scoops of ice cream. Trump's expensive lifestyle, now subsidized by us -- with Secret Service agents providing security at Trump Tower, Mar-a-Lago, and the White House -- comes to mind. Trump's late-night Tweet revels might also remind us of Sir Toby's disregard for proper hours. And what Bottom and Dogberry lack in Trumpish disloyalty, hypocrisy, and professional treachery is amply supplied by Sir Toby's cold, manipulative use of Sir Andrew Aguecheek, a "friend" whom he keeps around only to drain his pockets. Still, Sir Toby seems to be having much more fun than Trump is capable of having, and he's actually more interesting. Perhaps this is because he, unlike Trump, is witty and imaginative.

It turns out to be hard to find a good analogue for the president even among Shakespeare's comic fools. Perhaps we should turn to a third genre. Let's take a look at the history plays. 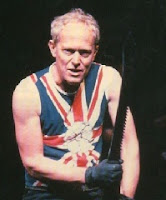 Trump Cade. And here, perhaps, we have it. Don't bother to think "Falstaff." The fat knight is much too intelligent to creep under the low bar we've set, even if he were physically capable of it. But Jack Cade just might make the grade. In Henry VI, part 2, he's a strident commoner who claims he's descended from royalty (good genes, very good genes). He rallies the citizens, claiming that life will be much better for them once he's king. "There shall be in England seven halfpenny loaves sold for a penny; the three-hoop'd pot shall have ten hoops." With Cade in charge, no one will have to pay for anything, and everyone will worship him. Those who can read (Cade can't) will be penalized. "I must sweep the court clean of such filth as thou art," he tells Lord Say, planning to drain the swamp. Say's crime? "Thou hast most traitorously corrupted the youth of the realm in erecting a grammar school." In other words, Say and lords like him have wasted taxpayers' coin on education.

We never get to find out what kind of king Cade would have made, since his career is cut short before he makes it that far. And, to be fair to him, amongst all his idiocies he (a real historical figure) raises some legitimate complaints about the way justice is dealt out unequally between the educated and the uneducated in England. But his solution -- let's get rid of education, and spend more on the army -- brings us closer to Trumpism in Shakespeare than we've been yet. Jack Cade is more Trumpy than any of Shakespeare's tragic or comic figures because he's a clown who's also dangerous.We should laugh at him. But we should also contain and demote him as soon as we can -- not in the grisly way Jack Cade is dealt with (Kathy Griffin's recent decapitated-Trump-head joke was not funny), but by the dictates of the thing Cade himself wants to "trump," namely the law. Let's not "kill all the lawyers," as a Cade follower brightly suggests. We might need one to defend ourselves against Trump. And Trump needs one to defend himself against us.
Posted by Grace Tiffany at 4:42 AM