In Kalamazoo, Michigan, where I live, various churches and charities have been busy helping about 30 newly arrived Syrian families who have managed to acquire refugee status in the United States. Most of these families have a lot of children (one has nine), and so the total number of relocated people is over 200. The first of the families got here in November. Coming from a dry and temperate region, and from refugee camps which lacked room for lots of personal belongings, they arrived for the Michigan winter wearing thin pants and slippers and, for the most part, no overcoats. So the first order of business was clothes.

They got them. Within days, local citizens coordinating charitable efforts were wading through piles of donated ski jackets, snowsuits, hats, mittens, and gloves of all sizes, and looking for a large central warehouse in which to store the extras. Space was soon provided by a mosque near Western Michigan University's campus, where Kalamazooans also brought household items, and a regular Saturday morning
event was instituted whereby families in need came for ESL (English as a second language) lessons, "shopping" (for free things), and general socializing with the larger community (composed of Democrats, Republicans, Independents, Christians, Muslims, Jews, agnostics, atheists, Buddhists, Hindus, and your random Druid). A local middle school began providing language instruction at night, and a university group was soon organizing social and educational events for the families. These activities continue, and a doctor at a large health clinic now examines Syrian newcomers for free. The clinic has engaged an Arabic speaker to work with him, since most of the Syrians don't know English yet.

As I suggest, much of this assistance was first sponsored by charitable institutions (among which I include the churches, synagogues, and mosques). But it's remarkable how much of the help is now being given by citizen volunteers who have no special affiliation with any church or charity. My across-the-street neighbor, who isn't very churchy, has for five months been running a group of approximately fifteen friends and neighbors which she calls "Team Falid," after the large family which is the focus of her efforts (I've changed their name). Members of the group spend hours providing English instruction to the adults and math tutoring to the kids, driving folks to dentists and doctors, facilitating donations of bikes and even cars for transportation, and generally helping the family adjust to their new life. A woman in the English department where I teach offered ESL lessons on her own time. Another man paid for health club memberships for the family's older teenage boys, who are out of school, looking for jobs, and in need of places to meet other young people. Two others donated use of their cars and hours of their time to provide the family's father with driving practice in advance of his American driving test (which he passed). A friend on the other side of town coordinates similar efforts among her friends and neighbors, using time borrowed from teaching her political science classes in a city 50 miles from Kalamazoo. She's also a single parent. Some of us employ those imperfect translation apps on our phones. These facilitate communication and also some yuks. (If you want to see why, activate Google Translate for English-to-Arabic, type in an English phrase, then try to translate the resulting Arabic phrase back into English using the same software. See what you get.)

Those of us who have helped the Syrian families in small or big ways don't feel like grand benefactors. It's humbling to witness and acknowledge how lucky we are next to people who have lost their homes, feared for their lives, and endured the deprivations of the camps, and who still agonize over the fate of friends and family members left to the bombs and chemical weapons destroying their homeland. We hear parts of their stories, told in broken or translated English over the cups of tea pressed on us by our hosts, who, though crammed into small living spaces, insist on making space for us on their couches, and on offering warm hospitality despite the difficulty they have communicating. At my neighbor's house, a few Syrian women recently cooked a delicious dinner and taught a cooking class for some of their new American friends. Now we know how to prepare chicken baharat and cabbage salad. Our four local Middle Eastern restaurants should worry. But in fact, those restaurants' owners are too smart to be concerned. Some of them are hiring.

"That's how it's supposed to work," one of the citizen helpers commented on Facebook, when it was posted that one of "our" refugees had found a job at a local hospital. Given time and the good will of a community, that is how it does work -- not just in Kalamazoo, I suspect, but in a lot of American cities.

So what would Shakespeare say?

We can read what he did say. First, the context. Sixteenth-century England experienced an influx of immigrants from the Continent, who came north at various times fleeing wars and religious persecution. Spanish Jews (conversos), French Huguenots, and Italians were among the refugees. As in many countries and times before and since, such immigrants were greeted with scorn and suspicion by nativists who feared the influence of foreign ways on the local culture and also the appropriation of their jobs. An anonymous late-sixteenth-century play called The Book of Sir Thomas More contains a passage generally acknowledged to have been written by Shakespeare (and pictured above, in his rarely seen hand) that dramatizes one man's response to a 1517 May Day London riot protesting the effects of newly arrived Northern Italian immigrants on the local economy. Shakespeare has this authority figure confront the rioters and chide :

Imagine that you see the wretched strangers,
Their babies at their backs and their poor luggage,
Plodding to the ports and coasts for transportation,
And that you sit as kings in your desires,
Authority quite silent by your brawl,
And you in ruff of your opinions clothed;
What had you got? I'll tell you: you had taught
How insolence and strong hand should prevail,
How order should be quelled; and by this patter
Not one of you should live an aged man,
For other ruffians, as their fancies wrought,
With self same hand, self reasons, and self right,
Would shark on you, and men like ravenous fishes
Would feed on one another . . . .
Say now the king
Should so much come too short of your great trespass
As but to banish you, whither would you go?
What country, by the nature of your error,
Should give you harbor? Go you to France or Flanders,
To any German province, to Spain or Portugal,
Nay, anywhere that not adheres to England,
Why, you must needs be strangers: would you be pleased
To find a nation of such barbarous temper,
That, breaking out in hideous violence,
Would not afford you an abode on earth,
Whet their detested knives against your throats,
Spurn you like dogs, and like as if that God
Owned not nor made not you, nor that the claimants
Were not all appropriate to your comforts,
But chartered unto them, what would you think
To be thus used? This is the strangers' case,
And this your mountainish inhumanity.

Only Shakespeare would think up a word like "mountainish" to describe the magnitude of the Mayday rioters' meanness.

In Shakespeare's own time, some eighty years after the riot represented in the play, some of the newcomers disliked by Londoners were Dutch tradesmen, fleeing war in Flanders. A quarter-century later, some of those Dutch people, along with a lot of English people, started arriving as immigrants in North America. A lot of them eventually came to Michigan, where, on this five-hundredth anniversary of the anti-immigrant London May Day Riot, they're not holding aloof in the "ruffs" (fine clothes) of their opinions, but donating hats. Instead of "sharking" like "ravenous fishes" on the newcomers, they're making cabbage salad. 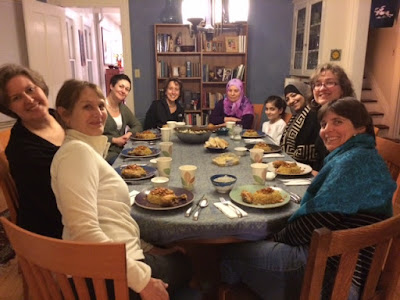 Posted by Grace Tiffany at 4:51 AM