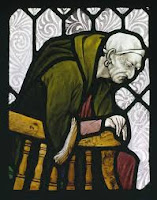 One of the many insulting things about Facebook and Google is their personalized highlighting of geezer-oriented products and articles to folks whom their spy system has deduced are over 50. This would include me and my friends from high school and college. Most of my friends are better than I am at ignoring "EIGHTY-YEAR-OLD GRANDMA LOOKS 45!" and "Bronson Health Center. Your Choice for Congestive Heart Disease." I myself get annoyed, and tend to check the little box requesting no further ads from these sources. On the proffered list of reasons why one is offended by the ad, I always check "It's against my religion."

What does this have to do with Shakespeare?

Well, as followers of this blog know by now, all roads lead to and from Shakespeare. Will had a lot to say about everything, including aging. Some might think he had little right to comment on that topic, since he died when a mere babe of 52. "That time of year thou mayst in me behold / When yellow leaves, or none, or few, do hang" -- please! I know 50 was not the new 40 in 1616, but by most
accounts Shakespeare wrote those lines when he was only in his 30s. But he perceived no contradiction because he was Shakespeare. As Borges observed in a wonderful short story, Shakespeare was most himself when imaginatively inhabiting the minds of others. Why shouldn't those others include old people? In fact, extra-dramatic evidence suggests that Shakespeare excelled at playing old men's parts on stage.

It was the minds and lives of aging men rather than those of aging women that Shakespeare preferred to dramatize -- and he did this sometimes cruelly, and sometimes compassionately. A late, beloved colleague, the Renaissance scholar Tony Ellis, has explored how some of Shakespeare's comedies contribute to an ancient Western dramatic tradition of mocking the "senex," or old man, for being feeble, lustful and yet sexually incapable, and greedy and miserly. Ha ha ha! howled the Elizabethan audience, happy to see these old coots kicked out of the way by the younger generation. Examples of the old man as comic scapegoat in Shakespeare include Gremio in The Taming of the Shrew, who, foiled by handsome young Lucentio in his quest for a maiden's hand, ends the play "out of hope of all but my share of the feast." (At least he gets that much.) Both comedies and tragedies -- A Midsummer Night's Dream, The Merchant of Venice, Romeo and Juliet, Othello, and King Lear -- offer us a parade of curiously aged fathers, seeming not one but two generations older than their offspring, who care for nothing but the wealth a daughter's match can bring. Each of them gets the dramatic equivalent of a kick in the pants (sometimes literally) -- or worse.

But of course, Shakespeare being Shakespeare, the comic -- or tragic -- humiliation of the old man is only part of a much larger and more humane theme. Even among some of the plays named above, immense compassion is prompted in the audience by the eloquent dramatization of these misguided fathers' sufferings. For "Old Shylock," the loss of a daughter is the loss of a family heritage; of precious memory itself. Jessica has stolen and sold a turquoise ring that Shylock "had . . of Leah" -- her mother -- when he "was a bachelor."  Shrew's Gremio may be a greedy old sucker, but old Baptista, father of two girls, holds out not only for a rich husband for the unlikeable elder, but for one who will genuinely love her. And then there's King Lear, who "should not have been old before [he had] been wise." At the center of his great tragedy, Lear painfully enacts the desperate fits and childish actions of an "old, kind king" who feels his mind going. When I say "painfully," I mean it's painful for the audience. At one point Lear, castigating himself for his own forgetfulness, beats himself on the head, repeating, "Lear, Lear, Lear! Beat at this gate that let thy folly in!" Try to watch that without weeping. King Lear is rightfully known as the play that most poignantly dramatizes the mental and emotional struggles of the very old as they approach life's end. Even so, this tragedy contains no more poignant description of old age than one found in the light comedy, As You Like It, when a very old, loyal household retainer offers his life savings to his out-of-pocket young master. Old Adam (such a name!) speaks of the money he's scraped together against the day when "service should in my old limbs lie lame, / And unregarded age in corners thrown." The elision of the verb in the second line strengthens the image of the weak old person, his strength used up, forgotten by and invisible to the young, and heedlessly left in a corner. Sad! True! Fortunately the play shows a quite different fate for old Adam, who is tenderly cared for by the young master as his strength ebbs.

Is Shakespeare interested in aging women? Not nearly as much as was his playwright rival, Ben Jonson, who castigated women "of a certain age" for painting their faces and trying to look young -- even while he, like most Renaissance men, thought women's value was directly commensurate with their degree of youthfulness and beauty. I found Jonson's contradictory attitude toward women and aging an irresistible topic for my recent novel, Paint (Bagwyn, 2013). It's different in Shakespeare, where characters who get on women's cases for trying to look younger are usually screwed up in the head. Consider Hamlet, who, in a very weird and famous scene, advises a skull to go (go how?) and tell an aging lady that even though she's wearing makeup she will still die.

In general Shakespeare doesn't care too much one way or another what women do when they get old, because he's much more interested in aging men. However, we do have an interesting example of feminine vanity in Cleopatra, who jealously asks the age of her lover Antony's new wife. When disparagingly told by a messenger, "she's thirty," any good Cleopatra looks dangerously affronted, and any good Messenger looks like he wants to revise the estimate upward, since it was general knowledge in Shakespeare's time that Cleopatra, in this year, was 38.

However, towards the end of his life Shakespeare made aging women central characters in some plays. The romance Pericles follows Thaisa from her youth to the moment when, in her old age, she joyously confronts her long-lost husband and now-grown child at the temple of Diana in Ephesus, where she is a priestess. At least as moving as this wonderful scene are the final moments of The Winter's Tale, when King Leontes' maligned wife Hermione, thought dead for many years, either comes back to life or is discovered still to be alive (directors and scholars disagree). At first Leontes objects to the "statue" of his lost wife, since it is so much more wrinkled than his wife was. But when the statue is shown actually to be Hermione, he embraces her wordlessly, overcome with emotion. In a play full of improbabilities and apparent magic, Shakespeare could have restored Hermione as the young woman she was when she "died." Nope. The woman who returns to her husband is marked by time, scarred by age -- and all the more beloved for this. And it's another "seasoned" woman, Paulina, who enacts the restoration, calling Hermione back to her old life before she herself, a widow, takes a similarly weathered old friend as her new husband. In this play, written nearly two decades after Shakespeare's early comedies, not only the young but the old are redeemed by love. At 46, Shakespeare was able to imagine this.

Who knows what he could have dreamed up at sixty?
Posted by Grace Tiffany at 7:06 AM