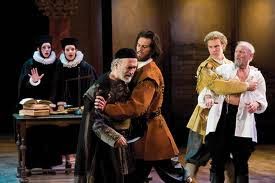 I've taught at four universities – two private, two public – over a period of almost thirty years, and during this time I've encountered some "liberal" humanities colleagues who are no more interested in freedom of speech than they are in the nocturnal habits of the African land snail. In fact, on a few occasions I’ve seen instructors take active steps, with an air of righteousness, to shut down, in their classrooms or at panel discussions, the expression of views unwelcome to them. Such teachers and scholars – with whose social and political opinions I often agree – can be vocal when describing how crucial the humanities are to the very existence of critical thinking and to the open sharing of ideas. Yet such behavior reveals that what they are truly committed to is
not that kind of openness, but the free play of their own voices, as well, often, as the voices of traditionally marginalized authors, scholars, thinkers, and students. In other words, they get it half right.


This is a predictable irony. The First Amendment seems simple, but its import is hard to grasp. It doesn’t exist to protect truth-telling (as opposed to truth-finding, for which it surely does exist). Instead, it's there to protect conversation. It exists to keep us from becoming passive receptors or too-powerful concoctors of one description of the world, even if that description is the best one going. It exists to let us argue. Thomas Jefferson called such argument debate. Russian literary theorist Mikhail Bakhtin called it heteroglossia. Sometimes, in my literature classes, I call it multivocality. Shakespeare just called it dialogue.

Open dialogue needs to be enshrined in law or by some other convention because, though we may flatter ourselves that we are open-minded, our natural tendency is to resist or even to silence views with which we disagree because we think them dangerous, or for any other reason (though it's usually because we think them dangerous). Knowing the human tendency, the framers of the Bill of Rights built free-speech rights into the Constitution. Shakespeare didn't have the Bill of Rights, but he had a powerful institution that also allowed for the free play of ideas: the stage.

The London playhouses were the closest thing in Elizabethan and Jacobean England to a forum for free speech. Yes, Renaissance plays were subject to censorship by a "Master of the Revels" (whose job title made him sound like a party guy, but who was somewhat more forbidding than that). And yes, early-modern players enjoyed indirect state patronage, being licensed by the Crown and formally in the employ of this or that high government official or royal-family member (Shakespeare's company was first the Lord Chamberlain's and later the King's Men). But in general, the playing companies operated as independent businesses, making their money from the paying public, performing in playhouses that they owned, buying and staging plays in unsupervised public venues, and only occasionally making such a scandal through their dialogue that a playwright (usually Ben Jonson) landed in jail. And this freedom was the norm despite the facts that the plays they staged, unlike those of the middle ages, were secular in subject matter and wildly complicated in theme and plot, and that they usually lacked any choral figure to lecture audiences on the moral meaning of what they saw.

That left it up to the characters to voice and influence audience views: on (for example) marital rights and obligations, sexual morality, appropriate modes of governance, legitimate and illegitimate kingship, anti-semitism, philosemitism, color prejudice, Catholicism, inheritance law, education, animal rights, atheism, and the kitchen sink (or pump). How do you state a subversive point of view when freedom of speech is not a recognized right? Give it to a tragic character, or, better yet, a comic one. Then, after that one speaks, have someone else come in and just as eloquently argue the opposite case. By these means, Shakespeare himself managed never to get arrested (though once he came close). Still, we might imagine the following judicial exchange: "Master Shakespeare, do you think a king's success rests on his ability to distract the populace with foreign wars?" "Me? I think nothing, milord. You confuse me with Henry the Fourth." "Ah. Well, then. Master Burbage, what are your views on European Christians' treatment of Jews?" "Me, milord? I can recite some lines from The Merchant of Venice, but I have no, as you might say, views." Shakespeare was smart. When he wanted to say something dangerous, he gave it to an actor to say in iambic pentameter. He knew what he was doing. As Thomas Hardy later wrote, "If Galileo had said in verse that the earth moved, the Inquisition might have left him alone."

Actors on the Renaissance stage got away with shocking dialogue not just by assuming the roles of imaginary, often verse-speaking characters, but by their very act of speaking in dialogue -- that is, in conversation. Thus for every unorthodox viewpoint, Shakespeare supplies a contradiction, another way to think about the matter. A famous example comes from King Lear's second scene. There the Earl of Gloucester laments in apocalyptic terms that the stars portend division among families and kingdoms. He exits, whereupon his son Edmund calls him an idiot ("This is the excellent foppery of the world, that when we are sick in fortune . . . we make guilty of our disasters the sun, the moon, the stars"). A similar instance of multivocality occurs at the end of The Taming of the Shrew. There the "tamed" wife Kate delivers a lengthy sermon about a wife's duty to obey her husband, her "lord," her "keeper." The speech elaborates on Paul's instructions to wives in Ephesians, but it isn't the only viewpoint expressed in the scene. Just before, Kate's sister Bianca has called her own husband a fool for relying on his wife to be "dutiful." In the modern theater, Bianca gets a big hand for that line, and I can't believe she didn't receive some applause from a few boisterous Shoreditch housewives in 1593.

So it went. Thomas Dekker, one of Shakespeare's playwriting contemporaries, called the theater "your Poets' Royal Exchange," wherein "your groundling and gallery commoner buys his sport by the penny, and . . . is glad to utter it again by retailing." With a pun on "retelling," Dekker was mainly referring to the playhouse's function as a disseminator of new words and phrases. But English playgoers, willy nilly, were also buying new ideas, and the vicarious experience of open debate. That's a pretty good deal for a penny.

Posted by Grace Tiffany at 6:21 AM