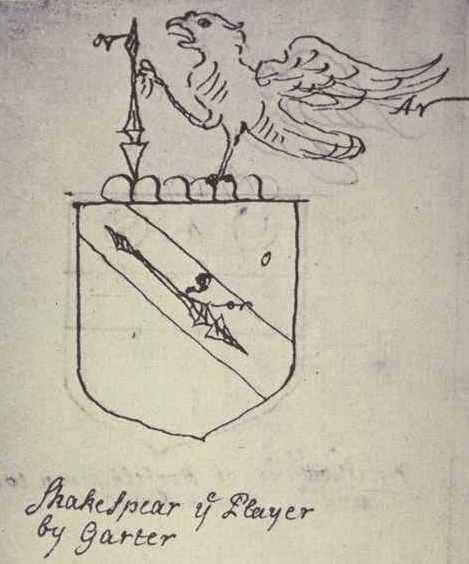 Hosts of BBC television programs about Shakespeare love to list words Shakespeare supposedly made up ("assassinate," "accommodation," "lonely," etc.). Sometimes these lists only show us that someone has not consulted his Oxford English Dictionary, because many of the "new" coinages actually appeared before Shakespeare used them. Likewise, many proverbs for which Shakespeare gets credit have the distinct ring of general use, like "He who is giddy thinks the world turns 'round," which is said by a snide bride in The Taming of the Shrew.  Probably the only reason we know this saying, or that some of us do, is that Shakespeare stuck it into a soon-to-be-famous scene, but it sure sounds like it was a common proverb. And it's a pretty good one, except for the fact that the world actually does turn 'round, so he who is giddy would be right, at least in this instance -- though most Elizabethans
were geocentrists (my new word), so Shakespeare very likely didn't mean this meaning, but rather the very mean meaning that Kate the Former Shrew accuses the snide bride of meaning. (You'll just have to read the last scene of Shrew to make sense of all that, if you care.)

Anyway! Though Shakespeare is given too much credit for phrase-and-word coinage (and probably for other things as well), the fact is that he did make up many words, and that in doing so he was acting in accord with the inventive, word-mad spirit of his age. In the late sixteenth century new English words were being made up all the time, mostly by playwrights, who gave them to their characters, whose actors spoke them in the public theaters and were heard by audiences who remembered them and went out into the streets and made them popular, and the language got bigger and bigger and bigger and became -- bigger.

Shakespeare participated with great enjoyment (I assume) in this neological trend, but also mocked it. Consider the too-often-cut-from-performance exchange between Hamlet and the servant Osric, who comes grandiosely, full of "golden words," to deliver Laertes' challenge to Hamlet in the last scene of their play. After Osric delivers his excessively syllabic, barely comprehensible message, Hamlet responds in kind with his own speech of artfully tortured syntax and contrived diction, leaving the baffled Osric to say only "Sir? . . . " (meaning "Huh?"). Also, in Twelfth Night, the poor dimwitted knight Sir Andrew Aguecheek trails the clever Viola (who's disguised as "Cesario"), trying to poach some nifty words to use when talking to the ladies. In Trevor Nunn's brilliant 1996 film, Sir Andrew is chasing Viola and scribbling down her words in a notebook. "'Odors,' 'pregnant,' and 'vouchsafed'," he mutters. "I'll get 'em all three ready."

This is gentle mockery of the word-coinage craze. Shakespeare's rival Ben Jonson was harsher (and funnier). In Jonson's 1601 Poetaster, produced within two years of Shakespeare's Twelfth Night and Hamlet, Jonson's character Crispinus, meant to stand for another rival playwright, John Marston, is made to vomit up on stage his own allegedly invented words. "Retrograde! . . . reciprocal! . . Incubus . . . glibbery . . . defunct . . . spurious . . . clumsy . . . furibund!," he splutters. I wonder whether some of these words stayed in English only because Jonson gave them comic currency in Poetaster.

Shakespeare's interest in new coinages was not restricted to words. He also liked to make up names. Usually, like those of other authors of his time, his names gave special clues to the nature and experience of characters. But over time, as with so much in Shakespeare, these names became removed from their original dramatic contexts. In England especially, many were, and are, popularly used as names for real children. Often their Shakespearean origins are forgotten.

And thus it comes that your name may have been invented by Shakespeare. You should think about this. For example:

Is your name Jessica? Shakespeare invented your name! Jessica is Shylock's daughter in The Merchant of Venice. What does her name mean? Scholars have offered several opinions. She is a Jewish maiden, and her name suggests an older one from the Pentateuch; she is of the "seed of Jesse," a Biblical patriarch. There is also a maiden named "Iscah," Abraham's niece, who is mentioned in Genesis; her name means, "She who looks out." Jessica's father famously cautions her not to look out the window at "Christian fools with varnished faces" (it's Carnival time), but she disobeys him and not only looks but climbs out the window to elope with her Christian lover. Finally, the first part of Jessica's name suggests "jess," or the strap that bound a falcon to its owner's wrist. The falcon is Shakespeare's favorite metaphor for women (next to the horse -- don't ask), and Jessica is indeed a caged bird, until she escapes, whereupon another character says of her, "The bird is fledged."

Is your name Perdita? Shakespeare invented your name! Perdita, whose name means "lost," is the missing child in The Winter's Tale. Abandoned on a hillside by a man who gets pursued by a bear, she is taken up and raised by a lowly shepherd -- though not so lowly once he pockets the gold that's been left in Perdita's basket --  and in the end she is restored to her true parents, fulfilling an oracle that predicts happiness to their kingdom when "what is lost is found."

Is your name Miranda? Shakespeare invented your name! Miranda is Prospero's daughter, exiled with him on the magic island in The Tempest. Her name means something like "really worth looking at," with which the smitten Prince Ferdinand would agree, as he says to her, "O, you wonder!" But the truly wondering one is Miranda herself, in the last scene of the play, when all the shipwrecked men show up on stage. Before then, she's only ever seen her father, Caliban, and Ferdinand. "O brave new world, that has such creatures in it!," she says admiringly. Ferdinand, keep an eye on that girl!

Is your name Othello? Shakespeare invented your name! But not your story, or rather, not Othello's story. That, Shakespeare took from an Italian tale by an author named Cinthio. But Cinthio named his protagonist simply "The Moor." In Othello, though lots of people reductively address or describe Othello as just "the Moor," he's got a name, and that name has a couple of "O"'s in it. Those vowels are there partly so there can be a lot of moaning at the end, wherein the long "Othello" o's get merged with Othello's "O, o, o!" and his "O Desdemon! Dead, Desdemon! Dead! O, O!," which for some reason Shakespeare thought was good writing. This, DesdeMOANa's death scene, is a difficult one to play without melodrama, I must say, even though it contains some of the best lines in Shakespeare ("O, she was false as water," and "Let it go, all"). What else can I say? Why did your parents name you "Othello"?

Is your name Sir Amorous La-Foole? Shakespeare did not invent your name. That honor goes to the above-mentioned Ben Jonson, who was way ahead of Restoration and eighteenth-century playwrights in his naming of characters to signify ridiculous social types. Sir Amorous La-Foole wears a many-colored fashionable coat that mainly suggests that, unwittingly, he's dressed himself in motley. He even has a motley coat of arms (purchased, of course, not inherited). He's a social climber, and he's a fool. And he's amorous. And he's funny, but more to laugh at than with. Change your name.

Is your name Ariel? Shakespeare brought your name into wider use! "Ariel" is Hebrew for "Lion of God." In Jewish tradition it has a Biblical derivation and is generally reserved for males. But "Ariel" in Latin America is used for men and women, mostly because of Shakespeare's The Tempest by way of Jose Enrique Rodo's Ariel (1900). Rodo's book re-imagined the colonial encounter between Spanish conquistadors and native American inhabitants by evoking the interaction between Shakespeare's Prospero and the magic spirit Ariel. The name caught on. Consequently I have a female Haitian friend named Ariel, and have read a memoir by the male Chilean author Ariel Dorfman. Of course, most of my students know "Ariel" from The Little Mermaid and think the name was invented by Walt Disney. A fine declension: God, Shakespeare, Walt Disney Corporation.

Is your name Justice Shallow? Shakespeare invented your name! Justice Shallow appears in two plays, Henry IV, part 2 and The Merry Wives of Windsor. He's really not such an admirable character in either one. He's really somewhat . . . I don't know, shallow. In Merry Wives, he cares more about money than about justice, and in Henry IV, part 2, he cares more about dinner than about justice. But he's relatively harmless in both plays, and has the honor of being the addressee of Falstaff's famous line, "We have heard the chimes at midnight, Master Shallow." Try to get people to say that to you.

Is your name Florizel? Shakespeare invented your name! Change it.

Is your name "Discontent"? Shakespeare invented your name! Change it.

Is your name "Addiction"? Shakespeare invented your name! Change it.

Shakespeare liked names so much that, while he couldn't invent his own name, he made sure to goof around with it a lot in his poetry. His first name, "Will," is roundly exploited in his Sonnet 135, where it's made to signify not just purposeful desire but a certain sexual organ which some English people still call a "willie." As for "Shakespeare," check out Prospero's long speech towards the end of The Tempest, where Prospero -- who stands for, among other things, the playwright -- abjures his "rough magic," but first lists his wizardly accomplishments: the earth (or Globe) "have I made shake, and by the spurs pluck'd up / The pine and cedar." Even for the coat of arms which Shakespeare bought (and didn't inherit), he chose for the crest a falcon holding and perhaps shaking a spear -- although to modern eyes, that spear looks remarkably like a pen. (Check out the original sketch for the crest, above right.)

By the way, if your name is Prospero, Shakespeare invented your name.  It's an awe-inspiring name. Live long, and keep it.