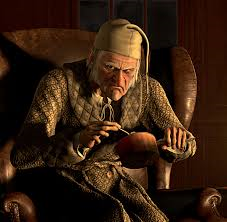 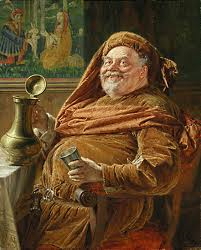 
Here’s why. First, the Victorians were mad about Shakespeare. You can’t read a Victorian poem or novel without stumbling over a reference to a Shakespeare character. (A slight exaggeration, but only a slight one.) Second, the ground for a Dickens-Shakespeare comparison is laid (or dug, ha ha!) by the appearance of Marley’s ghost come from the grave, who, clanking his chains, complaining about his otherworldly punishments, and charging a still-living associate with an important duty, eerily brings to mind the Ghost of Old Hamlet. As my last week's riddle disclosed, Hamlet's Ghost is, like

Marley's, closely associated with Christmastime, though Old Hamlet’s relation to the holiday may be an inverse one. I discussed Marcellus’s claim, just after Old Hamlet’s ghost disappears at dawn, that during the Christmas season “no spirit dare stir abroad.” Dickens apparently decided that the opposite was true:  that Christmas was a good time for a restless Shakespearean spirit to show up with a spectral retinue and frighten the bejesus into an old sinner named Scrooge.


Fine, you say. The Victorians loved Shakespeare, and Dickens and his readers could not have read the description of Marley’s ghost without thinking about the Ghost of ‘Hamlet.’ "Marcellus" even sounds a little bit like "Marley" (you say.) But Scrooge as Falstaff? That’s too much of a stretch.

I say not. Not when you consider that beneath Falstaff’s witty demands for carnal pleasure runs the nagging voice of conscience, telling him to change his ways. He flees that voice, which tells him he’s aging and must, like the prodigal, repent before it’s too late. “What time . . . is it?” is his very first line. “I must give over this life, and I will give it over,” he says (Henry IV, part 1, 1.2). “I shall be out of heart shortly, and then I shall have no strength to repent,” he worriedly tells his page later on (3.3). He never does forsake his cold, greedy ways, and dies shouting “God, God, God!,” while his landlady tells him, falsely, that there’s “no need to trouble himself with any such thoughts yet” (Henry V 1.3).


What has been Falstaff’s vice? Not his gluttonous love of “sack and sugar,” a mere comic, venial sin. Consider instead his chilling disregard for the welfare of the poor troop of men he leads to the Battle of Shrewsbury. He enables the rich to purchase their freedom from military service, then impresses those who lack means to refuse: “discarded . . . servingmen, younger sons to younger brothers,” “ostlers trade-fall’n,” walking “scarecrows.” To Falstaff these are not men but cannon fodder, “food for powder, food for powder” (Henry IV, part 1, 4.2). And Falstaff is as good as Scrooge at keeping accounts. He’s received “in exchange of a hundred and fifty soldiers” (those who paid him off) “three hundred and odd pounds.” It’s no wonder that when Prince Hal picks Falstaff’s pocket he finds in it only an expense sheet with a list of prices (“Item . . . 2.s. 2.d,” “Item . . . 5s. 8.d,” etc.). Money means something to him. The poor? Not so much. This is why in the play he's repeatedly compared to Dives, from the Biblical parable of Dives and Lazarus. Dives (literally "rich man") not only lives it up all his life, but shows complete indifference to the sufferings of the beggar Lazarus at his gate.


Still not convinced Falstaff is Scrooge? Not even though Falstaff's friend Pistol announces, in Henry IV, part 2, that the king is "dead as nail in door," a line echoed in A Christmas Carol's opening description of Scrooge's partner Marley, now "dead as a doornail"? Okay. Then consider the portly knight’s curt rejoinder to a man who plucks his sleeve earlier in that play: “What? A young knave, and begging? Is there not wars? Is there not employment?” In this same scene, when the Lord Chief Justice tries to convince proud Falstaff to act his age, and to cultivate an “effect of gravity,” Falstaff – thinking, as always, about food -- makes light of this suggestion. “[The] effect of gravy, gravy, gravy!” he quips. Dickens must have been considering Falstaff’s situation when he had Scrooge callously dismiss the concerns of the poor -- “Are there no prisons? Are there no workhouses?” -- and laugh off the idea of a supernatural otherworld in which his mercenary habits would be judged and punished.  Marley, first spokesman for that world, is to Scrooge just a hallucination, a symptom of indigestion. “There’s more gravy than grave about you,” Scrooge says. Gravy, gravy, gravy.


Dickens is kinder to Scrooge than was Shakespeare to Falstaff. In the end, Scrooge comes to see the looming grave as his future, not as gravy, and uses that frightening vision to make himself a better man. As for Falstaff, he dies babbling about the devil and hell, according to the garbled reports of his "friends."


Some disagree with my dire conclusion about Falstaff’s fate. Matthew Fike has argued that Falstaff actually repents at the last minute. (See Fike’s “Dives and Lazarus in The Henriad,” Renascence 55:4 [Summer, 2003]: 279-91.) And whether Falstaff ever sees the light or not, it’s a fact that Shakespeare gave him an alternate life in the hilarious The Merry Wives of Windsor, to chase more women and guzzle more sack. Perhaps Falstaff, unlike Scrooge, was funny enough to bypass hellfire, and sing, like Twelfth Night’s Sir Toby Belch (whom he resembles), “I will never die.”
Twelfth Night brings us back to the beginning, since January sixth  is Kings Day, the Feast of the Epiphany, and, as I mentioned above, the last day of Christmas. Everything is connected. A friend of mine named Bruce Barr used to say there was a Grateful Dead line for every occasion. I say there’s a Shakespeare reference for every occasion. I don’t know how to end this blog-post, so I’m just stopping. Happy New Year!
Posted by Grace Tiffany at 6:00 AM