Did Shakespeare Write Everyone Else's Plays?


EVERYONE AND NO ONE:  A Story

At twenty-something he went off to London. Instinctively, he had already trained himself to the habit of feigning that he was somebody . . . .

-- Jorge Luis Borges, “Everything and Nothing” 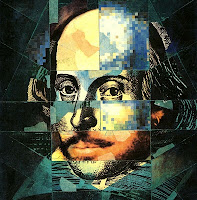 The town was an ocean of faces and noise. He stood in the , a pack on his back, confounded, and thought, I am a drop in the surrounding sea. Anonymity was new to him, but this mental habit was old, inescapable, and often unconscious: the instinctive apprehension of real things by means, and only by means, of metaphor. The sun was never the sun, but a hot wench in scarlet taffeta. The moon? A loon’s mournful wail. Thus his mind was made, or mismade. Yet what in had made him conspicuous, peculiar, and strangely wanting could profit him in . He’d come to the place where the word-merchants were, to make a virtue of necessity.
He translated himself, at first to a player named Shakspere. Yet soon
enough he found the stage no sufficient platform for his imagination. Grounded on its boards, scuffing the hard, splintery wood with his boots, he felt cribbed and confined to a sameness, despite the variety of roles he was given to play. He yelled and waved a wooden sword as an English soldier, hobbled as a doddering, cane-clutching senex, raised his eyes prayerfully heavenward as a wimpled nun. Always, disappointed, he sensed his own body under his costume, and cursed it for betraying, in its singleness, the multitudinous vagaries of his fancy. In his most-preferred roles, he sat as a king, his limbs briefly at rest and unassertive, his mind unfolding in rich, regal speech, his head at ease under its crown of tin. A ruler, godlike, able through words to make, unmake, and remake. Yet even at such times, much as he inwardly begged his audience to grant authenticity to his King Cambises -- to him, King Cambises -- he could sense that they held something back. They saw not just the part but the actor who played it. He was a king and no king.
He took, then, to writing plays, and to being various playwrights. Through his pen and their assumed identities he sailed forth to explore an infinite set of universes. The name “Shake-spear” did well, in its way, in the image it birthed of a quill held high and brandished like a lance. But one author’s name was not enough. All names bore promise, were poetic expressions of ideas, or rather, were trees of unfolding ideas (the paper like leaves, the leaves like paper). To start, he chose “Chapman”: a journeyman, a seller of trifles, a caterer to tastes in tongues and trinkets. As Chapman he wrote a light comedy in the Italian style, a city comedy, replete with laughable confusions precipitated by clever servants, flat characters stolen from other men’s plays. (Years later, to maintain the consistency of Chapman’s character as a plagiarist, he posed again as Chapman to write a tragedy in slavish imitation of Hamlet, a play he’d written as Shake-spear.) In those early days he also fashioned “Mar-lowe,” because “mar” meant “ocean” in the Romance tongues, and suggested to him the infinite sea in which he himself swam: a flood of ambition, a broad main, and a hero awash in it, propelling himself upward to success, then sinking low to the depths, destroyed, only to be sea-changed and reborn in the next play. This kind of hero, embryonic in its author’s pregnant pseudonym, was a different, more brazen character than might be made by “Shake-spear,” that name so ironically self-aware, so cognizant of the fictive, literary quality of the man who possessed it. As Marlowe, then, he birthed the doomed King Edward the Second, the hell-bound Doctor Faustus, and the rapacious and death-marked Tamburlaine.
Of course, all this time he continued to write as Shake-spear. From Shake-spear’s sharp quill leapt, like fire, the humpbacked monster Richard the Third, the furious wordsmith Kate the Curst, and the tragic alien moneylender, Shylock. And one night, borne by some nameless wind of inspiration, Shake-spear fashioned two star-crossed lovers named Romeo and Juliet. Then he gave them an accessory, a character named Mercutio, a youth driven to the brink of madness by poetry. A sword-wielding wit.
And from this Mercutio, he took an idea. Until the day audiences granted that the things they saw on the stage were no more false than anything in the world outside the playhouse walls, until that day, he might gain the drug of their utter credulity by playing in the street those authorial roles he had fashioned in fancy. Thus, merging his dreamed author and dreamed character, combining his Marlowe with his Mercutio, he ventured, disguised, now and again into taverns and alehouses as a witty and scandalous imp, uttering blasphemies, declaring a vaunting and boundless ambition. When he tired of the role, he enacted his own death in a tavern brawl, seeming in front of several shocked spectators to drive into his eye a dagger that was actually retractable and stolen from the Rose theater.

Posted by Grace Tiffany at 9:40 PM