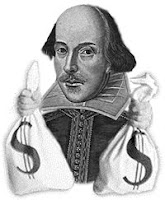 Have you checked out these suits who are making a killing marketing "corporate" Shakespeare? To be accurate, some business types are only trying to cash in, while some actually are profiting, big time. Google "Shakespeare in business" and you'll find a slew of "Get rich the Shakespeare way" books, including Paul Corrigan's Shakespeare on Management and Jay Shafritz's no less (or more) originally titled Shakespeare on Management. (Book description: "William Shakespeare's vast and important contributions to literature have long been acknowledged, but his shrewd insights into business and management have been all but ignored -- until now.") Even some folks with an actual interest in theater are sucking up to the corporations, a trend which, hilariously spoofed in one episode of the Canadian TV series Slings and Arrows, turns out to be perversely real. The Nashville Shakespeare Festival now offers "Business Workshops for Professional Development" ("Making your world a stage, all year round!"). If you want to spend the rest of your day in a state of shock and depression, watch their promotional video:  http://www.nashvilleshakes.org/BusinessWorkshops.htm.

No one can deny that Shakespeare himself was a shrewd businessman. He knew enough to buy stock in his own theater company, the most successful in England,
when it was still fairly new, and -- less ethically -- to hoard grain and watch the price rise during a lean agricultural year. In his creative life, he catered to popular London tastes for knockabout Plautine comedies (one or two), revenge plays, and, towards the end, fantastic romances. But few of our Shakespeare business capitalists have much to say about Shakespeare's actual financial practices. Instead, they want to do what so many do, inside the academy and out of it: shrink the plays into vehicles conveying a narrow set of pre-chosen principles, which in their case are business ones. The Nashville video shows business workshop facilitators inviting participants to choose and justify either Brutus's or Cassius's confrontational style. A little context, please! Are you plotting an assassination? What about considering that major moral issue before applying Julius Caesar's dialogue to office budget decisions? I know why. Because that would require suspending our own list of tiny goals and actually listening to what a play has to say.

Worst at doing that, and best at making money off Shakespeare, are the king and queen of Shakespeare business workshops, Ken and Carol Adelman. The Washington Post's Thomas Heath identifies the Adelmans as one of D.C.'s "quintessential power couples," noting their former positions with, respectively, the U.N. and the U.S. Agency for International Development and calling them true "Washington wags" ("Value Added: They teach business lessons, courtesy of the Bard," April 7, 2013). For each of their workshops the Adelmans charge "travel expenses plus $28,000," and they keep a second home in Aspen which they call "the house that Shakespeare built." So successful are they at snaring gigs for corporate pep talks that they've been featured prominently on the Wharton business school website. "They pay us to teach leadership," says Ken. "They don't pay us to teach Shakespeare." It's good they don't. You thought Hamlet's "'to be or not to be" speech was a philosophical meditation on the paralysis induced by too much thought, with specific reference to Hamlet's own fraught and dangerous situation? Actually, the speech provides a general "lesson in crisis management," like what to do when the Dunder and Mifflin paper shredder shorts out. Julius Caesar is "a case study in how to execute a takeover." So someone is plotting an assassination. What's Henry IV about? The aura of kingship? The politics of performance? The lingering stain of regicide, and the imaginative construction of history? Nope. It's about "family businesses trying to pass the enterprise on to the next generation." I'm surprised they didn't pick King Lear for that lesson, but maybe they haven't read it. After all, as Carol Adelman says, "Shakespeare was not meant to be read." This would have been news to Shakespeare, who with his fellow actors sold plays for printing within two years of their first production, fostering a readership in order to keep interest in older plays alive (see Lukas Erne, "Shakespeare and the Publication of His Plays," The Shakespeare Quarterly 53:1 [Spring, 2002: 1-20] ). Carol's comment would have especially irked Shakespeare's friends and fellow players John Heming and Henry Condell, who printed all his plays in folio in 1623 with the instruction "Read him . . . again and again." But, again, the Adelmans aren't paid to teach Shakespeare -- or theater history.

While Hamlet, Julius Caesar, and Henry IV appear to provide excellent business-plan models, the centerpiece of the Adelmans' Shakespeare management shtick is Henry V. I've been disturbed about the uses to which this play gets put since I read that U.S. soldiers were issued copies of it during the First Gulf War, and so it was with dread that I turned, on the Internet, to David L. Perry's "Using Shakespeare's Henry V To Teach Just-War Principles," a plan for a course sponsored by the Department of Command, Leadership, and Management at the U.S. Army War College in Carlisle, Pennsylvania. Seeking some background in the ways this play is misread by rabid military or capitalist aggressors, I was expecting a course description obsessively focused on Henry's militant speeches, or maybe a semester-long class organized around the phrase "band of brothers." I was surprised instead to find an intelligent, thoughtful analysis of the ways the whole play challenges imperialist endeavors. Perry (now at Davidson College) led his War College students in a study of how King Henry is persuaded to invade France by corrupt counselors who stand to benefit from the campaign. Once there, he sophistically blames his own soldiers' threatened violence against civilians on the foolish stubborness of a town that won't surrender. Later, challenged by an angry private's charge that he leads innocent, choiceless men to their deaths for an unknown cause, Henry responds with the flimsy argument that a king is no more to blame for his soldiers' deaths in battle than a father is when his son, sent on a mercantile errand, sinks at sea. Deaths happen. Yeah, but they happen more often on battlefields! Henry flounders here, and his heroism is further compromised when, in a defensive move, he orders his unarmed French prisoners slaughtered. At the play's end, Shakespeare's Chorus reveals that all the territory Henry gained in France was lost in the next generation. Promoting a careful reading of all parts of the play, David Perry shows students that Henry V calls into serious question the ringing rhetoric with which its protagonist masks a morally dubious military takeover.

Someone needs to put the Wharton business school in touch with the U. S. Army War College. They're in the same state, but not on the same page. While Perry's paper reveals Henry as "radically ambiguous" (to use Stephen Greenblatt's phrase), Wharton's website touting the Adelmans' seminars speaks of this complicated king in entirely glowing terms. Take the way Henry won the Battle of Agincourt. "He stopped his army on a field that was flanked on either side by woodlands, thus forcing the French army to move forward through a narrow funnel and neutralizing their superior numbers. He took full advantage of a rainfall that had muddied the battlefield . . . when they slipped backwards wearing their 60-pound armor, they couldn't hoist themselves back up; when they fell forward, they drowned in the mud." They were sitting ducks for the English longbowmen. Staging the details of the slaughter of mud-trapped men would have yielded a Henry too unambigously unchivalrous even for Shakespeare, but for the Adelmans, these ugly historical details only enhance the business lessons. (Geez, why did Shakespeare leave them out?) They point out that "Henry was willing to innovate, recognizing, for example, the superiority of the long bow," which enabled the English to sustain losses of only 450 men against 6,000 French casualties. Bottom line? Do it Henry's way. Shoot your competitors (or maybe your customers) as they lie drowning in the mud. But first yell, "Band of brothers!" This business philosophy is promoted, I say again, in a 2010 post on the Wharton school of business website. Check it out if you don't believe me: http://knowledge.wharton.upenn.edu/article.cfm?articleid=2612.

Of course, the real reason the Adelmans' Shakespeare lessons bother me is that I'm jealous. I've been teaching and writing about Shakespeare for twenty-five years, and I still don't have a house in Aspen. This must change. To that end I've developed my own "Shakespeare in Business" pilot course, which I hope to offer at my institution, Western Michigan University. Seeking partnership, funding, and some leads for interdisciplinary team-teaching, I recently approached a friend from the business college and asked him if he could give me the name of one of his colleagues who was really interested in great literature. After he stopped laughing, he said, "Try the law school."  We don't have a law school yet at WMU, but I'm not daunted. If the business school won't have me, I'll just make my little corner of the English department into a business school, with a special-topics course that will surely garner departmental support and stir the enthusiasm of undergraduates in quest of marketable skill sets. Here's my course plan.

Choke me with an argosy: selling your daughter to the highest bidder. Following The Taming of the Shrew's Baptista, male students will learn debating techniques designed to maximize seller-advantage on the feminine-offspring marriage mart. (Secondary reading: Exodus 20:17.)

"From this time forth I never will speak word": Recognizing and promoting talent in subordinates before all hell breaks loose. Why tempt fate, like Othello? Instead, employ Best Practices. Shakespeare shows that a leader's failure to reward a proven service record leads to undesirable business outcomes. Workers with insufficient top-down encouragement may choose, like Iago, to drive you, the boss, insane, and also to murder selected co-workers, without even telling you why. I'll tell you why. It's because you failed publicly to recognize and reward their talents.

Don't sign silly contracts. An in-depth study of The Merchant of Venice's plot teaches students not to pledge body parts in exchange for short-term loans. The instructor will also lead a discussion of interest rates: what levels are extortionary? How do we, like Antonio, risk negative profit margins when we simply give money away? Also to be addressed are the perils of over-diversifying. Trade ventures to Tripolis, the Indies, Mexico, and England? That's just asking for trouble.

I'm still working on my syllabus, and am open to suggestions. Rest assured that students will not be required actually to read any plays, only my outlines, and that these will avoid all radical ambiguities and troubling moral questions (e.g., is irrational jealousy also unspeakable? How responsible are we for our acts of passion?), textual ironies (might bride-bartering engender feminine anger and covert rebellion?), and metaphorical considerations (what does it mean to pledge your whole heart to a friend)? Needless to say, David L. Perry will not be invited as guest speaker. The Adelmans would be, but I can't afford their fee.
Posted by Grace Tiffany at 9:17 PM