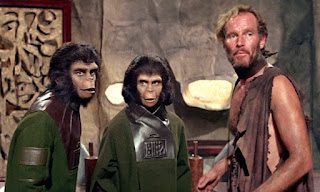 Let's talk about the minor characters in Shakespeare. I mean the really minor characters, those whose parts are so small, some of them don't even have names. Not that namelessness is necessarily equivalent to minor character status. Hamlet''s Gravedigger has one scene, but he's not a small character. Henry V's "Boy" is not a minor character, nor is the Porter in Macbeth. And then we have the named characters whom we rarely think of when we refer to the plays, but who nevertheless are crucial to the action. As You Like It’s Silvius, Henry IV's Bardolph, and A Midsummer Night's Dream's Peter Quince are major characters. Macbeth's Ross is a secondary character, but one so significant that in Joel Coen's recent adaptation of the play, he takes over the whole script (being outplayed only by Banquo's eyebrows).

So, what characters am I talking about? Ones most people don't even know exist, so microscopic is their presence in the play. Yet, like many trace elements, these characters are catalysts for the action, or for the illumination of some larger character or theme.

Adrian (The Tempest): Okay, Adrian is an exception to all that. He's been called, and is, the most boring character in Shakespeare. This servant of King Alonso exists only to be made fun of by snide Antonio (the hero Prospero's villainous

brother) and his sidekick Sebastian in the first scene of act two. That's a purpose, sure, but Antonio and Sebastian already have enough food for mockery in good old Gonzalo, the main butt of their humor in this scene. Adrian is the young "cock'rel," in contrast to Gonzalo, the "old cock," and what he does is say a couple of lines admiring the island landscape and then fall asleep. I include him here only because the degree to which he is a nonentity is remarkable. Perhaps Shakespeare promised somebody a part.

Seyton (Macbeth): Now, Seyton is interesting. Why? Because his name is pronounced "Sa-TAN!" (Picture Dana Carvey saying this as a shrieking Church Lady.) Seyton is Macbeth's servant, but, interestingly, he doesn't show up til act 5, wherein he plays an important role. "Enter Seyton," in response to Macbeth's call: "Sa-TAN!" (OK, he usually doesn't say it like that. But I did once hear an unusually comic Macbeth in Chicago do it this way.) Macbeth calls him right after he has resigned himself to the loss of all the things a good king has -- "honor, love, obedience, troops of friends" -- because he's not a good king. Then he calls out, "Seyton!," and asks for his armor so he can go out and kill more people. In a subsequent scene, Seyton is the one who plunges Macbeth further into despair -- or dark resignation -- by reporting the death of his wife. And then, having done his devilish job, he disappears. Coen gave Seyton's lines to Ross. But they belong to Seyton.

Emilia (The Winter’s Tale): No, not that Emilia. Not Desdemona's waiting-woman in Othello. That one's a major character. This one is so minor you may never have noticed her. Who is she? A loyal servant of maligned, jailed Queen Hermione; a minor lady who facilitates the more famous and heroic Paulina's errand of mercy to the queen and her newborn daughter. Shakespeare's late plays, among them The Winter's Tale, revisit his tragic plots and change them, making sympathetic characters more powerful, as well as altering the plays' timing so that wounds heal, or tragic actions fail of their effect. In this play, written some six years after Othello, Shakespeare allows this Emilia a power he denied his first one. This one escapes manipulation by a devious husband, outspokenly defends her mistress against the false charge of adultery, and doesn't die in the process.

Cornelius and Voltemand (Hamlet): How strange, that when we already had Rosencrantz and Guildenstern, we also needed Cornelius and Voltemand. Who are they, except for pale reflections of the already sad R & G? Like the more famous pair, these Danish courtiers go everywhere together. (Since a famous modern Cornelius is the ape from Planet of the Apes, it would be interesting and enjoyable to have them played as twin apes.) Voltemand gets all the dialogue. Claudius asks him, "Say, Voltemand, what from our brother Norway?," and gets a 16-line answer: Norway's fine, he's controlling Fortinbras. What is Cornelius for? Why does he even have to be there? He's like the shadow of a shadow of a shadow. And then they're both gone. It seems that there need to be two of everyone in this play. Old Hamlet and Old Fortinbras, Rosencrantz and Guildenstern, two gravediggers, etc. It's like a hall of mirrors. Speaking of character pairs, notice how we start with castle guards Barnardo and Francisco, but then Francisco gets  kicked out of the action to be replaced by Marcellus, and from then on Marcellus, Horatio, and Hamlet are the "in" group who gets information about the Ghost. Why don't they trust Francisco? Why does he have a Spanish name? All of this is to say -- sometimes Shakespeare just seems to be messing with us.

The Clown (Othello): Did you know there was a Clown in Othello? There is, he's just not funny at all. In a very weird scene, he shows up to dismiss some musicians whom the depressed and demoted ex-lieutenant Cassio has for some reason hired to play outside the citadel where Desdemona lodges. The Clown puts a stop to it right quick, with a few lewd jokes and insults toward the musicians, whereupon Cassio says, oh, all right, no music. And that's it. The musicians and the Clown exit. Why? I don't even know why I'm including this Clown in this list, except that he has always stuck in my mind ever since I read a very famous Shakespeare scholar's observation about him: "The Clown has no discernible function, and yet the play is not quite the same without him." Someday I'll do a post on the most meaningless comments ever made in Shakespeare criticism.

Old Man (King Lear): Every once in a while you spot an Old Man wandering around a tragedy. There's one in Macbeth. It's good to pay attention to them; they're usually pretty wise. The Old Man in King Lear is not only wise, but kind and helpful, and he's important because he stands for a world of simple good people in the play who might otherwise be obscured by the spectacle of depraved aristocrats. Old Man is kind of like First Servant, who has no name but sacrifices his life in an attempt to keep another old man (Gloucester) from being tortured. Old Man appears in the very next scene to describe himself to now-blind Gloucester as "your tenant, and your father's tenant, / These fourscore years." Like First Servant, Old Man does his best to try to help and solace the wounded Gloucester, and delivers him into caring hands. The world of King Lear is bleak, but not without humanity.

Mouldy (Henry IV, part 2): Some of these micro-characters are great because of the opportunities their dialogue gives the actor. They may not get much to say, but sometimes one line, properly delivered, is worth a thousand, in its ability to express an idea of growing power in the entire play, or in this case, trilogy. Mouldy is one of the poor country yokels impressed by Falstaff to march off to the king's wars. In the first part of Henry IV, Falstaff has callously described these men as "food for powder, food for powder." Here, we see close up the human beings he regards so unfeelingly, collecting only as many "scarecrows" as will fill his muster. Drafting the men, Falstaff makes a joke about this one's name: "Mouldy, it is time you were spent." Mouldy gets a one-word reply: "Spent?" The actor playing him in The Hollow Crown, the recent TV adaptation of the history plays, delivered the syllable magnificently. His disgust and contempt for the proceedings were evident on his face, and he hissed out the word: "Spent?!?" So, that's what a human life is for? To be spent for the power-disputes of our social betters? He even brought a little shamefacedness to the shameless Falstaff (for a moment).

Barnardine (Measure for Measure): Barnardine is a paradox. He's a character who's so funny, he messes up the comedy. In this play's complicated plot, a rather inept disguised duke is trying to manipulate the action so that the heroine Isabella thinks her brother has been executed, but then it will turn out, Surprise, that's not his decapitated head, it belongs to that of the notorious death-sentenced murderer Barnardine! OK, hilarious, but the problem is, Barnardine doesn't feel like getting executed today. "I have been drinking hard all night." He's got a hangover; he's not in the mood. And everyone -- the Duke, the jailer, the judge -- just shrugs his shoulders and goes looking for a pirate or some other lowlife whose head they can chop off instead, which delays the comic action about two scenes. But they do get their head by act five. So funny! Barnardine is instrumental in underscoring how very screwed-up this Venetian culture is, and darkening a comedy to the point of bizarreness. Who said Ionesco invented Absurdism?

Servant Boy (The Taming of the Shrew): This famous comedy is a play within a play, performed for a drunk who's been pranked into thinking he's watching it with his "wife." His "wife" is a servant youth who's been asked to dress up as a woman for his master's (the prankster's) entertainment. This boy's entire part consists of evading the drunkard's amorous advances and telling him to pay attention to the play. But his role provides an interesting metatheatrical introduction to the fact that all the "women" in the play proper, including, most importantly, Kate the "shrew," are not women at all, but boys dressed up to play women. The marital taming plot emerges finally as a kind of fantasy, largely thanks to this transvestite boy.

William (The Merry Wives of Windsor): This William is the son of one of the play's two heroines, and he plays a very minor role in the action, but we should take note of him because of his name. William Shakespeare never met a pun he didn't like, and one of his favorite puns was the word "will," which could mean all kinds of things, including bawdy things, but in this case seems to mean, "childhood version of myself who struggled with Latin." The first scene of the fourth act of this play "pauses" the action for a sustained dialogue in which young William is quizzed in Latin, and every one of his answers, right or wrong, is an occasion for a dirty joke. This, it seems, is how schoolboy Shakespeare and his friends got through their Latin lessons. Some schoolboys never entirely grow up.