"Speak of me as I am": Shakespeare and the New Orthodoxy 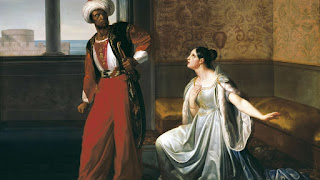 In the fall of 2021, distinguished Chinese-American composer Bright Sheng committed what should have been regarded as a simple academic faux pas. In an introductory music class at the University of Michigan, where he teaches, he showed the famous 1965 film of Othello starring Sir Laurence Olivier in the title role. Sheng's purpose was to introduce his students to the play as groundwork for discussion of Verdi's operatic adaptation of the tragedy. However, they never got to Verdi. His freshmen may not have recognized Othello or Olivier, but they knew a white man in blackface when they saw one. Sheng hadn't provided any contextual discussion of this facet of the film (or none the students noticed). After class, a group of them expressed their shock, horror, and pain, not to Sheng, but to the higher authorities of the music department. The "safety" they had expected to find in their college classrooms had been compromised by their instructor's gross display of racial insensitivity. The end result was an official apology to the students on the part of the school of performing arts and the removal of Sheng -- by "voluntary" agreement between him and the dean -- from his role as instructor of the class.

Well . . . maybe that wasn't the "end" result. Since this incident was first reported in a university newspaper article entirely sympathetic with the aggrieved students' viewpoint, over 700 Michigan faculty and students have written in protest against

the college's overreaction, and have demanded that Sheng be given an official apology. (He hasn't been.) It's hard to know what Sheng's private views of the incident are, corralled as he is by contemporary university protocols, which are mostly unwritten but no less real, and which strictly curtail what can and can't be said and shown regarding race. But part of the public record is Sheng's own formal apology for not having considered the hot-button effect (not his words) that any revelation of or reference to historic blackface has in contemporary American society.

Why could this faux pas not have been handled in the classroom, between Sheng and his students, without the university taking the radical step of shaming this world-famous composer, depriving his students of the benefit of his teaching, and fomenting an embarrassing scandal that was reported on by The Washington Post and The New York Times? Why, indeed? Sheng lived through China's Cultural Revolution, a period of ideological repression during which many students accused their professors of failures to live up to Communist ideals, precipitating severe professional humiliations and career- (and sometimes life-) ending punishments for the "guilty." Perhaps Sheng expected something different from an American university. Good luck with that, in 2021.

Sheng didn't improve his situation with his apology, because to it, to demonstrate that he was no racist, he added the information that he had cast performers of color in leading roles in past musical productions. This irritated the offended students. Why? Because, in the circular logic of what linguist John McWhorter calls "woke racism," if you are white (or Asian, or, in any case, not black), claiming not to be racist means you are racist and don't know it. Prevailing academic orthodoxy holds that only two kinds of non-black people exist in America: those who admit their racism and those who don't. Where does the racism come from? Being white. Against whom is the racism unchangeably and incessantly directed? People of color. So much for Martin Luther King's longed-for future when children would be judged "not by the color of their skin, but by the content of their character."

In today's university, race is the overriding topic of discussion in humanities classes and faculty colloquia, but the things that are allowable to say are carefully delimited. A typical "racial sensitivity" training instrument at a large university -- a compulsory on-line course for faculty -- describes a range of fraught situations, requiring the course-taking faculty member to choose from among a set of possible responses to each one. If he or she doesn't choose the "right" interpretation, the program will not let him or her proceed to the next question. Here's a fictional example that closely resembles the real ones: "A colleague reveals to you that he is teaching a Shakespeare play which contains several racially offensive epithets. He's concerned that these will embarrass the students of color in his class. You should: a.) suggest your colleague choose a different play, b.) suggest your colleague condemn the racial epithets and use them as an occasion to focus on early-modern racist stereotypes and their continuing presence in our culture, c.) suggest your colleague not draw attention to the lines, since, on their own, the students probably won't notice them, or d.) say nothing and let your colleague figure it out." Obviously, intelligent people can hold different opinions on these options, and can even suggest many additional options. But intelligence and dialogue are not called for here. The answer is "b." If the course-taker chooses a different answer, he or she gets a message reading, "Reconsider the options," and the command is repeated until the course-taker adjusts the answer to "b" in order to escape to the next screen, with its new slate of false "options."

What's the obvious result of this kind of intellectual coercion, so antithetical to the "critical thinking" most colleges profess to encourage? This: a bunch of faculty rotely choosing the "correct" answer (usually not too hard to figure out) so they can complete the assignment and be "in compliance," while inwardly seething, even if they agree with most of the "correct" answers, because they've figured out that they aren't being given any actual liberty of choice. Answers are mandated, and opinions policed. This general problem manifests itself in different ways at different places. In 2020, members of the law faculty at Northwestern University met ritually to stand, one by one, and confess and repent of their heretofore unconscious racist tendencies. A group of Princeton faculty proposed a committee to "oversee the investigation and discipline of racist behaviors, incidents, research, and publication" on the part of other faculty. Broad "guidelines" defining illicit "behaviors" and "research" would be developed by this committee, which would arrogate unto itself the defining of "racist." Such practices foster fear, not debate.

And, saddest of all, this sort of conversation-quelling fear is often found in the classroom. What the administration does to faculty, and what faculty do to themselves, many faculty do to students. We claim we are opening up conversations about difficult topics, like racial concerns in speech, behavior, and politics, but instead, we teach "correct" attitudes, and shut conversations down before they begin. Virtue signaling is as easy as it is boring. Reasoned debate is harder, for a lot of reasons.

Take Shakespeare's Othello. I've seen the looks of dread on the faces of my white students when I broach the topic of race in the play. Lively, talkative young people clam up, worried that they will say the wrong thing and offend a student of color. I've also seen the discomfort in students of color who, five minutes previously, were talking about restrictive fathers or Machiavellian frenemies or religious warfare or complex poetry or any one of a dozen things that struck them as interesting in the first act of this tragedy, but who now suddenly realize they have become, without them or me willing it, designated representatives of The Black Perspective.

I have found that the thing to do is to go on. Usually, if I keep asking questions, the ice gets broken, tongues loosen up, awkwardness subsides, and people again become themselves, not some race-based caricature of how they think others see them. Optimally, the class turns into an intellectual community, a group of students to whom color is part but not all of each person's self, with everyone investigating the same 400-year-old text, and often including in our study some discussion of an archaic, centuries-old, and, yes, racist theatrical tradition by which white men played Othello in blackface. I show pictures of Olivier in his stage paint ("What is that?"), and a clip of Anthony Hopkins in weird brown makeup, playing the role in 1981 ("Hannibal Lecter! No way!"). I tell them about Patrick Stewart's 1990 "photo negative" Othello, in which all characters except Othello and Bianca were played by actors of color ("Why?" "Good question!"). And I talk about Ira Aldridge, the first known black American actor to play Othello (and other Shakespearean roles), who in the 1830s was criticized in American and English newspapers for not matching white reviewers' ideas of how a black man should act. We also talk about Protestant early-modern English views of Islam; and the Christian ideal of wifely obedience that distorts, and is distorted in, the play's two marital relationships; and the strange way the play seems to operate in two separate time-frames; and magic; and Desdemona's maidservant's bitter denuciation of the double standard in marriage; and Shakespeare's comments on alcohol; and the nature of jealousy; and the challenge and riddle posed by the hero's final speech, which begins, "Speak of me as I am." Othello is about a lot of things.

No doubt that's what Bright Sheng thought, too. Mostly, he planned to teach his students about the challenges and triumphs of setting this famous tragedy to music. But he fell from grace, and never got there.

I thought of contacting Professor Sheng to ask for a comment on these events, but almost immediately thought better of it. As Macbeth might put it, he is "cabin'd, cribbed, confined, bound in" by an illiberal academic structure in which faculty utterances are closely watched, and breaches of acceptable discourse swiftly punished. A genuine conversation would be difficult under these circumstances.

But maybe I'm being pessimistic. Seven hundred faculty and students wrote to protest Bright Sheng's removal from the classroom. Maybe we haven't completely lost our courage, and our minds.

Posted by Grace Tiffany at 6:35 AM