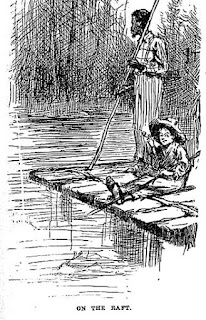 As is well known, Mark Twain's Huckleberry Finn chronicles the peripatetic journey of the boy Huck and his friend, the runaway slave Jim, as they make their way mostly by raft down the Mississippi River. At one point in the tale, Huck, brought up according to a white supremacist ideology that sanctions slavery as part of the natural order, must decide whether to betray Jim to his former owner, as his conscience bids him, or to continue assisting Jim's pursuit of freedom, as some deeper, contrary instinct tells him to do. Corrupted by church and Southern culture's belief that to assist a slave's escape is thievery, and that anyone who does so "goes to everlasting fire," Huck tries to pray "to quit being the kind of boy that I was" -- that low-down type who would help a slave escape -- "and be better."

square; it was because I was playing double. I was letting on to give up sin, but away inside of me I was holding on to the biggest one of all. I was trying to make my mouth say I would do the right thing and the clean thing . . . but deep down in me I knowed it was a lie -- and He knowed it. You can't pray a lie -- I found that out."

Huck tries to "wash" himself "clean of sin" by writing a letter to Jim's former slave-mistress, informing her of Jim's whereabouts, but finally decides he can't do it. His bond with his fleeing companion has a stronger grip on his soul than his church-taught morality, even though he thinks honoring that bond will lead to his own damnation. His spiritual struggle ends with his emphatic decision not to turn Jim in, expressed in this agonized thought: "All right, then, I'll go to hell." Whatever his culture has taught him about right and wrong, a more powerful interior voice compels him to risk not only death, but eternal hellfire, rather than betray his friend. He knows what's right, but doesn't know that he knows it.

The account of Huck's struggle and final resolution, rich with irony and weighted with moral meaning, is considered by many the greatest passage in American literature. In fewer than two pages, through the vernacular Missouri English of the inimitable Huck, Twain eloquently summarizes America's original sin, as well as the hope for its purgation. Thus conscience -- real conscience, not Huck's Southern Sunday school conscience -- can make heroes of us all.

This is the most American of novels, and Huck the most American of characters. Maybe that's why I had read and heard this passage many times before I recognized how very Shakespearean this two-page "soliloquy" is. It derives, in fact, from a private, conscience-smitten, abortive prayer uttered in the middle of Shakespeare's Hamlet.

Huck's struggle with his conscience is not the first echo of Hamlet in the novel. The passage detailing Huck's agony follows Twain's more humorous account of the escapades of "The Duke" and "The Dauphin," the pair of rascally con artists who force Huck and Jim to assist them in moneymaking schemes which include the performance of a "Shakespearean" speech that hilariously intermingles Hamlet's most famous soliloquy with lines from elsewhere in that play and from Macbeth:

To be, or not to be; that is the bare bodkin

That makes calamity of so long life;

For who would fardels bear, till Birnam Wood do come to Dunsinane

But that the fear of something after death

And so on. The Duke's butchered rendition of this speech is as comic as Huck's later meditations are tragic, but both derive (mostly) from Hamlet. When, some chapters later, we come to the articulation of Huck's "fear of something after death," we find that Twain has moved from Hamlet's soliloquy to that of his uncle Claudius. King Claudius' speech, delivered in his private chapel, expresses, like Huck's meditations, inner torment over his inability to repent his own wrongdoing. "Pray can I not," the king says, "Though inclination be as sharp as will, / My stronger guilt defeats my strong intent, / And like a man to double business bound, / I stand in pause . . . ./ May one be pardoned and retain the offense?" Like Huck will do in a book penned centuries later, Claudius longs to be "wash[ed]" clean of sin, but recognizes that he can't, because he's not really sorry -- not sorry for having killed the former king, stolen his crown, and married his widow. "Oh, wretched state, o, bosom black as death!," he groans. "Bow, stubborn knees," he adds, attempting to force himself to pray, thinking, temporarily, as does Huck, that "All may be well." But he can't pray. "My words fly up, my thoughts remain below," he concludes, rising. "Words without thoughts never to heaven go." Like Huck, Claudius "knowed very well" why the prayer wouldn't come: because his "heart warn't right"; he was "playing double."

The great irony, of course, is that Claudius' sin is real, while Huck's is totally imaginary. Claudius is a brother-killer, usurper, and probable adulterer, while Huck -- one of the purest souls in literature -- is only falsely, pathetically convinced that he's mired in sin. Huck's genuinely good nature, which he considers evil, wins out over his "conscience," a superficial and corrupt product of the white slave-owning culture to which he nominally belongs. Twain's genius in this famous passage is to compound the irony, not only inverting Huck's own conclusions about his fallen morality, but turning Claudius' soliloquy upside down. "Double business" -- "playing double" -- indeed.

So wildly different are Huckleberry's nineteenth-century American situation and idiom from those of Claudius, medieval, blank-verse speaking Danish king, that Twain's Shakespearean source is well shrouded. Yet -- as Shakespeare himself knew, when he mined the twelfth century Danish saga of Amlothi for the story of Hamlet -- a writer can tap into another work's power without overtly signaling its influence. The Claudius soliloquy embedded in Huck's agony constitutes another proof that literary masterworks aren't separate plants, but branches of an ever-growing tree, continually adapted to new times, languages, places, and circumstances, and saying, in every year, what it's most important to say.

Posted by Grace Tiffany at 5:00 AM