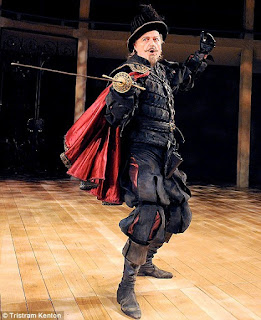 Often people make much of the fact that many of Shakespeare's comedies are set in Italy, a convention of early-modern English comedies which derives largely from Tudor playwrights' important models, the works of the first-century Roman playwrights Plautus and Terence. In plays like The Two Gentlemen of Verona, Romeo and Juliet, or The Taming of the Shrew, you won't find much evidence that Shakespeare knew many actual Italians, or, much less, had ever visited Italy, despite all his Hortensios and Petruccios and Benvolios. Usually his "Italian" characters seem like English folk (though this is not always the case: in England, Italians had a reputation for Machiavellian deviousness which Shakespeare occasionally exploits, as in the character Jachimo in the late play Cymbeline, who attributes his villainy to his "Italian brain"). Early modern English plays were more commonly set in Italy than in any other location. Italian character names were thus so commonplace that we even find them in Hamlet's Denmark. Along with the Germanic Rosencrantz and Guildenstern, we inexplicably get that good old Dane "Horatio," as well as the Danish castle guard "Bernardo." Like other English playwrights, Shakespeare liked names that ended in vowels.

But what of the Spanish? The only historical Spaniard Shakespeare presents on stage is Henry VIII's Queen Katherine, a character whose Spanish-ness is, ironically, suppressed by the dialogue. Shakespeare makes her Henry's true English queen, even having her forcefully defend the English language when Cardinal Wolsey tries, during her divorce trial, to address her in Latin: "O, good my lord, no Latin! / I am not such a truant since my coming / As not to know the language I have lived in. / A strange tongue makes my cause more strange, suspicious; / Pray, speak in English" (3.1.42-46). Katherine comes across as more English than Wolsey.

But when Shakespeare invented a Spaniard, he made him Spanish with a capital "S." Shakespeare's imaginary Spaniards give us a glimpse into the early-modern English idea of who Spaniards were. The images of the Spaniard in three plays suggest that an English audience was primed sometimes to find the Spanish amusing, but not particularly admirable -- and sometimes frightening.

Why would this be so? An answer lies in military, political, and religious history. Spain was England's great enemy around the turn of the sixteenth century. In 1588, the Spanish Armada swept upsea to threaten England with invasion, and was only turned back by storms. At stake in their war was not just England's sovereignty but its national religion. Under Spain's King Philip II, Reformed Protestant England would certainly have been returned to its Old Religion, Catholicism, which would have pleased many oppressed English Catholics, but outraged far more of the population, who, a half-century after Henry VIII's death, were solidly Protestant. Thus Spain represented a huge cultural threat. Why not, then, channel defensive nationalism into on-stage mockery of the Spanish in the crowded theaters?

Thus we have the 1592 Love's Labor's Lost's Don Armado, a laugh-inducing Spanish nobleman whose very name evokes the recent failed naval invasion (Armado/Armada). Armado is hilarious, and not wholly unsympathetic, but he's very silly. What are his follies? This "refined traveler of Spain" is ridiculously proud of his sword-fighting moves -- a reference to the supple Spanish swords, as well as Spanish sword-fighting schools, gaining popularity in early-modern London -- and of his fashionable appearance and ornate speech. The biggest joke against him is, this proud lord has fallen in love "with a base wench," the peasant Jacquenetta. Such a come-down for a Spanish hidalgo!

Pridefulness, indeed -- aristocratic hauteur -- formed an important part of the reputation of Spanish noblemen to English writers, who saw the hidalgos, the Spanish nobility ("hijos de algo," or "sons of someone") as insufferably elitist. Thus a second Spaniard, the Prince of Aragon in The Merchant of Venice, fails in the contest for heiress Portia's hand because he "will not jump with common spirits." Well, actually, he loses because he chooses the wrong mystery box, and misses the one that holds Portia's portrait, but his erroneous choice is marked by a wordy rejection of another wrong box because he dislikes its label: "Who chooseth me shall gain what many men desire." For Aragon, joining "many men" is unthinkable. He's a prince. He's above the "barbarous multitudes." The box he finally chooses is made of silver, which fact may also signal Shakespeare's knowledge that the wealth of many sixteenth-century noble Spanish families originated in South American silver mines, where Indian slaves were worked to death. In any case, it's the wrong box. Aragorn's a loser.

But he's still pretty funny, unlike a third Shakespearean Spaniard, who hides a darker and more disturbing early-modern truth. During the sixteenth century, many Spaniards who left their country for others, including England, did so because of religious persecution. They were Jews fleeing the Spanish Inquisition. In other realms, as well, they kept their religious identities secret, but were often known as Jews (or suspected to be such) because of their Spanish surnames. The scholar Peter Berek has interestingly argued that Iago, the villain of Othello, would have been recognizable to audiences as just such a displaced and secretive Spanish converso. Iago claims to be of Venice, but he has a Spanish name. ("Jachimo," as in Cymbeline, would be the Italian equivalent.) He speaks of his "tribe." He makes jokes about forced conversion (of which we see a real impending example in Act 4 of The Merchant of Venice). Was Shakespeare an anti-semite, constructing one of his most evil characters as a Jew in hiding among Christians?

This could be. But I think what most interested Shakespeare, in creating Iago, was the idea of Santiago, or the patron saint of Spain, St. James. The myths persisted in Spain not only that the Apostle James was buried there (the cathedral at Compostela holds his shrine), but that St. James would appear on horseback during late-medieval battles between Christian Goths and Islamic Moors, to champion the Christian armies. Thus James became, in myth, Santiago Matamoros, the Moor-slayer. A chilling joke, then, is embedded in the name of Iago, who "hate[s] the Moor" Othello, and knows not why.

Xenophobia takes many forms. Some are funny. Some are tragic. Some are ingenious. And some, like Shakespeare, are a little bit complicated. In presenting Islamophobic, treacherous, and elitist "Spanish" characters, Shakespeare was relying on the Hispanophobia and even, possibly, the anti-semitism of Elizabethan audiences.

Which leads to the question, does Shakespeare ever make fun of the English?

Well, yes, but only for dressing and talking as though they come from other countries. See Rosalind's takedown of traveler Jaques in As You Like It, and Portia's criticism of Faulconbridge, the "young baron of England" in The Merchant of Venice: "I think he bought his doublet in Italy, his round hose in France, his bonnet in Germany, and his behavior everywhere." Have some integrity, Faulconbridge, Shakespeare (through Portia) suggests. Be English! In 1595, that meant not acting French, Italian, or German -- and certainly not Spanish. What was it "to be" English? It was convincingly "not to be" from anywhere else.

Posted by Grace Tiffany at 6:28 PM