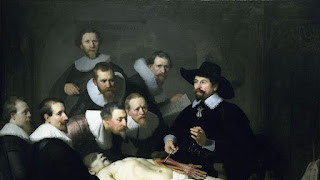 There was no public health administration as such in Elizabethan or Jacobean England. Civic authorities tended to function as health administrators during times of plague, placing obstacles in the way of large assemblies and closing many gathering places when death tolls were high, much as U.S. governors are doing during the coronavirus months (we hope months) today. Doctors -- called variously apothecaries, surgeons, and "chirurgeons" -- did a thriving business, but they did business on their own. Most were quacks, though many were sincere quacks, though that's very likely a contradiction in terms. The word "quack," used in relation to medical fraud, is almost as old as Shakespeare, though in its earliest use it was a verb. A 1628 text speaks of dishonest doctors "quacking for patients." But
even the honest doctors were just plain wrong about a lot of important things. So strong and universal was the belief that bleeding a patient helped stabilize his or her bodily humors, that they doubtless killed more people than they saved. Herbalists -- country "cunning men" and "cunning women" -- abounded, and it's likely that they did less harm than the surgeons; also, midwives knew a thing or two, as did doctors who assisted at childbirths. But even among these, a shocking ignorance of the importance of clean hands and fresh air frequently led to infections that killed the mothers. All in all, the Renaissance wasn't a good time to need medical care.

Queen Elizabeth and her successor King James had their private doctors, of course. These seem not to have been as corrupt and/or crazy as Trump's hired sages, who publicly report him to be the healthiest person ever to have lived. Trump's docs could get fired if they said otherwise -- you can't safely tell the truth to or around this president -- but life for Renaissance court surgeons was even more dangerous. Inigo Lopes, Elizabeth's Portuguese-born personal physician, was executed in 1598 for plotting to poison the queen, a charge of which he was almost certainly innocent. His Jewish origin was likely a factor in the suspicion in which he was held. He was a converso, or convert to Catholicism, but no Englishman really trusted those conversos. On the scaffold, still pleading his innocence, he declared that he loved the queen "as much as he loved Jesus Christ," and everybody laughed. Then they decapitated him.

All of this is grimly interesting. Yet Shakespeare was not very interested in any of these doctors (that is, real ones, with cures, whether those cures were helpful, quackery, or ignorant malpractice). Regular doctors do appear, or are at least referred to, in some of his plays, but they never play important roles (or, if they do, those roles have little to do with doctoring). Doctor Caius in The Merry Wives of Windsor is only incidentally a doctor. He's there not to prescribe, but to be laughed at for his French accent and to be a comic senex, a ridiculously old and inappropriate suitor to the young Anne Page. The doctor who tends the sleepwalking Lady Macbeth in Macbeth comes on stage only to confess his inability to cure her, since her malady is spiritual. "This disease is beyond my practice." If Shakespeare's plays are any guide -- and they are the only guide we have -- he was skeptical of professional doctors. None of his can cure anything. In All's Well that Ends Well, the sick king (he has something like terminal hemhorroids) "hath abandoned his physicians  . . . under whose practices he hath persecuted time with hope, and finds no other advantage in the process but only the losing of hope by time." Doctor Pinch in The Comedy of Errors, like Twelfth Night's Sir Topas the Curate (the fool Feste, disguised as a priest), are both quacks.

But Shakespeare has faith, if not in doctors, in healers. At least, his plays do. These healers appear sometimes in his plays to save lives where surgeons can't. They are more like priests than doctors. They minister to the spirit. It's not entirely clear how they heal, but they are in league with all the virtues of the earth, of minerals and plants, and somehow they channel these virtues into the regeneration of their patients. They are like country herbalists, but with a strange access to the supernatural as well as to mere nature. They are good witches.

Such is "Doctor She," Helena, who arrives at As You Like It's French court to cure the king (offstage, for which we're grateful) in some strange way that's never described, but seems to have to do with her virgin purity. Cerimon of Pericles is, similarly, a natural healer with the magical ability to bring the cold corpse of Thaisa, dead in childbirth, back to life. "Death may usurp on nature many hours, / And yet the fire of life kindle again / The o'er pressed spirits," Cerimon says, claiming he knows of instances from the mysterious Egyptians. How does he wake Thaisa? With music -- which is also the medium used by Paula to bring a statue to life in The Winter's Tale. Clearly something more than ordinary medicine is going on here.

What does this mean? Here's what I think. Shakespeare thought doctors were clowns -- at worst, quacks; at best, failures. But he had faith in the healing powers of art, and of virtue itself. He was skeptical of human attempts to master medicine as a science. He was more hopeful that supernatural powers permeated the natural world, and could bring about what looked like miracles.

At least, he wanted to believe that. His plays show it. And who's to say he was wrong?
Posted by Grace Tiffany at 5:55 AM