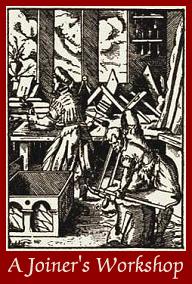 This is interesting, because Shakespeare, famously, was the son of a glovemaker who had also worked as a tanner (a skinner of  cattle for their leather hides). It's hard to believe that Shakespeare himself wouldn't have gotten his hands greasy at some phase of his upbringing. You'd think young William, bursting out of the lower (though not at all the lowest) echelons of society by means of his reading and his wit, would have written in defense of the intellect of his earlier peers (peers in the modern sense of the word). After all, his greatest rival, Ben Jonson, who had once worked as a bricklayer, and who, like
Shakespeare, did not attend university and yet ended up far more learned than most who did (that's Jonson, not Shakespeare) -- this Ben Jonson frequently emphasized the cleverness of "leather apron" men in his comedies. Granted, Jonson's clever goldsmiths and printers usually apply their wit to self-enrichment rather than to virtuous works (who ever didn't?), but the biggest fools in Jonson's plays are the aristocrats. Likewise Thomas Dekker, another of Shakespeare's formidable rivals, celebrated the city's shoemakers as absolute princes of men in his rollicking The Shoemaker's Holiday. Even the king of England does them honor.

However. In Shakespeare we have A Midsummer Night's Dream's sweet but idiotic Bottom the Weaver, who wants -- in a throwback to an earlier age of civic plays sponsored, and acted in, by guild members -- to play every part in the play he and his fellow menials put on for the Athenian Duke, but who lacks all understanding of how to do it. His fellow "rude mechanicals," Flute the Bellows-Mender, Quince the Carpenter, Snout the Tinker, Snug the Joiner, and Starveling the Tailor, are nice guys all, but barely brighter than he is. The only one of the group who possesses a modicum of higher learning, however he got it, is Peter Quince, carpenter and frustrated director. These characters, especially Bottom, are sweet and hilarious. We love them, and the comedy couldn't do without them. But they are the butts of Shakespeare's humor. They're not like Jonson's clever wits, who deliberately generate the jokes. The case is similar with the shepherds in Shakespeare's The Winter's Tale and As You Like It, who are all fine fellows, but simple indeed, and easily gulled by wittier folks like the court-trained Touchstone and Autolycus.

Working-class women fare no better. There aren't many of them, but there is Mistress Quickly, prominent in two history plays and one comedy. She's a barkeep who can't get words right and is easily cheated by Sir John Falstaff (who is not, despite his disreputable behavior, a lower-class character. He's a knight who's slumming). In Shakespeare, most of the clever characters of working-class provenance are a little like Shakespeare himself: men from leather-apron families who have rejected menial labor and are trying to "upgrade" into gentry by working as servants in aristocratic households. (Shakespeare himself, as a player, was a liveried servant of Queen Elizabeth's Lord Chamberlain and later of King James himself.) Consider Tranio, Lucentio's witty servant in The Taming of the Shrew, whose father was "a sail-maker in Bergamo." Busily trying to hide this origin, Tranio engineers a plot by which he can imitate his master (with his master's consent), wear his master's clothes, feast his master's friends, and enjoy the highborn high-life for the greater part of his stay in Padua. Shakespeare as Tranio? I like it. Maybe he played the part.

So. This Labor Day, a way to think of Shakespeare and the working class is to remember how anxious he was to get out of it, and to see how his plays pointed out the way to do it. The plan? Read a lot of books. Increase your vocabulary. Develop a silver tongue to amaze all you meet, and borrow your master's clothes.

Posted by Grace Tiffany at 5:41 AM