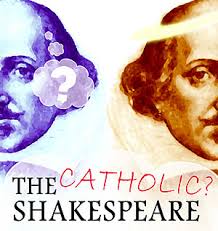 Jane Belvedere, a scholar at Holy Cross College in River City, Indiana, has uncovered the final proof of Shakespeare's Roman Catholicism. It is hidden in his sonnets.

Catholics during the Protestant reigns of Elizabeth I and James I were subject to severe oppression which could include imprisonment, and which, at a minimum, involved prohibitions against harboring Catholic priests or attending Catholic mass. Devoted Catholics who refused to attend English church services were also subjected to steep fines. It is likely, then, that a Catholic, including possibly Shakespeare, would have hidden his religion from the general view.

Now, this hearty evidence of Shakespeare's Catholic leanings has been bolstered by
a new reading of the sonnets. This verse collection, first published in 1609, reveals that Shakespeare went the public one better than simply concealing his private pieties. In fact, his religious ardor led him to display in coded form his reverence for the Old Faith, in poems which, to the untrained eye, seem merely concerned with love, friendship, poetry and language, sexual jealousy, professional rivalry, parenthood, and mortality.

"The answer has been right in front of us all along," Belvedere said by phone from her office. "Look at Sonnet 48. If you take the fourth letter of the first line and count back three in the alphabet, then go to the eighth letter of the sixth line, the second of the third, and so forth, following this pattern through the first two stanzas and then reverting to the first to take the third letter of the first line, and so on, the fourteen lines of the sonnet spell out 'Paul V Righteous,' a clear 'shout out' in praise of the then-reigning pope. Sonnet 50 proceeds in like manner, only here the code begins with the sixth letter of the sixth line, then moves backward through the first quatrain-and-a-half progressively pointing to letters which, when we subtract their alphabetical position from the number 'fourteen' -- the number of lines in a sonnet -- yields this message: 'Two rosaries have I'." A similar process of decoding in Sonnet 110 yields the message "Ho, preest in my cellar." Belvedere is quick to point to a line in Shakespeare's First Folio where "priest" is also spelled with two "e"s.

The ingenuity of this code was that it was altered from sonnet to sonnet, according to a set principle of variation among the letters in the alphabet. This makes the messages almost impossible to locate and decipher, which must have afforded Shakespeare the immense satisfaction of laboriously concocting a coded religious message that no one without Jane Belvedere's cryptographic "skill set" would ever read. "I think, wow, how he must have exulted when he came up with 'Foxe Begone Fool,' an insult to John Foxe, the sixteenth-century Protestant martyrologist. That one's in sonnet 87. And then there's 'Easter Day, and Off To Mass' in sonnet 14, and then what I and my scholarly fellow-travelers -- I refer to the New Rosicrucianists -- are calling the Iambic Ejaculation, namely the 'Maria, Ave, Ay, O, Ay!'  of Sonnet 112."

Belvedere's findings are slated for publication in the coming year. Her work, besides inspiring a bevy of new New Rosicrucianist scholars, has now led her beyond the sonnets into more ambitious projects. Her current research involves a new reading of the religious subtexts of Shakespeare's histories, tragedies, and romances, works long erroneously thought to deal only with issues of tragic ambition, marital, family, and political conflict, romantic love, mortality, the formation of historical memory, the pain of repentance, the nature of evil, the mysterious workings of Providence, the difficulty of forgiveness, and the transformational power of the creative imagination; and unwittingly enjoyed as such for four centuries all over the world. In fact, as she will show, Shakespeare's plays, like his sonnets, were vehicles of Shakespeare's sly, opaque, and highly incriminating religious itinerary. Embedded within Beatrice's and Benedick's dialogue are lists of religious paraphernalia and the names and addresses of Catholics who sold them. Hidden in Prospero's farewell in The Tempest is a recipe for a Lenten fish dinner, while Macbeth's "Tomorrow and tomorrow" soliloquy contains, in coded form, directions to a forbidden saint's shrine ("Take ye third turning off Oxford Road twixt Wembley and Chiltern Hills"). Belvedere says, "We can now prove that Shakespeare's plays and poems were not written for everyone and about everything, but are highly cryptic transmissions that bespeak a vanished historical moment, expressing the concerns of a marginalized group of Britons who no longer exist as such. And I think that's very exciting."

Posted by Grace Tiffany at 4:55 AM