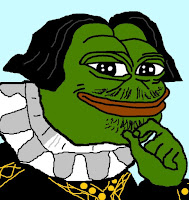 
Where are the Shakespearean amphibians? And what are they? Well, this post would be much longer than I intend to make it if I discussed all the animals Shakespeare and his fellow Elizabethans thought were amphibians but weren't (otters, for example, and dolphins), and the symbolic uses they made of them. For
that, you'll have to consult my 1995 book, Erotic Beasts and Social Monsters: Shakespeare, Jonson, and Comic Androgyny (University of Delaware Press, 1995). Chapter 2 is particularly exciting. But here I will only discuss actual frogs and their ilk, and I will say a lot less than I did in that book, because for these posts I don't let myself do research. After all, anybody can Google "Frogs in Shakespeare." Perhaps you yourself have just done so. As for me, at least in blogging, I'm like our (tropical-frog-resembling) president. If I don't know it already, I figure it doesn't matter.


So, what do I know? Hmm.The first Shakespearean frog that comes to mind is a toad (yes, toads are not precisely frogs, but Shakespeare isn't fussy). I'm thinking of a special jeweled toad, to which jolly exiled Duke Senior refers in act 2 of As You Like It. He says, "Sweet are the uses of adversity, / Which like the toad, ugly and venomous, / Wears yet a precious jewel in his head." Toads do not really wear jewelry, unless you dress them up. Duke Senior is here referring to the folk-medical idea that certain venomous toads bear the antidotes to their own poisons in bright protuberances on their foreheads. For all I know, this is true. (I'm not doing research, remember.) It also makes a good metaphor for finding the bright side of a misfortune (which is itself a metaphor, I know).


The jeweled toad is a rare instance of an amphibian in a comedy. Usually if you talk about toads or frogs, you're a in a tragedy, and it's one of the ways you know. Let's consider one of the most famous frog references in Shakespeare: "Eye of newt, and toe of frog . . . " This poor frog-toe, or I should say this poor frog's toe, is thrown into the Witches' cauldron alongside many other dismembered animal parts. Where did the Witches find these parts? I like to think they were parts already when they were found, but I'm dubious, because the Witches are not above throwing into the pot an entire poisoned toad, one that has been hiding under a cold stone for "Days and nights . . . thirty-one," presumably trying to avoid them. He has failed, and they boil him, and then Macbeth drinks this amphibian cocktail (which in fact has ingredients deriving from various additional sections of the animal kingdom, including reptiles). And Macbeth may not be the only character who drinks frogs. In King Lear, mad Tom O'Bedlam claims to survive not only on "the swimming frog" and "the toad," but to swallow tadpoles, along with wall-newts, whatever they are. (I'm sure the internet knows.) However, since Tom is only pretending to be crazy, he may be lying about all this.


Other tragic toads exist. Othello's marriage gets so unhappy that he imagines it as a "cistern for foul toads / To knot and gender in." That's not an image anyone wants to dwell on, including Othello. Interestingly, "foul" seems only to be an intensifier here. When we consider Shakespeare's treatment of toads as a whole, "foul toads" seems like a redundancy. It just might be that the most positive reference to frogs or toads in all of Shakespeare is Duke Senior's, quoted above, and even that one was ambivalent.


So, why are there so few good frogs in Shakespeare? You might think Antony and Cleopatra  would treat amphibians with more dignity, since the play is strong on the elsewhere-similarly-maligned reptile family (or class. Or cohort. Or interest group). Cleopatra is compared to a crocodile, and while it is not clear that this is 100% a compliment, it doesn't seem to be an insult. The play also gives a starring role to a snake in its final scene. Snakes in Shakespeare are a different subject, one far more vast than toads and frogs. Suffice it to say here that serpents acquire a certain grandeur in Antony and Cleopatra that they lack in other Shakespeare plays. This only goes to show that everything changes when you get to Africa, as I meant to argue with regard to my second jettisoned blog topic, mentioned so far above that I'll repeat it here: "Do You Have to Be Egyptian or a Goddess To Have Unmarried Sex in Shakespeare and Not Have Everyone Call You a Whore?"


Maybe I should have gone with that one after all. But there's always next month.
Posted by Grace Tiffany at 5:17 AM