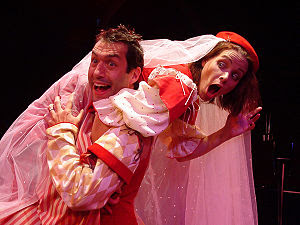 I frequently teach Shakespeare's The Taming of the Shrew, a play which remains amazingly popular despite its apparently outdated preachment that a woman is happiest when subservient to her husband. The play's continuing popularity is probably due to three main factors:

1. Shakespeare wrote it and it's really funny.
2. The Biblical injunction "Wives, submit to your husbands" is not an archaism for a significant minority. (This is news to most academics.)
3. The play presents an intriguing study of how behavior can be altered through a program of targeted rewards and consequences.

The third reason is most interesting to me because it's the most useful. That is, if we put to the side the issue of the ethics of "taming" a woman, the play can afford us some insight into ways to effect change in another person's behavior without drugging that person. Behavioral psychology, whether focused on spouses, children,
bosses, or friends, aims to do just this. Those practicing behavioral therapy devise systems of reward for the behavior they'd like to see more of, and studiedly ignore, which means refuse to reward (even with attention) the behavior they'd like to extinguish. This is what the groom Petruchio does when he withholds dinner from Kate until she thanks him for bringing it to her, refuses to advance an inch towards a desired destination (her sister's wedding) until she stops arguing with him, lavishes affection on her whenever she agrees with him, and refuses even to acknowledge the angry outbursts with which she attempts to enforce her own will, insisting that she "cannot chide" and "sings as sweet as any nightingale."

Okay, it's really sexist and, to quote some of my students' responses, "ghastly" and "horrifying." But imagine Kate as a four-year-old child and Petruchio as a mom or a dad. (Kate many times complains that she is in fact not a child, but she does act like one.) If we imagine Petruchio's strategy as a parental one, the horror disappears, and immediately we see the benefit of his approach. It's so much better than combat. If you want to influence someone's behavior, isn't it common sense to give him or her a reason (praise, hugs and kisses, dinner) to do what you want him or her to do? What about issuing commands, instead? How well does that work? More importantly, which strategy gives the tame-ee (if we must) an experience of choice rather than coercion? Which one allows compliance without sacrifice of identity? Shakespeare's play concludes with a line which is sometimes cut in performance, presumably because directors can't see how profoundly it illuminates the nature of Kate's transformation. When Hortensio says to Petruchio, on his exit,"Now go thy ways, thou hast tamed a cursed shrow" [shrew], Lucentio corrects him: "'Tis a wonder, by your leave, that she will be tamed so." Kate has not been tamed, but chosen to behave nicely. Because, why not? She gets something out of it. (For one thing, she just helped her husband win a bet on whose wife was most obedient. Presumably they are on their way to Monte Carlo to spend the money.)

Shakespeare suggests that if the behavior is freely chosen, then what you are performing is indeed you. He indicates this not just in The Taming of the Shrew, but in other plays as well. Here, for example, is Hamlet advising Gertrude: "Assume a virtue, if you have it not. .  . . Refrain to-night [from vice] / And that shall lend a kind of easiness / To the next abstinence, the next more easy, /
For use almost can change the stamp of nature." "Use" -- habit -- alters natural inclination. (Or anyway it "almost" does.)

Behaviorism works in Henry V, too. There King Henry transforms the quailing English into valiant warriors through a speech urging them to "imitate the action of the tiger." He praises them in advance for the behavior he wants to see ("you noblest English"), and later promises another group of soldiers that battlefield  bravery will actually turn them from commoners into gentry. Okay, he's lying to get them to fight. But he gets them to fight. He does this not through commanding them (this is Shakespeare's Henry V, not the historical one, by the way), but by inviting them onto the battlefield with the promise of glorious self-transformation. Born one thing, they can "act" their way into another self. And presumably, though the veterans don't, after all, get knighted, they are different people after the Battle of Agincourt than they were before. (I mean, the ones who aren't dead.)

A third example comes from The Tempest, where Caliban shows us he can change, despite Prospero's complaint that he is "a devil, on whose nature / Nurture cannot stick." (Yes, Shakespeare, not that Victorian dude, made up "nature vs. nurture.") Prospero's pessimistic, but after Caliban feels the self-wrought pain of his murderous actions (he nearly drowns), he humbly vows to "seek for grace" at the play's end. Prospero is a terrible behavioral psychologist. He doesn't ignore bad behavior, he punishes it, and thereby increases resentment and the likelihood that the adversarial behavior will increase (as, in Caliban, it does). Fortunately, Providence, not Prospero, is the educating force in The Tempest, and events themselves encourage Caliban to change his act, which means to change who he is.

So: was Shakespeare a behavioral psychologist? Actually, we don't know what Shakespeare was or wasn't, except that he was a writer smart enough to observe how people can be behaviorally transformed. Of course, there are plenty of examples throughout his plays of characters for whom performance is hypocrisy, and who don't become virtuous by merely pretending to be so. Richard III, Macbeth, and Hamlet's Claudius all "assume a virtue though [they] have it not," and stay rotten. But their play-acting, their assumption of a virtue, is not a deep behavior, but a superficial matter of language. All of them talk the talk of the good king while walking a rather bad walk in the other direction. That is, they lie about what they are doing. Transformational performance in Shakespeare doesn't work that way. It ties speaking to action. Its practitioners' nonverbal behaviors bear out their speech actions, though these behaviors may be new and unfamiliar to them, and seem like roles scripted by someone else. (As they are.) This type of genuine actor "suit[s] the action to the word, the word to the action," to quote Hamlet again. When that kind of performance is entered into, there truly is "no screen between the part . . . played" and the self who's playing.
Posted by Grace Tiffany at 6:21 AM