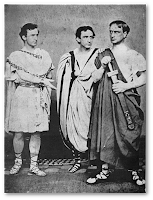 Commonly these people are angry because something in their world is no longer the way it used to be. They want the world around them to match a world they think
they remember, and believe they can achieve that goal through destroying some folks. This is true even if they don't really remember the world they think they want, even if that world is a fantasy they read about in a child's history book, or a tale they heard from their grandfathers, or an idea they got from a song. They're sadly disappointed in the world that surrounds them. White supremacists are nostalgic for an America in which blacks and Indians were happily subservient or invisible, Jews lived over in Europe or someplace, all other whites shared a religion and got along fine, and people who worked hard got exactly what they deserved. In other words, for a place that never existed. Islamic jihadists believe that the modern Western world has corrupted their traditional religious communities, even though, centuries in the past, Islamic culture was scientifically progressive and actively sought commerce with the west. The Nazis believed that in the pre-modern days of the German "volk," landowners and peasants lived in organic harmony. Peasants were not interviewed for that story.

We're all nostalgic, and for us all, it's not just lack of precise historical knowledge but our own faulty memories that round off the edges of the past. Only a few get disappointed enough about life to start shooting, or drawing up plans for genocide, or blowing up buildings with people inside them. I'm okay with calling those people crazy, no matter the size of their club.

As a Renaissance scholar, I've become interested in the face nostalgic-terrorism wore four centuries ago, during the latter period of the Protestant Reformation, when a large number of Englishmen and Englishwomen felt that the world of their parents, as they thought they understood it, was disappearing forever. Most English Catholics shrugged and converted to Protestantism when their monarch did so in the sixteenth century. They showed the kind of practicality expressed, in an obverse way, by Henri of Navarre, a Huguenot, who, offered the crown of France if he would convert to Catholicism, did so, saying, "Paris is worth a mass." (He said it in French.) Disliking bloodshed, the overwhelming majority of formerly Catholic families in England peacefully accepted the country's transformation into a Protestant nation under three Tudor monarchs (as they might have accepted its transformation back into a Catholic one under Mary Tudor, who ruled for a few brief years before Elizabeth I, had Mary lived long enough to achieve her goal). But a significant minority did not accept it. Those Catholics' anger and dissatisfaction at their treatment, first under Elizabeth I, and then under her Protestant successor James I, finally exploded -- almost literally -- in a plot to destroy the king, his family, and the entire Protestant aristocracy by igniting thirty-six barrels of gunpowder stored under the House of Lords, on the opening day of Parliament in 1605.

The plot was conceived during a period of intense popularity for English history plays, particularly those of Shakespeare. These plays presented a glorified view of a medieval, Catholic England wherein scions of noble households defended their family honor by warring against a treacherous new king. In 1601, one of those plays, Richard II, had been specially performed for the supporters of a rival of Queen Elizabeth, the Earl of Essex, on the eve of his (unsuccessful) action against the queen. The later plays in Shakespeare's history-play cycle glorified the Catholics of the north, including one warrior whom another character calls "Gunpowder Percy."

Gunpowder Percy, my new book, is fiction, but it takes as its starting point the fact that in the period between 1593 and 1605, history plays were adored by angry young Englishmen. Maybe the gunpowder plotters -- Robert Catesby, Thomas Percy, Guy Fawkes -- thought they were receiving coded messages from Shakespeare, telling them to commit murder and mayhem as a way back to a past they saw in their dreams. If so, they wouldn't be the last so to delude themselves. John Wilkes Booth spoke the eulogy for Brutus, Shakespeare's most famous assassin, in a production of Julius Caesar five months before Booth shot and killed our greatest president, in the name of a South he romantically revered. No doubt Booth thought he was getting messages from Shakespeare, too.

Should we blame Shakespeare? Of course not. There will always be those who, to quote Hamlet, "botch [his] words up fit to their own thoughts" (i.e., to fit their own thoughts). Things turn mad and tragic when those thoughts are violent. But it's not the dispatcher's fault.