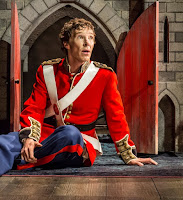 That the second in that group was David Tennant's, in a 2012 production, might indicate my preference for newer approaches to the role, but it doesn't mean I'm not
familiar with older ones. In fact, I find Olivier's portrayal of the Danish prince more subtle than Kenneth Branagh's, and I hate the listless line-delivery of slacker-prince Ethan Hawke in Almereyda's Hamlet 2000  (though Hawke's an actor of talent when not doing Shakespeare). I was also bored by Hamlet's relentlessly high-speed delivery in the 2015 production in Stratford, Ontario. Cumberbatch's Hamlet was not great because it was modern. He was great because every one of his lines was considered and spoken as though it emerged spontaneously from the conversation taking place on stage. What followed from that deep investment in the script was a complex and entrancingly variegated line delivery, which Cumberbatch accompanied with an energetic and no less varied physical performance. He matched the action to the word, the word to the action, from the start to the finish of the play.

From the start, yes. Most of us were surprised to hear Hamlet uttering the play's opening question -- "Who's there?" --  because it's meant to be said by Barnardo, wary at the approach of a fellow watchman, on the Elsinore castle battlements, in a scene in which Hamlet doesn't even appear. Hamlet saying "Who's there?" was a less radical change to the play's opening than putting the "To be or not to be" soliloquy first (Turner's startling tactic maintained for the first several weeks of the play's Barbican run, and only changed when the critical outcry became too damning). The reassignment of the line nonetheless signaled a free-handed (even high-handed, to go with the high-hatted) approach to the play's dialogue, in which scenes were so frequently spliced and re-ordered, and word-changes so many, that the production bordered on adaptation. Some of these changes were discernibly supportive of Turner's interpretations of character. For example, when Laertes (Kobna Holdbrook-Smith), enraged at the killing of his father Polonius, stormed into Elsinore baying for blood, Turner's King Claudius (the excellent Ciaran Hinds ) cowered before him, and was quick to disclaim responsibility for the deed. Polonius was dead, but "Not by me!" Shakespeare had it otherwise. His Claudius, earning a measure of our respect, brazens it out before sword-wielding Laertes, saying simply Polonius is "Dead," while it is Gertrude (Anastasia Hille) who rushes to her husband's defense, restraining Laertes and adding, "But not by him!" Turner's Gertrude seemed rather to be egging Laertes on in his attack on craven Claudius, which was an understandable directorial choice, given she'd just been informed by Hamlet that Claudius had killed her former husband. But other changes in the script made no sense. Laertes tells Ophelia that Hamlet, a prince, is not free to woo where he will because he cannot "carve for himself"; Turner made that "choose for himself," thereby losing a resonant and perfectly understandable metaphor suggestive of Hamlet's hidden violence, and of Ophelia as meat (which fits when Claudius and her father use her as bait to discover Hamlet's secrets). Late in Turner's production, Hamlet told Rosencrantz not to believe he could keep Hamlet's secrets and not his own. The correct line is "Do not believe . . . that I can keep your counsel and not mine own." Turner's alternative was incomprehensible.

The reasons this stuff didn't matter much were that unchanged lines were preponderant and that, more than anything, the strong acting of the whole cast carried the show. This was especially so in the case of Cumberbatch and Hinds. Hinds's Claudius -- sinister and overbearing from scene one -- was so recognizably human in his loud arrogance that his one guilt-laden soliloquy, paradoxically, achieved real pathos. Having seen how entrenched he was in the role of strong-man, we could easily feel his intense difficulty in bowing his "stubborn knees" to assume a humble posture before God. And while the tatooed, hipster Horatio (Leo Bill) looked bizarre among the military Danes, his presence helped underscore Hamlet's sardonic intellectualism, just as their conversation helped Hamlet express his instinctive irony. An elaborate, complicated, haunted-castle-looking stage-set, far though it might have been from the Elizabethan bare stage, could not distract us from the qualities of these actors, who used it fully and naturally. The mental imbalance of Ophelia (Sian  Brooke) appeared early through her obsessive writing and mournful piano-playing, while the alcoholic Claudius exploited a variety of locations from which wine could be poured and savored.

But Hamlet was, as he should be, almost the whole show. Slang for over-acting is (not coincidentally) "hamming it up," and the metaphor is "eating the scenery." But Cumberbatch's Hamlet only enacted over-acting, or rather, delegated over-acting to the visiting Player (Ruairi Conaghan), for whom it was clearly a specialty. In an ingenious addition to the script, the Player was heard hammily reciting phrases from Hamlet's own soliloquies ("Smiling, damned villain!") just prior to the "Mousetrap" scene. They were  among the "dozen or fifteen lines" Hamlet had inserted into "The Murder of Gonzago," which only began to be delivered when Claudius abruptly truncated the performance. While Hamlet's own delivery had been naturalistic, the Player's was overdone and plummy. So Hamlet was right: real emotion can't be authentically expressed through "actions that a man might [over]-play." Except, bizarrely, it can, because when Hamlet/Cumberbatch said those "villain" lines to us in soliloquy he was restrained, embittered, and utterly convincing. He didn't eat the scenery. As for the actual scenery and props, Cumberbatch practically held them in his hand, leaping effortlessly on and off tables, changing jackets on stage, and accomplishing a variety of business without losing concentration or making the blank verse halt. It's a cliche of theater criticism to say an actor inhabited a role, but that's what he did. It was clear that his wacky toy-soldier routine was as fun for him to perform as it was for us to watch.

As one of my fellow filmgoers said, "Some might call me a Cumberbitch, but I prefer to consider myself a Benedictine." All Benedictines should watch this filmed production if they get a chance, but Cumberbitches will love it, too.

*A bit of false advertising on the part of the RSC, since in most locations the screening was not live but delayed. This only matters because theaters use the fiction of live-streaming to charge double the normal amount for movie tickets.
Posted by Grace Tiffany at 5:57 AM