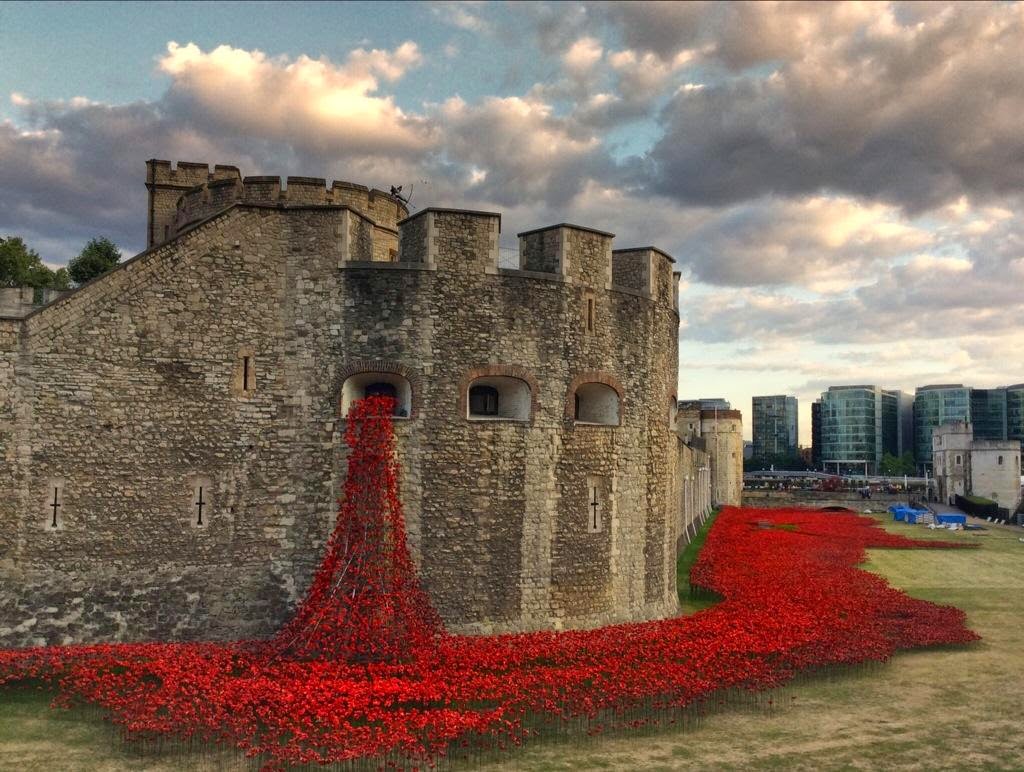 The poppies spilling from the dark Tower like a tide of blood brought to mind the number of bloody deaths that took place there during the Renaissance. Thomas More, Anne Boleyn, Thomas Cromwell, Jane Howard, Jane Grey, Robert Devereux, and Walter Raleigh took their axe strokes there, as did quite a few other hapless
gentlemen and gentlewomen. I stress that these were high gentry -- knights, lords, or ladies by the time they died, if not when they started life -- to remind us that Tower execution was a status thing. Not, of course, the mark of social distinction you'd choose, if asked, though it wasn't unusual for the condemned souls to declare, before the blade came down, that they embraced death as just punishment for their alleged crimes against the monarch. And who knows? Maybe some of them meant it.

OK, but Walter Raleigh? Because I grew up in Virginia, I'm instinctively bummed that this gallant gentleman we read of in our history books -- the knight who spread his velvet cloak over a puddle to protect the soles of his sovereign's shoes (though I never understood how that could work) -- was made to die at the Tower. Raleigh, really? Capital-of-North-Carolina Raleigh? Yet it's true. Raleigh the Tobacco King was sentenced to die not, as he should have been, for popularizing smoking in England (a crime for which John Lennon called him a "stupid get"), but for the more mundane sin -- alleged, and never confessed -- of plotting sedition against James I. He was imprisoned in the Tower from 1604 to 1618, where he wrote bitter, beautiful poetry, and was only temporarily released to lead an expedition of soldiers in a renewed search for El Dorado, the rumored city of gold, in South America. While there he destroyed Spanish towns (and very likely some Indian ones), didn't find El Dorado, and soon after his return he was brought to the block, mostly to mollify the Spanish, with whose king James I, unlike his royal predecessor, was friendly. Doomed, romantic, visionary, monomaniacal Raleigh! He was too fast to live, too young to die. (Well, he was 62, but I think that's too young.)

Shakespeare was alive and writing plays through most of Raleigh's imprisonment. He may have met Raleigh beforehand, and may have thought his life dramatic indeed, but been wise enough not to write a play based on such topical and incendiary events as characterized the life of Sir Walter. (At least not directly. I like to think Raleigh's situation partly inspired Shakespeare's vision of The Tempest's Prospero, a wizardly mage exiled on an island.)

Shakespeare, however, had Raleigh-ish things to say about the Tower, which loomed over London when he lived there, and was visible from the river he crossed to get to the Globe in Southwark. His -- or rather, his characters' -- Tower comments mostly occur in Richard III, that play so hated by the Richard III Society; that tragedy which has done more than any other historical speculation to tie King Richard to the mysterious disappearance of his royal nephews from the Tower of London on the eve of the coronation of one of them. And then shortly thereafter, Uncle Richard got himself crowned king. I have to say, with apologies to the Ricardians, that this one looks pretty bad for Richard.

Richard III is Shakespeare's Tower play. Part fort and mostly prison, the Tower looms over the tragedy's action from start to near-finish. It's almost a character. The play begins with a scene wherein Richard's brother Clarence is being marched to the Tower (on cue, right after wicked Richard informs us that he has started the story about Clarence which got him arrested). That moment is shortly followed by the depiction of Clarence's death, still in the Tower, in what has to be the lengthiest murder scene ever staged. Its seeming endlessness is particularly striking given the fact that its main characters are are so minor that they're called only First and Second Murderer. "Take that! And that!," First Murderer finally says, getting tired of the scene, and stabs Clarence, then drags his corpse off to be stuffed into a wine cask. "I do not like the Tower," says young Prince Edward in a subsequent scene. We cannot blame him.

The scene wherein Edward expresses his dislike also contains a story about the Tower's history, current in Shakespeare's time, to wit, that Julius Caesar began its building as a fort, "which since, succeeding ages have re-edified." Though the story's false -- the Tower was started by William the Conqueror -- it lays the ground for one of Shakespeare's most remarkable metaphors for his history plays. Edward says that like the Tower, whose foundation was added to by succeeding generations, "the truth should live from age to age, / As 'twere retold to all posterity." This process of "re-edification" -- a word that combines the senses of building and informing -- is like the continual retelling and restaging of history, to vivify the past "even to the general all-ending day." The lines suggest that Shakespeare saw his histories as a moving Tower, or a "living monument," to borrow a line from Hamlet. The lines also link the English histories to the plays of ancient Rome Shakespeare had yet to write, including Julius Caesar. All these plays contributed, and would contribute, to a unified and continuously re-edifying national story.

A pretty bloody one, including lots of spectacular lies. But then, that's entertainment.

Speaking of such -- of spectacle, not lies, since this thing happened -- elsewhere in Richard III, Lord Hastings, friend of doomed young Edward, is dragged off to the Tower next, to be beheaded. We the audience don't see the beheading, but we do see the head, which is brought back for Richard's approving perusal, and ours. Soon after comes the terrible scene, reported but not staged, of the "tyrannous and bloody act" of the murder of the young princes, Edward and his brother, as they sleep in the Tower. The killing is preceded by their mother's futile prayer, in which she addresses the Tower directly:  "Pity, you ancient stones, those tender babes / Whom envy hath immured within your walls, / Rough cradle for such little pretty ones! / Rude ragged nurse, old sullen playfellow / For tender princes, use my babies well!" But we know the Tower rarely uses its prisoners well.

And so. Poppies at the Tower? For Shakespeare, poppy was a dream-inducing drug, and he might have liked this symbolic aspect of a modern sculpture which translates terrible events into a kind of pleasure, especially since "dream" was his favorite metaphor for theatrical experience. Still, any segue from Shakespeare's artistic rendering of Tower executions (or murders), to World War I, must be more impressionistic than logical. So my segue is simply to acknowledge the chain of thoughts that come into my mind when I see the image of the Tower and its blood-red poppies. Decapitated heads, a floating body, corpses in the fields of Flanders (where they lay in Shakespeare's time as well, when England fought Spain there), my bleeding (literally) grandfather driving an ambulance of wounded toward a field hospital, and surviving to write a bittersweet novel about the Great War that hardly anyone read.

Just from the above-described instances of Shakespearean Tower violence, it's hard to guess what Will S. would have thought about the situating of a war memorial there, or of the violence compounded -- the Great War's immense, leveling blood-waste of both commoners and gentry -- that this newer art-work has recalled. But some lines from Hamlet tell us what Shakespeare was capable of thinking, or, at least, of imagining someone else thinking. In Hamlet's fourth act, a captain of Fortinbras' Norwegian army somewhat puzzledly tells Hamlet he and his men are being marched off  to Poland "to gain a little patch of ground / That hath in it no profit but the name." In an aside which links Norway's war fever to his own father's death by poisoning, Hamlet muses, "This is th' imposthume of much wealth and peace, / That inward breaks and shows no cause without / Why the man dies." He marvels that a commander would "expose what was mortal and unsure / To all that fortune, death, and danger dare, / Even for an eggshell," so that Hamlet sees "the imminent death of twenty thousand men / That for a fantasy and trick of fame / Go to their graves like beds, fight for a plot / . . . Which is not tomb enough . . . / To hide the slain."

Will Shakespeare, could you have read the book of fate, and seen the crosses to ensue, would you have shut the book, and sat you down to die? Because three centuries later, it wasn't twenty thousand men who died to gain a patch of ground. It was ten million.
Posted by Grace Tiffany at 4:04 AM