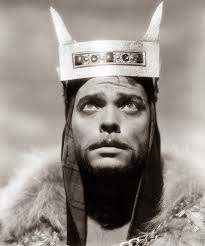 "Shakespeare was always looking for villains for his plays,
and rewriting history," Paddock says. "And in 1605 he worked
for King James I, wh'od been the victim of several assassination
attempts, and was a generally unpopular geezer. James wanted
a play to caution his subjects against all thoughts of rebellion
or regicide. Shakespeare the King's Man knew what side his
bread was buttered on, so he came up with Macbeth, a play in
which a disloyal nobleman kills a king, but gets his head sliced
off for his efforts."
Paddock hopes that the skeletal remains found in the deep freeze will disprove Shakespeare's "malignant tale," and show that Macbeth kept his head til the end and was given all honors in burial, "as befitted a beloved king." Malkin added, "His skull was there in the deep freeze along with the rest, and there are no gashes on the other bones." When a reporter suggested that the detaching of a head would have been sufficient cause of death in battle without other damage, and that the skull might have been thrown in a pit afterwards with the rest of the skeleton, the women said, "No! No! No!," in chorus. Paddock, Malkin, and Pywacket claim their historical and genealogical research disclosed that, to the contrary, Macbeth died in his sleep in his castle at Dunsinane as the result of intestinal disturbances brought on by a sleeping draught administered by his wife's physician. Afterwards, he was entombed in a church, which was plundered centuries later during the Scottish Reformation, at which time Macbeth's bones disappeared.

"Scottish King Jamie needed some historical enemies, some scary examples of king-killers come a cropper," says Harpier Malkin. "So all evidence that Macbeth had been a virtuous ruler fell victim to that project. The English historians bought the fake story, and so did Shakespeare. He was a playwright. He didn't care what was true and what wasn't. He was just out to make a buck."

As for the question of how the royal bones made  their way to the deep freeze of a Tesco supermarket, Paddock said, "The owner of the Queen's Road store is named 'Stuart.' Figure it out from there." 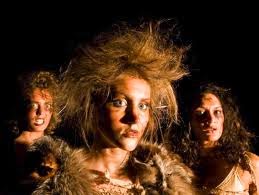 The Friends of Macbeth (pictured at right) insist that a revised, corrected history will show that Macbeth was "a merry old soul, much like Old King Cole." Says Malkin, "Accounts we've uncovered among descendants of the Macbeth family indicate that Uncle Macbeth was a friend to children, fond of reptiles, indeed a festive lad, and a poet in his own right. In fact, he wrote some outlines for plays that, along with the bones, were stolen by the Stuarts. King James shared these with Shakespeare, who saw their merit and of course passed them off as his own." Pywacket proposes, for example, that the dialogue between Stephano and Trinculo in The Tempest was "almost entirely the work of King Macbeth."

Paddock indicated that a recent "late night meeting" had led the Friends of Macbeth to a "hunch, almost a vision" that Macbeth's bones were to be found in Queen's Road. When asked where the bones were now, and what would be done with them, the women were evasive.

"The Scottish Historical Society has proposed their reinterment, perhaps in Edinburgh's St. Giles Cathedral," Paddock said. "But the Friends of Macbeth would like to put them to some fitting ritual use."
Posted by Grace Tiffany at 11:59 AM