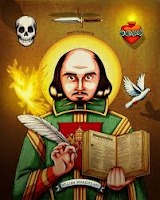 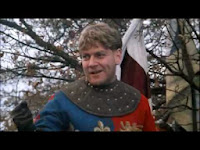 Saint Crispin Crispianus. You're right. This isn't he. This is Kenneth Branagh as Henry the Fifth, giving his famous "St. Crispin's Day" speech before the Battle of Agincourt in 1415, in Branagh's 1989 film Henry V. And I should have said this isn't they, because Crispin and Crispianus were a pair of martyred twins. Their sacred day was and is October 25th, which happened to be the day of this battle, at which the English pounded the French. More than four hundred years later, during the Crimean War, it was also the day of the Charge of the Light Brigade, which turned out a little differently. Crispin Crispianus was sacred to shoemakers, which makes it crafty of Henry to make much of them, since at this point in the play he is addressing predominantly foot soldiers, trying to convince them that, be they "ne'er so vile," if they shed their blood with him on St. Crispin's Day they'll be part of his "band of brothers." It's a resoundingly successful pep talk, especially when accompanied by a swelling musical soundtrack.

Saint Paul. The apostle Paul's writings are everywhere in Shakespeare. One example is Paul's comments on marriage in Ephesians, which figure both seriously and ironically in The Comedy of Errors. But the play in which Paul is specifically invoked is Richard III (that's Car Park Richard). Richard himself likes to swear by Paul. This is puzzling. Maybe someone has figured it out, but I haven't. I think I understand his swearing "by St. Paul" in the second scene of the play, as Richard's little joke, since he and his auditors are near St. Paul's Cathedral, a prominent church and, in its yard, a commercial gathering place in early modern London. (It's pictured above in its pre-Great-Fire-of-1666 incarnation.) What I don't understand is why Richard keeps swearing by Paul as the play goes on, as though Paul's his patron saint, though Richard himself is something between atheist and devil-worshipper. There's another, more subtle reference to Paul in the later Shakespeare. The Winter's Tale's Paulina, the brave, outspoken servant who risks prison to shame her sinning king into repentance, is named for him. The reason's obvious. 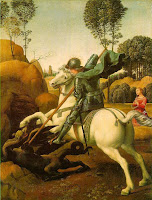 And this on the left, is of course Saint George. As the English well know, he is their country's patron saint, and the saint on whose day (April 23rd) Shakespeare is thought to have been born (close enough), which fits. George was a Roman soldier under the Emperor Diocletian. Eventually he was martyred by various means of drastic torture such as boiling in oil, halving (a step gentler than quartering), and -- I just asked my husband the word for "being crushed by stones," and he said -- "squishing." (I remember now. Pressing.) Before his martyrdom he famously slew a dragon, or so they say. In The Faerie Queene, Shakespeare's contemporary Edmund Spenser famously allegorized the dragon battle to signify that between England's Church (George, or the Red Cross Knight) and the Church of Rome. How does Shakespeare use Saint George? Mostly by having English soldiers yell his name before they charge into battle. Richard III yells it. Henry V yells "God for Harry, England, and Saint George," putting himself nicely first in God's list. 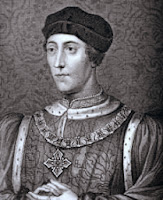 Now, some may think I'm cheating with this next "saint," because he really isn't one, and never was, at least officially. But King Henry the Sixth, pictured left, was treated as a saint for fifty years after his death in the late 1400s. This peaceful king, son of warlike Henry V, had been "martyred" in the Wars of the Roses (killed by the dastardly Richard of Gloucester, who would become Richard III), and he maintained (though I guess that's not really the word) a shrine at Windsor. The scholar Eamon Duffy notes that there are nearly a third as many pilgrims' badges surviving from Henry's shrine as from Thomas Becket's at Canterbury, which indicates Henry's great popularity. It seems he was regarded as a healer, much like the earlier king Edward the Confessor, who was canonized, and whose healing powers in life Shakespeare refers to in Macbeth (a play set in the eleventh century). Indeed, one story survives of an infant who was choking on one of those pesky pilgrimage badges. St. Thomas did nothing for him, but when his parents prayed to King Henry, he coughed the badge up. Neat! Henry the Sixth is given powers of prescience in Shakespeare's Henry VI, part 3. He predicts that the boy Henry Tudor will one day rule. And his corpse features interestingly in the second scene of Richard III, referred to above. Lady Anne, his mournful daughter-in-law, standing by Henry's corpse, notes that its dead wounds "bleed afresh" when his killer Richard approaches. That's the kind of thing a saint's body would do.

And here, to the left, we have Joan of Arc. Big-time saint though she is, she's not treated as such in Shakespeare's Henry VI, Part 1. She is in fact notoriously disrespected. Joan was, of course, a leader of England's enemy, the French, against English forces in the Hundred Years War, and, accordingly, the English stereotype of Joan had her as a bitch, a ho, a fraud, and you name it. Shakespeare does little to counter the stereotype in this early play, which seems to have catered largely to the anti-French feeling of his audiences. Shakespeare's Joan's a canny strategist, but is not keen to be martyred, and does her best to avoid the fate by claiming to be pregnant. It doesn't wash. She is hauled off stage telling her English captors, "hang yourselves!" The habit of maligning England's enemies' famous saints is strong in Shakespeare. Check out Santiago Matamorros, patron saint of Spain, whose name means "Moor killer." You can guess what Shakespeare character he turned into. Still, there is reason to think that in later years Shakespeare rethought Joan, if not Santiago. She, or her spirit, is redeemed in the character of Cordelia, whose name is a feminine version of "Lion Heart" ("Cordelion" in King John) and who, to save her father, fearlessly and justly leads an army from France into Britain. "O dear father," she says, "It is thy business that I go about." Though she inhabits Lear's pre-Christian Britain, she could hardly be more Christlike. Her saint does go marching in.