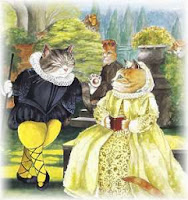 I recently talked with a friend of mine, Chuck Bentley, at the Starbucks in our local Barnes & Noble where he and his wife Donna hang out. Chuck is hands down the finest Michigan Shakespearean actor I have ever seen perform, and his skill is worthy of the major theaters of New York and Chicago, which I have visited more times than I can count. He might have gone to the big city, but he chooses to write and perform here, in Kalamazoo, participating in or organizing local productions, all the while happily championing the work of better known actors no more and often less talented than himself. During our conversation he in fact chided me for not including Nicol Williamson's Hamlet on my "Ten Best Shakespeare Performances" list last month. (I still wouldn't. But, to be clear, Nicol Williamson is not one of the I'll-Just-Do-A-Little-Shakespeare-Now actors who are less talented than Chuck. Those are different people. Like Keanu Reeves.)

Anyway, this conversation with Chuck put me in mind of some other Renaissance folk I have met, in the flesh or virtually, who hide their lights under bushels. I'm thinking in particular of scholars, often recent Ph.Ds., who are so
in love with the Renaissance that they, like me, have started bloggin' on it. In the past few months I've found several magnificent Shakespeare- or Renaissance-themed websites and blogs that are attractive, instructive, and entertaining, and which I frequently read. I'd like to credit their creators. But wait! I can't. Why? Because THEY DON'T HAVE TENURE. Or, in some cases, a long-term job. "I've been instructed to keep a low profile on social media because I will go on the market this year," says the author of "Early Modern Conversations" on her scintillating page which contains comments on teaching as well as postings for conferences and calls-for-papers. "You never know how any given department or tenure committee will feel about unconventional activities," blogs the writer of "Ex Urbe," an intelligent, scholarly site devoted to various aspects of the European Renaissance.

It's ironic that this nervousness exists in a day and age when we who teach at colleges and universities -- and middle and high schools too, I've no doubt -- are ceaselessly urged to use the web in our classrooms and our research, to update our knowledge of hypertexts, e-learning, and Blackboard, to deploy PowerPoint and oh no now it's Prezi, to Skype us in some Shakespeare discussants (if that's a word), and to take advantage of on-line books. (Two of my students last year read Othello on their phones. I know what you're thinking, but I checked. They were reading Othello on their phones.) We work in an atmosphere where every new use of "technology" is perceived as a pedagogical and research breakthrough (some are, some aren't), where faculty receive grants (some funded by Apple) to look for more ways to use computers in research and teaching, and where devoting course time to teaching "blog construction" is proposed, even though our students could teach us to do it and even though I, the departmental Luddite, managed it in three days using You Tube instructions, some baling wire, and a kit bought with Cheerios box tops. And though it's easy, clearly, to laugh at tech mania, some "net worth" is well proven. Since entering the blogosphere, I've seen that linked blogs and webpages and even Facebook conversations facilitate the spread of knowledge, information, and teaching tools in the field of Shakespeare and Renaissance studies as they do in so many other fields, speeding up, in my case, the rate at which I know who is acting what where (by which I mean who is acting Shakespeare, not who is acting Beckett), and providing me with helpful data such as, say, the opening date and list of exhibits of the Mary Rose Museum, which contains the remains and relics of the Elizabethan battleship which sank in 1545 near the Isle of Wight and was recently raised. (That's just one example. You can find the link on this blog, along with "Cats Perform Hamlet.") Why would scholars fear the professional consequences of activities that, more and more, yield professional rewards? Activities -- specifically, blogging -- that their academic employers will increasingly expect them to know how to do?

In fact, cautioning against open blogging is the latest manifestation of some faculty's well-meaning but misguided impulse to scare their colleagues out of any form of exuberant self-expression. That part's not new. For years I've heard, from professors working at various institutions, such truisms voiced: "Don't piss her off, at least not until after tenure review." (I couldn't wait.) And my favorite: "You've got to do anything they tell you until you get tenure." What? I don't know who instructed the engaging author of "Early Modern Conversations" to "keep a low profile on social media" in preparation for the job market, but I do know this. I once had a student whose email was set up to include a link to her Facebook page set in pink type, with her nickname, "Pink Bunny." When she sent me a grade inquiry, I clicked onto Pink Bunny's page and immediately saw several pictures of her reclining in a bikini in her car. I think Pink Bunny needs to keep a low profile on social media. Not you, Early Modern Conversations.

It bothers me to think new scholars think their chosen profession is so arbitrary; and their tenured colleagues so irrationally despotic that they would not only be inclined to, not to mention have the power to, fire people who disturbed them in some minor way. Call me naïve (Naïve! Naïve!), but I've sat on tenure and promotion committees and, no matter what were the members' personal feelings towards the candidates, what determined the decisions was what had been promised, in writing, would determine the decisions. That was, levels of scholarly and pedagogical achievement and, secondarily, professional service. No doubt I'll get mail telling me of shocking counter-examples -- I've heard these -- and no doubt some are real. But think about this. No matter what risk is run by not keeping a "low profile," will anyone who represses his views or shrouds her activities for six years, planning to let it all hang out "when I get tenure," still remember, when the moment comes, how to speak his or her mind? After six furtive years? He, she, you will be a different person then, and less interesting. More timid. Less valuable to your students and colleagues. Less yourself. Don't take that route.

What crowns the absurdity of scholars' blog-shrouding is that, as I've suggested above, so many specialists' blogs are so pedagogically helpful, as well as academically useful (a phrase that isn't an oxymoron to people like us). I've been told by my former chair (he wasn't fired for blogging, he got a better job for blogging, and for other interesting stuff) that more people would read my Shakespeare blog than would ever read my articles. So far 51 countries have checked in to Shakespeare in Fiction and Fact (brag! brag! not even humble-brag!), and I'm starting to think he's right. As for the anonymously authored "Early Modern Conversations" -- whose author admits it wouldn't be hard to find out who she (he?) is -- that site provides a delightful and rare forum for exchanges of views about teaching Renaissance literature, including complaints to which we can all relate ("My students are mixing up their seven deadly sins"), and expressions of joy which--well-- a few of us might share ("So excited about teaching The Faerie Queene today!"). I love "Early Modern Conversations." I'd write its author a letter of reference, if I knew her name. (Or his.) And the Renaissance historical blog, Ex Urbe, is truly stunning. (Since it wasn't hard to find out its author name's either, I'll also make the point that you can't actually disguise yourself on the Internet.) A sample of Ex Urbe's offerings includes a brilliant discussion of what's wrong with TV depictions of Renaissance Italy, a "Spot the Saint Series," a "Machiavelli Series," and a link entitled "New confirmations that Caesar was indeed killed by the Largo Argentina tram stop, where the Roman National Cat Sanctuary now is." Wow! Should I click on that, or on "NASA Vikings! With tiny satellites!"? So much medievalesque and Renaissance lore to choose from! It takes my breath away. So I'll spread the word. Look here: http://exurbe.com/?p=2176

To conclude: let's cast off all unfounded worries about blogging the Renaissance. Speak what we feel, not what we ought to say. We have nothing to fear but -- Hey, please, I'm blogging, could you shut the . . . . I'm sorry, what's that? The dean wants to see me? Um . . . . okay. Cross your fingers, and I'll get back to you all next month.
Posted by Grace Tiffany at 9:02 PM