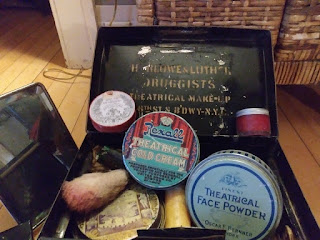 I knew instantly whose treasure this had been. My grandmother Teresa Tiffany, nee Crowley, born on July 28th, 1900 (my own birthday some six decades later), had for the entire time I knew her on this earth bragged about her experiences acting on the New York stage, while my mother discreetly rolled her eyes. "I was in the theatah!," Nana would proclaim, her arm raised high like SNL's Master Thespian,
raising herself to her full five feet and one inch of height. Nana wasn't British. She wasn't even from Boston. She was born on Long Island, but according to her, "tomato" was properly pronounced "tomahto," and "theater" was "theatah," because Sir Laurence Olivier pronounced it that way.

Although my siblings and I never knew the details of her theatrical past, we had no trouble believing she'd been an actress. She was supremely melodramatic, and thoroughly uninhibited. If one of us left the kitchen a mess, she would thunder, "GOD DAMN IT TO HELL!" In her later years, she would sit in her bathrobe, immersed in the daily newspaper, and shriek about Nixon. "I LOVE to HATE him!," she'd exult, cackling with delight the closer impeachment loomed. She doted on a certain great-grandchild and used to rage at my mother for not carefully covering up all the sharp furniture corners he might conceivably poke out an eye on. "Do you WANT the BOY to go BLIND?," she would holler, troubling deaf heaven with her bootless cries.

That particular line -- the "bootless cries" -- from Shakespeare's Sonnet 29 was one of her favorites, and somewhere in the Tiffany detritus must lie an old recording of her declaiming it. It happened this way. In the 1960s my father bought a bulky state-of-the-art tape recorder, and Nana insisted on being immortalized on tape doing her Shakespeare. My siblings, my cousins, and I, the audience, were to sit quietly on a couch in her parlor full of precious never-to-be-touched knick-knacks while she surrendered to her Elizabethan muse. But while she was performing I couldn't resist picking one of the knick-knacks up (a little blue ceramic bird, I can see it yet), and she looked over and saw me, so the recording came out like this:

When in disgrace with Fortune and men's eyes
I all alone beweep my outcast state,
And trouble deaf heaven with my bootless cries --
PUT -- THAT -- DOWNNNNN!!!!
[Peals of children's laughter, then recorder is abruptly shut off.]

To Nana's credit, she laughed at herself, too, that time, and many other times, too. She laughed as much as she shrieked. Sometimes she did both at once. We have another recording of her made on the Christmas when my brothers had each received stilts for a present. Nana came over, saw the stilts propped in the hallway, and immediately started to stride around on a pair of them, whooping and hollering in glee, completely unaware that my dad was immortalizing this moment on tape, as well. She had never been so tall!

As I got older and learned more about American  theater history, I began to see that Nana's histrionicism, which to us seemed hilariously or (when we were very young) frighteningly over-the-top, had likely been suitable for -- even schooled by -- the early twentieth-century stage. When I play recordings of Shakespearean actors of that era for my students, we all crack up at how hammy they sound. "O Desdemon! Dead, Desdemon! Dead! Ohhhhh!  Ohhhh!" But one hundred years ago, in that just-past-the-Victorian era, over-the-top Shakespeare was in style. And New Yorkers loved their Shakespeare. My grandmother belonged to an early twentieth-century ladies' Shakespeare club of the sort where women of an artistic or intellectual bent could shine. Shakespeare scholar Christy Desmet has written of these clubs, in which age discrimination was not a factor; membership might include "ladies in ages ranging from fifteen to sixty." For each other's benefit these women presented papers on "facts medical, legal, naval, military, commercial, and ethical" drawn from the plays, and some of them performed scenes or whole plays together, not stinting to reverse the old Elizabethan custom and take on the roles of male characters.

Where did they perform? In my grandmother's case, in addition to her boasted and doubtless far-from-Broadway stage experiences, she acted for fun with her fellow female Shakespeare enthusiasts. If there's a family relic that bespeaks her personality even more than -- or anyway as much as -- the Harlowe & Luther theatrical makeup box or the truncated Sonnet 29 recording, or the rusty old stilts, it's a photo I found of her and some other Shakespeare ladies performing what looks like one of the final scenes of Macbeth, in Central Park. Six women face off, brandishing stick-swords clutched in their right hands, their left hands raised in improbable fencing attitudes. They're clad not in trousers but in skirts that fall to mid-calf. The skirt worn by the woman on the right is a Scottish tartan. They've positioned themselves artfully in a symmetrical arrangement, with two poised to fight in the high background atop a rocky hill. Where's Nana? She, of course, is the one who has added to her ensemble a Zorro-esque cape and black satin gloves.

She made sure she stood right in the middle. 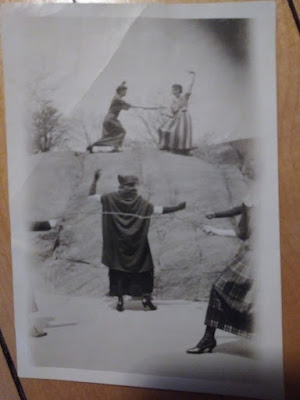 Posted by Grace Tiffany at 6:30 AM